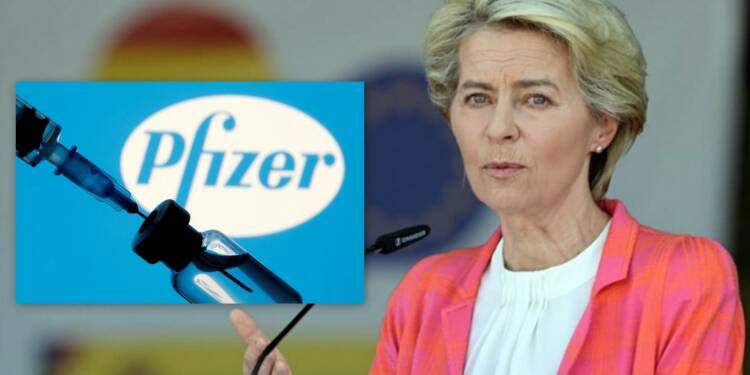 In any Hollywood movie, a close door collaboration between a big Pharmaceutical firm and the government never leads to a happy ending. It mostly has a dark turn that leads to a few people pocketing the profits off of the misery of the masses. A high profile collusion vis a vis European Commission President Ursula von der Leyen and Pfizer CEO Albert Bourla has come to light and shocked the entire democratic fabric of the European Union.

An EU watchdog found the European Union’s executive arm guilty of “maladministration” after looking into text messages sent by European Commission President Ursula von der Leyen to Pfizer’s CEO. In the verdict, Emily O’Reilly, the European ombudsman, strongly criticized Von der Leyen’s assistants for their treatment of requests for the release of texts made during vaccine purchase talks.

The disturbing fact that seems to have emerged is that the European Commission chief was okay with shoving Pfizer vaccines down normal European’s throats as long as she could make a profit out of it.

After a comprehensive check, the commission stated it had not “discovered” any text conversations between Von der Leyen and Albert Bourla, whose company expects $36 billion in vaccine sales this fiscal year. However, according to the EU ombudsman’s inquiry, the commission’s search for text message conversations was limited to an internal record of papers.

Von der Leyen’s communications were not kept there, and the commission president’s office was not questioned about the existence of any such messages. The commission later stated that text messages were not covered by EU law regarding the necessity to archive policy papers since they were “short-lived.” According to O’Reilly, the commission’s actions fell short of the essential levels of transparency under EU law.

The commission has now been ordered to conduct a more thorough search for the text messages, the existence of which was first revealed in a New York Times interview with Von der Leyen on her “personal diplomacy” in April 2021.

According to an earlier investigation by a UK-based Channel, Pfizer, an American pharmaceutical corporation, allegedly bribed experts to propagate false information about the efficacy of AstraZeneca’s Covid-19 vaccine. Pfizer is accused of funding a presentation that debunked AstraZeneca’s Covid vaccine. The Pfizer-sponsored presentation suggested that AstraZeneca’s vaccine could cause cancer and was unsafe for immunocompromised patients. The panel of experts also stated that AstraZeneca’s vaccination technique could result in the vaccine embedding itself into the recipient’s genetic code and causing malignancies.

Pfizer is allegedly selling its jab at a price that is 3000 per cent more than its production cost, according to the investigation. Pfizer is reportedly charging $30 for a single shot, even though production costs the firm only a dollar. Pfizer responded by stating that the estimate was “grossly wrong” because it didn’t account for clinical trials, large-scale production, or global distribution.

Before heading to Brussels, Von der Leyen was Germany’s defence minister, and he was embroiled in a similar issue shortly after departing Berlin in 2019. After it was revealed that one of her two cellphones requested by a German parliamentary committee had been deleted, she denied having anything to hide.

The committee was looking into whether expensive defence contracts were granted to outside consultants without oversight and whether those transactions were influenced by personal connections. Von der Leyen, who was eventually cleared of any wrongdoing, stated to the German parliament in 2018 that “negligence by overburdened staff” during her time in the ministry had resulted in “mistakes.”

Pfizer has several vaccination contracts with the European Commission. The most recent reserve an additional 1.8 billion doses for delivery between the end of 2021 and 2023 among the 27 EU member states, at a higher price than originally set. The EU has been chastised for the excessive pricing agreed for the mRNA Covid vaccinations, according to one estimate, the EU spent €31 billion (£25 billion) more than the cost of manufacture.

All these developments and the following investigation by the EU’s ombudsman prove that the European Commission President colluded with the Pfizer CEO to profit off of the misery of the European population. Going ahead, her actions should be thoroughly investigated and brought to justice.