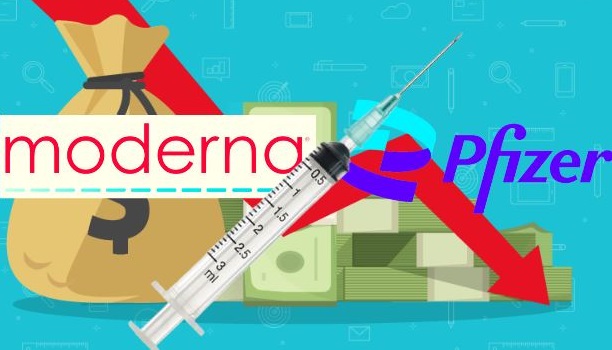 All hell has broken lose for American Big Pharma. Facing the heat in particular are pharmaceutical giants like Pfizer and Moderna, who have made a fortune by selling their vaccines around the world during the Covid-19 pandemic. Now, as the pandemic begins to wane, and as emerging variants become less severe, such champions of the pandemic have begun panicking. The likes of Pfizer and Moderna could well be staring at a destructive cash crunch soon. In any case, they have not instilled confidence among the people with their vaccines, and massive protests breaking out in Canada against vaccine and mask mandates has only made the situation worse.

In the United States too, there is growing resentment against the likes of Pfizer and Moderna. A study released by medRxiv, which is yet to be certified by peer review, recently indicated that two shots of Pfizer and Moderna vaccines offer no protection against the Omicron variant. Instead, two shots of these vaccines may register negative efficacy, following three months of getting the second dose.

But it is not just the vaccine makers that are now finding themselves faring in hot waters; the Food and Drug Administration (FDA) of the USA is also facing the same stumbling block, and has lately come under extensive scrutiny for giving its approval to the vaccines despite glaring discrepancies.

Reality has begun hitting Pfizer hard. As the pandemic begins to wane, the pharmaceutical giant is stared at the prospect of not being able to sell any Covid-19 vaccines soon. Earlier this month, Pfizer shares fell more than 6% to $50, wiping out $19 billion in market value. This fall came after an earnings report fell short of revenue projections, pulling in $23.8 billion, compared to average expectations calling for $24.1 billion.

Read more: Pfizer and Moderna could actually be having negative efficacy: That means more likelihood of getting Covid

Covid-19 sales made up around 53% of the firm’s fourth-quarter revenue. Pfizer expected $58 billion in revenue from vaccine sales in this fiscal year, but managed to earn only about $52 billion. Shortly after Big Pharma realised it would not be able to sell as many Covid-19 vaccines in the coming months, shares of Pfizer partner Bio-N-Tech and competitor Moderna plunged 9% and 7%, respectively, erasing nearly $9 billion in combined market value.

Moderna CEO Stephane Bancel has been rampantly selling his shares, almost as if he expects the world to come crashing down for his company.  His stock selling campaign began from January 29. He then proceeded to sell his shares on 4, 5, 10 and 11th February.

This was followed by the Moderna CEO deleting his Twitter profile.

Your CEO nuked his Twitter account yesterday…my educated guess that was done on the advice of in house lawyers. $MRNA

Not suspicious at all. https://t.co/zZkIpMkDaA

Panic has struck both Pfizer as well as Moderna. Vaccine sales are soon going to plummet. People around the world are rejecting booster doses. And then, the threat of investigations looms large over these two pharmaceutical giants. It is therefore not surprising that the Moderna CEO is trying to cut down his exposure and stake in the company. His actions point at a doomed future for Big Pharma. If found guilty, these companies will have to pay mountain loads of cash to the government’s coffers, and that would turn them bankrupt.