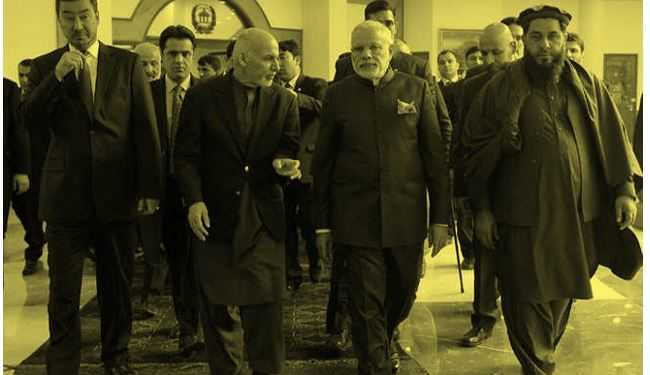 Modi ‘s Afghanistan visit hints at the 21st century version of the Great Game is being played out in Afghanistan these days. Ever since the destabilization of Afghanistan following the coup and the revolution in the 70s, both India and Pakistan have tried to ally themselves with successive Afghan governments to meet their strategic objectives. This policy led India to support the pro-Soviet regimes in Kabul, while Pakistan overtly financed and backed the ultra-conservative Mujjaheddin.

During the civil war in the early 90s, India supported Najibullah and the Kabul government, while Pakistan aided and abetted the Taliban. Even after the Taliban overran Kabul, India continued to support the anti-Taliban Northern Alliance led by Ahmad Shah Massoud. India refrained from militarily supporting the American invasion, but quickly recognized the new dispensation in Kabul. Pakistan on the other hand, while claiming to support the democratic government at Kabul has continued to allow non-state actors to add to its woes.

For India, a stable Afghanistan is of a great strategic advantage. For starters, a democratic and India-friendly Afghanistan is a strategic lever against Pakistan. Secondly, a peaceful Afghanistan would be more likely to stem the flow of foreign terrorists into Kashmir. Thirdly, Afghanistan can be a prominent pro-India voice in the Muslim world, where Pakistan is a major player and lastly, a strong, prosperous Afghanistan can serve as a second front to tackle Pakistan’s nefarious agenda.

It is light of these strategic reasons that Prime Minister Narendra Modi’s visits should be seen. This was Modi’s second visit to Afghanstan in 6 months. Incidentally, Modi had invited Hamid Karzai, then President of Afghanistan for his inauguration.

Modi is going out of the way to reassure Afghan people that unlike invaders of yore, India is only interested in peace and stability of their country.

This has resulted in India enjoying widespread support among ordinary Afghans. A few days before flying down to Herat, Modi was in Teheran, putting his signature to the development of Chabahar port that would open up another route for deliveries to and from Afghanistan. Chabahar port would also rival Chinese developed Gwadar port in neighboring Balochistan and is key to liberating Afghanistan from the clutches of Pakistan. India also recently hosted a Heart of Asia conference which serves as a platform for discussion of regional issues between Afghanistan and its neighbors. India is also the 5th largest international donor to Afghanistan. Afghanistan is today the second largest recipient of Indian aid in the world. This has generated tremendous goodwill for India. Over 71% of Afghans view India positively as per a Gallup poll. A highway linking Delaram to Zaranj and en route to Chabahar is already in progress. Modi’s emphasis Indo-Afghan relations in a way continues to build on Vajpayee and Manmohan Singh’s legacy, except that Modi’s greater action-orientation means that speeches and intent statements are translated into action on the ground.

For Pakistan, India’s increasing engagement with Afghanistan are ominous signs. Already, Pakistan has made its displeasure clear. Even before Modi took office, Pak-sponsored militants attempted to storm the Indian consulate in Herat. The embassy in Kabul has been attacked in the past, while the consulate in Jalalabad was targeted only months ago. This is a clear sign of frustration among Pakistani politicians, army men and ISI operatives. Pakistan has routinely blamed Indian consulates in Mazar-e-sharif, Jalalabad and Herat as being nests of Indian espionage activities from where trouble is being fomented in the disturbed Baluchistan region.

A pliable Afghanistan is in Pakistan’s interest as Pakistan would not like to see a repeat of the 60s, when Afghan leaders periodically demanded the return of Pashtun territories from Pakistan and supported separatist politicians in Pakistan’s NWFP. Pakistan therefore sees Indo-Afghan amity as nothing more than a second front for a proxy war between India and itself. Undoubtedly, growing India-Afghan friendship also unsettles China, which heavily banks on Pakistan as a tool to destabilize India. Also, China and India have historically found themselves on opposite sides of the table as far as Afghanistan is concerned.

Modi must continue to build on its soft power by investing heavily in social and infrastructure projects. It must also ensure that it is able to meet deadlines and prevent cost overruns to further strengthen its image as a responsible international partner. Additionally, India must aid Afghan self-reliance by training of Afghan troops. For years, Afghanistan has been blighted by war and infighting. India’s gentle touch along with the support of the international community is crucial to prevent the ancient land of the Afghans from sliding back into the chaos of the past.