A tale of Three Cities: New Delhi, Washington and Beijing 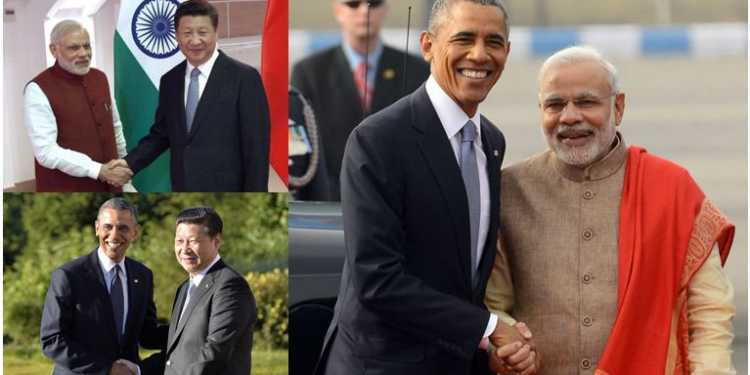 A few days ago, PM Modi addressed the US Congress at Washington, in a speech that can only be heralded as an orator’s dream and encapsulated everything that India as a nation wanted to present to the world but had failed in the past. The incessant applause and accolades that the US Congress doled out by the dozen were more than enough to put the nation into a frenzy with social media buzzing with the “‪#‎ModiInUs‬” and the last words of his speech seen it every 2 out of 3 Facebook statuses and tweets. While people back here did try to downplay the PM’s, nay, India’s Achievement and tweeting negatory and often irrelevant responses to his words, the verdict of the masses was clear. The Om PM had won heart’s everywhere.

One of the important points raised in the speech that consisted of talks from “maintaining peace in the sub-continental region” to “negating terrorism and delinking it from Religion” was that of India becoming a sort of a defense partner of the US. While US has military presence in Pakistan and the Middle-East, what it lacks is an economically independent, growing and potentially enormous market of 1.25 Billion people. New Delhi is easily the Washington’s best bet to increase and create a potentially dominating effect in the entirety of Asia, especially due to its location being so strategically close to its apparent rival, People’s Republic of China. It is obvious that after Russia and China, both of whom are the USA’s diplomatic and sometimes military opponents, India is the largest, most important country in Asia as per its size and twice so as per its potential. And the USA can only profit by linking itself to India, especially in defense.

On the other hand, there is China. The Sino-Indian border issue is as old as India’s Independence itself and hasn’t been satisfactorily resolved even after 18 bilateral talks. And in the past two decades, Beijing’s growing friendship with Pakistan (apparent by the huge investment China is channeling in developing the infrastructure across ‘Aksai Chin’ and ‘POK’ and their support to Pakistan in the Pathankot issue at the UN), and their growing presence in the Southern countries, especially the South China sea and the Indian Ocean, while not an open declaration of hostility, is still a grave warning to New Delhi’s security. Also their presence all across the countries surrounding India is a potential threat to the national security as well as the diplomatic ties that Indian holds with these countries. For eg. As the PM mentioned, that India was indeed one of the first countries to rush to Nepal’s aid when it had been devastated by the Earthquake. What remained unmentioned was that Beijing and New Delhi were both the first to respond to this tragedy which subsequently lead to some geopolitical tensions between the two countries.

The defense partnership bill between New Delhi and Washington (which the US Congress has as of now rejected, due to a Republican majority) could have been, by all means, seen by Beijing as a potential disruption of the long, hard-achieved diplomatic level that New Delhi has gained with Beijing. Earlier in 2014, while in Japan, PM condemned the “expansionist tendencies of few nations”, a jibe clearly aimed at China. While the PM had openly expressed that he was impressed by China and emphasized the ardent need for stronger, more strategic bond of diplomacy and friendship between the two countries, even before he had decided to run for India’s highest elected office, his interest now seems more towards the USA (The PM has traveled to US thrice in two years now, making it more than any PM before him). It could be simply because Washington is more responsive and more in alignment with India’s ideology of governance, or it could be that China has time and again hindered India’s advance on an international platform (eg. The World Security Council, NSG etc.)

This apparent closeness obviously has its pros. One of which is that New Delhi has increased its defense alliances with Washington under the Modi government (eg. Logistics Assessment Agreement) and could lead to a partnered patrol of the South China and East China seas by the US and India.

On the other hand, due to the growing proximity of New Delhi with Tokyo and Washington, can be construed as a move against Beijing.

Another con is that with the level of increase in defense alliances with the US, could also lead to the alienation of India’s most powerful and long-time ally, Russia.

While many see this as New Delhi’s attempt to play on Beijing’s fear of India joining the ranks of countries like Japan, South Korea, Australia etc, who are considered to be America’s stooges, but it can be realized that making enemies with the second largest economic and military power in the world would be the most unwise thing to do for a still developing country like India.

Whatever the reason, the rejection of the bill, comes as both, a wake-up call for India to realize that it still not in a position to be the Washington’s closest ally and a blessing in disguise, as it prevents potential hostility from one of our most powerful countries in the world who is also our neighbor. What remains to be seen is will the Beijing respond to this growing closeness to Washington in a positive manner i.e. take India’s security concerns related to the border and surrounding issues seriously or will it lead to another Sino-Indian war in the long run, is something that remains to be seen. What can be surely said as of now is that India needs to play the triangular diplomacy game really carefully.