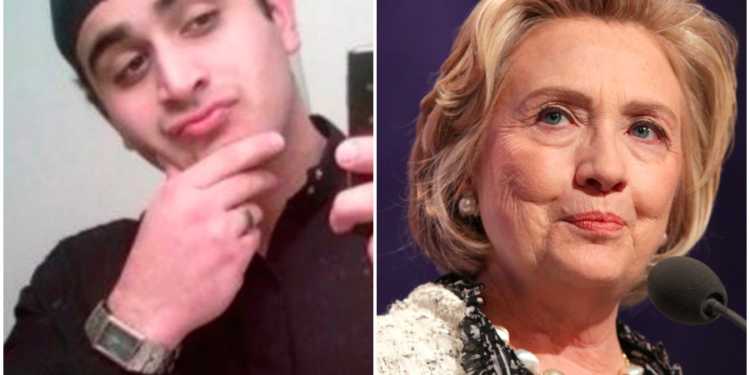 2016 shall be remembered as the year when Global Mainstream Media definitively lost every shed of the little credibility it had left and its ideological inclinations and collusion with specific political parties were laid bare for everyone to see. And at the center of the great shift was of course the American Presidential Elections of 2016. On one hand is Donald Trump, whose every little word is blown out of all proportions and demonized at every step and on the other is Hillary Clinton, the Mother of Corruption and face of everything that is wrong with the Washington establishment whose transgressions are excused everyday by the Media.

Very recently, the father of Omar Mateen, the Orlando Shooter, who shot dead 49 people at a gay bar was spotted at a Clinton rally enthusiastically endorsing the Democratic Presidential nominee. It’s perhaps one of the lowest point of a democracy where the father of a Jihadi who openly displayed his own hatred of homosexuals sits in one of the front rows of a Presidential nominee and enthusiastically endorses her for President. Remember the outrage the media perpetuated when Donald Trump was endorsed by a member of the KKK? Compare that with the nonexistent outcry against Hillary Clinton over the endorsement she received from the father of a terrorist. Of course, the Hillary campaign has disavowed the endorsement but so had Trump. The stark contrast in the treatment of the two candidates has revealed the extent to which collusion exists between the media and political parties.

The entire time the left liberal establishment and the media was busy crying foul and manufacturing outrage over Donald Trump ‘s alleged disregard for democratic principles, it was Hillary Clinton’s campaign which actually flouted every democratic principle and indulged in rampant corruption to score a victory over Bernie Sanders in the primaries. Sanders was basically robbed of even the remotest chance he had against Hillary Clinton by the DNC which had already decided on their Presidential nominee even before a single vote was cast in the primaries.

As Wikileaks revealed, the Clinton campaign actively used the media to award her an unfair advantage over her rival, Sanders.

The Wikileaks release of the DNC emails would have effectively led to the crucifixion of any presidential candidate by the media. But as the whole event has revealed, the Clintons basically have the media in their pockets. The leaks which led to the resignation of the chairperson of the DNC hardly attracted the widespread outrage the media normally generates over something so, for the lack of a better word, juicy. The liberal establishment which loves to cry racism over every chance it gets conspicuously ignored the blatant racism embedded in the leaked DNC emails. The media was also conspicuously shallow in its approach to the Clinton campaign’s plan to out Sanders as an atheist to harm his voting prospects. But then again, the DNC leaks also revealed that the mainstream media is effectively sold out, so that explains everything.

Paying minimal attention to the 400 million dollars paid by the Obama administration to Iran, in all probabilities, as ransom, the media has found something else to demonize Trump with. Apparently, Donald Trump has called for the assassination of Hillary Clinton.

Donald Trump said in a rally, “If she gets to pick her judges, nothing you can do, folks. Although the second amendment people, maybe there is, I don’t know. But I’ll tell you what, that will be a horrible day.” The liberal establishment drove itself to an orgasmic frenzy latching on to anything it could find, the slightest possibility to divert attention from the failures of the Democrat establishment and the corruption infested DNC.

Wikileaks has dropped a bombshell after it announced Clinton aide Humd Abedin had access to the the Clinton email address used for classified emails. This alone would be sufficient to ensure her conviction in a fair world but since it’s Hillary Clinton, she will get away nice and easy.

On top of that, the Clinton campaign seems to be mired with mysterious deaths. Wikileaks has announced a reward of 20k dollars for any information that leads to the conviction of the murderer of DNC staffer Seth Rich. Conspiracy theories have run abound on the internet about a possible political link to the murder and Wikileaks announcing a reward for information might just have led to a glimmer of hope in circumstances where there were none.

Meanwhile, the Clinton campaign has found a very convenient way of dealing with the DNC leaks. According to the Democrats, everyone is a Kremlin agent. Donald Trump, Julian Assange, Jill Stein, basically everyone against Hillary Clinton is a Kremlin agent according to the Democrats. Instead of addressing the issues raised by the leaks, the Democrats have resorted to doing what they do best, character assassination of their opponents to achieve their objective. And the mainstream media which is in the pockets of the Democrats merrily obliges without so much as a whimper. It’s not really a surprise then that public trust in the media is at an all time low and it does not look good for mainstream media anytime soon.