Why Modi’s Vietnam visit is giving headache to Beijing? 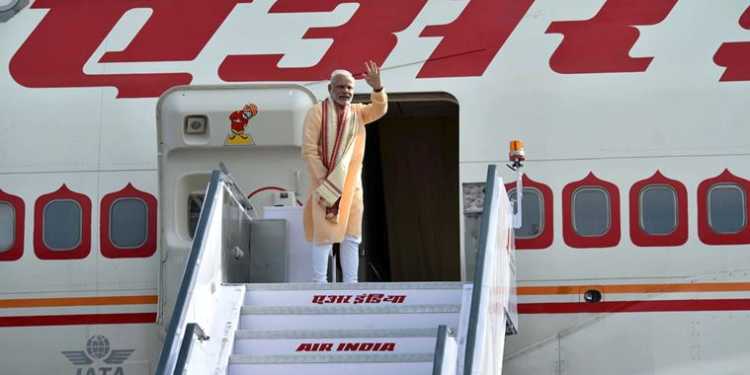 The Prime Minister, Shri Narendra Modi emplanes from New Delhi for his bilateral visit to Vietnam and G20 Summit in China, on September 02, 2016.

The year was 1979. Vietnam, at that time was just emerging from the decades of war and bloodshed. Under Morarji Desai’s leadership, India felt that the time was right to reach out to Vietnam and underline the friendly relations between the two countries. A relatively younger Atal Behari Vajpayee was at the helm of India’s foreign policy establishment and was asked to make the visit to Hanoi in February 1979.

The visit would be the first by any Indian minister since 1960. As fate would have it, China chose this exact moment to launch its bungling invasion of Vietnam. With Chinese troops pouring into NorthernVietnam, Vajpayee and his entourage had no option but to unceremoniously flee the war zone for safety.

Deng Xiaoping, China’s then supreme leader chose to rub it in by saying that China had taught Vietnam a lesson just as it had disciplined India in 1962. Then, as today, China continues to be the invisible but omnipresent elephant in Indo-Vietnamese ties. As Prime Minister Narendra Modi embarks on his Tour, China is once again flexing its muscles over the issue of South China Sea issue. For India, Vietnam is an indispensable cog in its Look East/Act East strategy. For starters, both nations, while active trade partners with China, feel routinely threatened by Chinese belligerence and border claims.

Secondly, the 2 countries have seen increasing trade in recent years, making it among India’s top two trading partners in ASEAN. Thirdly, Vietnam, especially erstwhile North Vietnam enjoyed India’s support during the years of Vietnam War, which, given the eventual victory of North Vietnam has worked to India’s advantage.

India’s relationship with China, in spite of all of Modi government’s maneuverings continues to be shaky at the best. China’s recently successful attempt to block India’s NSG membership has not gone down well with the Modi government. Additionally, China’s blind support for Pakistan, including opposing UN proscription against Pak based terrorists, its raking up of the border issue among others have not endeared it to Indian public.

Despite its public pronouncements on better relations with India, China continues to cozy up to anti-India forces and directly or indirectly threaten India. In fact, this is a key feature of China’s diplomatic strategy that aims at containing India. India now seems to be taking a leaf or two out of Chinese strategy.

PM Narendra Modi’s visit to Vietnam, at a time when Sino-Vietnamese relations are not at their best seems to be a part of this strategy.

In addition to discussions on trade and business, reports suggest that India will try to sell its defence equipments, including Brahmos missiles (which India recently set up in Arunachal, much to China’s chagrin) to Hanoi. India is also likely to pledge support to its overhaul of its defence mechanisms.

Vietnam is rife with anti-China sentiments, given China’s bellicose attitude on the South China Sea dispute. India would do well to channelize this sentiment to build a strong mutually beneficial relationship with it. Some strategic analysts see Vietnam as a part of India’s attempts to contain China, just as China uses Pakistan as a tool to contain India.

Vietnam has firmly been a part of India’s strategic vision since the days of Vajpayee government. In 2000, the then defence minister, George Fernandes had asked for India to build Naval presence in Vietnam and to provide training and weapons to it.

Over the years, attempts were made by both countries to strengthen trade relations as well. Bilateral trade with Vietnam reached $7 Billion in 2015 and targets $15 billion by 2020. India is one of Vietnam’s top 10 trading partners. In 2011, India signed an agreement to carry out oil exploration in South China Sea and refused to get cowed down by Chinese threats. 50% of India’s trade happens through the South China Sea, thereby establishing the criticality of Vietnam to India. PM Modi’s 2014 visit to the country resulted in a $100 million credit being extended to Vietnam to allow it to buy defense equipments from India.

On its part, Vietnam has been supportive of India’s UN bid. It is also expected to sign comprehensive agreements on areas such as Cyber security, Pharmaceuticals, spirituality, health, trade etc. India has already backed Vietnam’s position on South China Sea. PM Modi, in his address to US congress had explicitly called for “security of the sea lanes of commerce and freedom of navigation on seas” with reference to Indo-US relations. The 2 countries both enjoy friendly relations with the US, which adds further strategic weight to their mutual relations.

Vietnam has been a part of India’s cultural sphere for centuries. The ancient kingdom of Champa took inspiration from India’s cultural treasures. In recent times, India has expressed support for the cause of Vietnamese people. Slogans such as ‘Amar naam, tomar naam, Vietnam, It used to reverberate on Kolkata’s streets, as would ‘Ho, Ho, Ho Chi Minh’ (We shall fight, we shall win)’. At the height of the war, the name of the street where US Embassy was located was changed to Ho Chi Minh Sarani to spite an ideological foe. Such anecdotes might belong to the past but sky is the limit for Indo-Vietnamese relations.

The inevitable partition of Pakistan

China’s power is overrated and Chinese culture is a myth