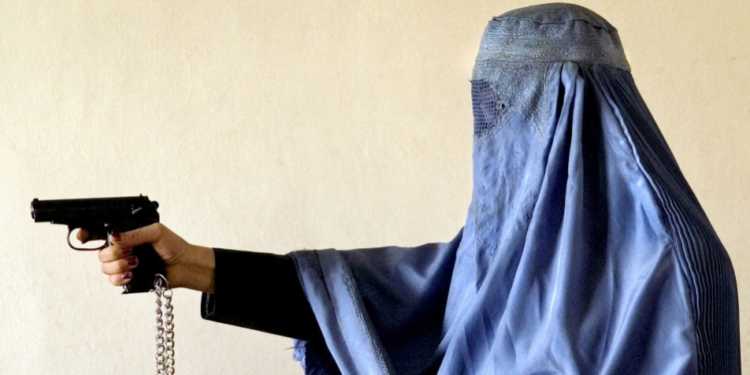 A recent development of Jihadi commanders being shot dead by gun wielding Burqa clad women has forced the Sharia advocating ISIS to release an order preventing women in burqa from entering its security and military centers banning burka in the Iraqi town of Mosul.

That the ISIS, which propagates the ruthless infliction of violent forms of terror and torture on women for not wearing the Burqa and the Niqab has today conveniently denounced their religious diktats and has accidentally reiterated to the world that the Burqa is indeed a security threat for them today, as anti-terror operations are now countering them in their own language.

It is a paradoxical that while ISIS finds Burqa clad women a threat to their own terror factories, they preach otherwise to their gullible supporters across the globe that go around pitching the minority victimization card, proclaiming to the world about how their religious identity is at stake when states implement religion neutral dress code policies in the interest of national security and right to freedom for women.

It may seem absurd for Governments to be prescribing dress codes which is part of freedom of expression as no one can impose or decide as to how much is too much and how much of religious symbolism one can carry off in public life but it is the spirit of pluralistic societies to place the social norm above the religious traits in the interest of a harmonious living. But the hypocritical hegemony that blinds people with a crocheted eye piece of religious fanaticism today, reeks of oppressive diktats of unscientific orthodox rigidity under the garb of overt modesty so much that they are indifferent to the cause of public hygiene, societal welfare or even national security.

After many terror strikes in the recent past, a new law was passed that required car owners in India to do away with tinted window shades as a precautionary measure to keep check on terror activities, which was duly obliged and conformed to by large number of commoners even while it compromises their privacy, it is another thing that many politician’s and VIP vehicles still roam around with the darkest shades of tinted glasses.

Coming back to the current topic of the senility of imposing or banning of burqa, while it is an individual’s prerogative to choose his or her social outfit, it is important that they fall in line with the social norm of the society at large just like how other non-muslims conform to the religious rules in the middle eastern countries.

The recent furor about Muslim women wearing burqa on a Briton beach was perhaps spontaneous as people constantly live in fear of being struck by terror, what if a potential terrorist disguises in a burqa? Also their non-conformity to social etiquettes in a society reiterated the fact that other’s safety and hygiene aspects were immaterial or irrelevant to the pro-regressive minds hell bent on flaunting rabid religiosity.

The western world is still learning to cope with a sardar’s turban or a Muslim beard but any justification to chokingly cover one’s face completely, is bereft of any sane logic as is not only a security risk but an identity crisis for many women who do not have a platform to voice their honest opinions.

Italy, Belgium, France struggled with culture clashes, security, law and order problems until they banned the burqa, as persons caught shoplifting or in other crimes in burqa could not be identified even on camera and even when caught they created ruckus to reveal their faces to the cops quoting religion, educational institutes complained of not being able to make eye contact with students to ascertain if they understood the concept or not.

Turkey and Germany are still struggling in the tenets of the black tents, while some elite women argue for burqa in totality and a few others have opted to revolutionize the burqa into a hijab that covers only the head, the fact remains that large number of Muslim women around the world and India in particular are suffocated and suppressed beneath the veils and are in need of reforming revolutions.

In the Indian scenario although most top heroines of the 60s 70s and 80s were from the Muslim community with actresses like Suraiya, Waheeda Rehman, SayraBanu, Mumtaz, Zeenat Aman, Madhubala(Mumtaz Jehan), Nargis(Fatima Rashid), Meenakumari(Mehjabeen Bano), Shabana Azmi, dominated the Indian cinema with their glamor, charm and beauty and still continue till date with the likes of Katrina, Asin and various others, however, the overt religious fanaticism that was not heard of, back in the 80s is suddenly reversed, today, kids as young as 6 years are seen in hijabs/veils in India. In fact the full-fledged Niqab itself was quiet uncommon in the past as people were more liberal perhaps and showed their face. It is another thing that many young women today walk in and out of their homes in burqa but pack it up once into the outside world which proves that they are bound by dominating religious narratives but what is alarming is how is this reverse trend of regressive mindsets only growing widespread in this modern day world?

Interestingly it is the western foreign policies for supremacist regimes that gave birth to the likes of Taliban and ISIS that has restored the focus on fanatic fundamentalism and reinvigorated the loud Beards and Burqa debate with absolute conservative strokes of Islam vs the world. It is no rocket science to understand who funds these desert thugs that have assumed international importance overnight without any technological prowess of their own but only with a Wahhabi narrative and borrowed arms.

Who lays the actual canvas for the ISIS activities through their jihadlets like Zakir Naiks? Have you ever heard of ISIS in China or Russia or Japan or North Korea?

After rubbing enough shoulders flaring sparks of power egos and draining enough oil wells from the gulf by interfering and sabotaging the local rulers who dared to say no to the west, the US, Israel, UK, Russia have under the pretext of saving humanity from alleged autocracy of dictatorial rulers have reduced the Islamic states into a headless den of radical rabbis who are nothing more than paid religious moles in their foreign policies.

As to why a certain practice is prevalent be it food or clothing or other habits, depends on geographical resources, climatic conditions, social and cultural ethos of a society that largely forms the basis for social practices and cultural traditions.

A face covering head gear or an overall tent like sheet of cloth was perhaps a social practice to save themselves from the harsh and extreme climatic conditions like a sand storm or the excruciating cold nights or the scorching days in the deserts, during times when no modern amenities or technologies were available. If you notice Arab men cover themselves in white robes and a Keffiyeh and the women are drowned in various forms of tent like entire body veiling which is today known as the Burqa. This veiling practice denoted a social status many thousands of years ago even before Islam arrived where only the royal aristocrats used to wear it perhaps for privacy from public glare or perhaps only they could afford it. Soon it became symbolic with class and the slave class were brutally punished if found to be wearing the veil. The veil was uncommon until the 10th century when the Mamluks of Egypt enforced it on their women as a restrictive measure as women were then taken away as trophies upon winning battles. The suggestive regality of the veil became a regressive and compulsive symbol owing to their own shortcomings of practices like polygamy that made them live in constant fear of losing out their women to other competing males. And it was the inability to protect their women that led to restrictive measures of curtailing the freedom of women, which was much easier as compared to fighting mighty invaders. As Islam spread, they carried their social practices along irrespective of its relevance in tropical or moderate weathers they lived in.

Also the European interference made the local tribes to fanatically take pride in their social customs and wear it on their sleeves to flaunt it as a symbol of rebellion.

Today a social practice has been turned into religious fanaticism by soul harvesters and power brokers where any logical reasoning or scientific approach or security reasons ends at the doorstep of reproachful radicalism.

For whatever reasons the burqa came into existence, today it is certainly a symbol of suppression of women confining them to the patriarchal dogmas and social stigmas denying them the basic privilege of seeing the world without any religious filters.

Now that the guardians of Islam _ the Sharia enforcers themselves have realized a little late in the day though that Burqa is certainly a security threat, will its marketing officers in the rest of the world follow suit!

Unmasking Malala Yousufzai: Want to see her deplorable side?