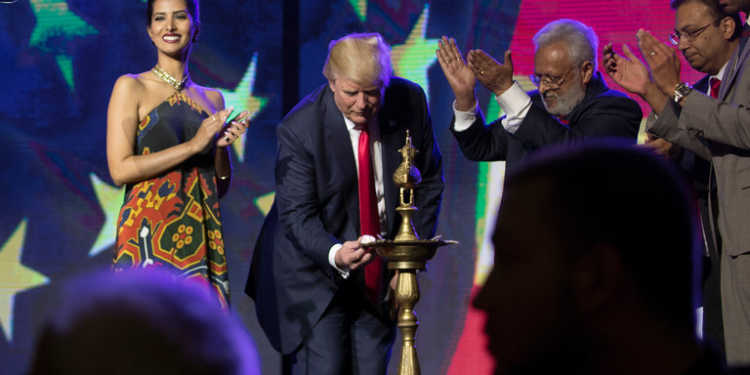 On the 15th of October, Donald Trump, the Republican Presidential Nominee addressed an Indian audience in an event organized by the Republican Hindu Coalition at Edison, New Jersey. The atmosphere at the charity event was a celebration of the Indian identity with Bollywood music and dancing and Samosas and beautiful women in Sarees. Our very own Prabhudeva graced the event with a thrilling performance which was much applauded by the audience.

Traditionally, Indian-Americans have been a demography that by and large swung towards the Democrats. The attendance comprised of about 5000 Indian Americans and there was no dearth of enthusiasm or ‘Hindus for Trump’ banners and T-shirts among the crowd.

US presidential elections 2016-I: Iowa and its implications

The ‘Hindus for Trump’ camp have also been trying to raise awareness about how Hillary Clinton ran a vicious campaign to malign Narendra Modi’s reputation in 2012 and prove his involvement in the 2002 riots which came to nothing.

Before beginning his speech, which lasted a little over 10 minutes, Trump lit a ‘diya’, a symbolic act which would not have gone unnoticed by the audience. In his typical style, with great swagger and confidence, Trump declared, “I am a big fan of Hindu and I am a big fan of India. Big, big fan.” It was the first speech by a Presidential nominee addressed specifically towards Hindus and NRIs in this election cycle. The Donald ended his speech with a resounding, “We love the Hindus. We love India.”

Trump went on to talk about his business transactions in India and his desire to establish greater trade relationships with our country. Trump promised that under his administration, Indians will have a true friend in the White House and compliment the contribution of the Indian-American community towards his country. “Under a Trump administration, we are going to become even better friends,” declared. “In fact, I’ll take the word ’even’ out because we are going to be best friends. There won’t be any relationship more important to us.”

Donald Trump then congratulated India for its efforts towards combating terrorism in the region. He labelled the attack on the Indian parliament as outrageous as he assured that under the Trump administration, the USA would stand shoulder to shoulder with India in their fight against Radical Islamic Terrorism. He again condemned Hillary Clinton on her refusal to use the specific term for the malaise that afflicts much of the civilized world today.

Donald Trump in his address extolled Narendra Modi in his speech and said that he looked forward to working with the Indian Prime Minister. Trump declared, “I look forward to working with Prime Minister Modi, who has been very energetic in reforming India’s bureaucracy. Great man. I applaud him for doing so and I look for doing some serious bureaucratic trimming right here in the United States. Believe me, we need it also.” Donald Trump’s admiration for Narendra Modi is not new. In 2014, as he briefed journalists on his Trump Tower in Mumbai, he had predicted that money will pour into India and foreign investors would return after years of slow economic growth. Donald Trump had declared then, “I have not met him, but your new PM has done a fantastic job of bringing people together.”

The NRIs face an interesting choice in the US Presidential Elections 2016. Donald Trump, it seems as of now, would get along quite well with the Indian Prime Minister and there’s no reason for us to believe otherwise. On the other hand, there are the Clintons with their 25 year history of furthering Anti-India policies. However, the turmoil that Donald Trump finds himself in at present with the leaked video of his derogatory remarks towards women and a series of sexual assault allegations against him, some which have been proven fake, makes him less appealing to some. Moreover, the collusion of the media to elect Hillary Clinton to the White House might go a long way in convincing the voters to vote for her. However, from a strictly Indian perspective, we should much rather hope it is the Republican candidate who succeeds Barack Obama to the as the President of the United States of America.