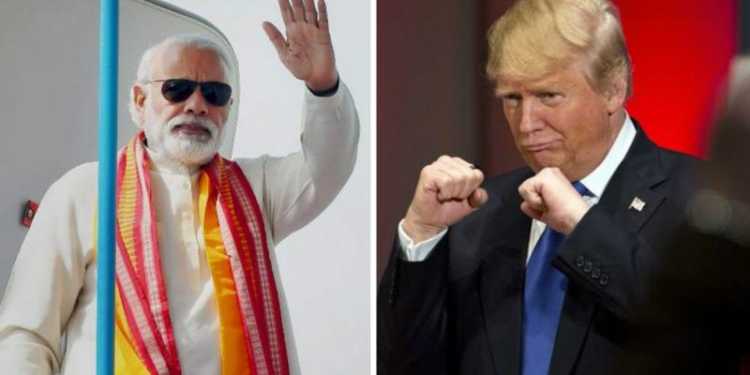 The rise of Nationalism across the world which began with the Modi Wave in India has evolved into a stunning victory for Donald Trump in the United States of America after a shock Brexit mere months ago which has shook the foundations of Globalism to the very core. Unsurprisingly, there exists remarkable similarities between the Rise of Trump and the Rise of Modi which are worthy of much contemplation.

To avoid any confusion, I want to clarify that I am not drawing any similarities between Narendra Modi and Donald Trump, only the events and the phenomena that led to the rise of the two World Leaders in their respective countries.

The very obvious similarity between the two campaigns that pop up in our minds instantly is the remarkable disdain that the elitists bear for these two men. While Narendra Modi had to endure unsavory remarks for his humble beginnings as a Chaiwala, Donald Trump was subject to much humiliation for his manner of talking and interaction with his followers on Social Media which were deemed unworthy of a man running for Presidency. While Modi was mocked for his heavily accented English, Donald Trump was ridiculed for his ‘volatile’ temperament and his brash mannerisms. To cut it short, Donald Trump and Narendra Modi were treated rather condescendingly by the elitists for exactly the same reasons which contributed to the surging popularity of these two leaders among the masses in their respective countries. It sure does say something about how the elitists perceive the masses, does it not?

The most interesting similarity between the Rise of Trump and the Surge of Narendra Modi is perhaps the two unique internet movements that have been shoved into the limelight by their respective campaigns. The Internet Hindus which contributed massively towards generating a Modi wave and countering the Anti-Modi campaign by the media is paralleled by the Alt-right in America. Despite the glaring differences between the two movements, there are remarkable parallels which cannot be ignored. Both these movements led to the absolute dominance of their respective candidates on Social Media and went a long long way in countering the media narrative. The Alt-righters even drove the narrative of the mainstream media at times with their memes and abrasive antiques. The Internet Hindus are explicitly Hindu Nationalists while the Alt-righters are staunch White Nationalists. The Alt-righters even gathered enough momentum to be honored with a condemnation by the Democrat candidate herself! What more could one ask for? Despite obvious similarities, there are overwhelming differences between the two movements which should not be ignored. The subject is so interesting in itself it deserves a much more detailed comparison. Perhaps, I shall try and elaborate on this subject in a separate article.

The Rise of Trump in America and Narendra Modi in India also marks the annihilation of the credibility of the Mainstream Media. The MSM in America maintained a relentless onslaught on Donald Trump throughout his Presidential campaign while colluding with the Democrats to ensure a Clinton Presidency which was eerily similar to the treatment that Narendra Modi was meted out. While Wikileaks produced undeniable evidence of the collusion between the MSM and the Clinton Campaign, Indians had more than enough reasons to suspect a violation of journalist integrity by certain outlets due to their biased coverage. Even the candidates themselves did not shy away from hitting out at the media on certain occasions. While Narendra Modi was quite graceful with his attacks, Donald Trump was.. well, Donald Trump. The media and the pollsters had completely written off the Donald’s chances even until the day of elections while they had heavily underestimated the sheer magnitude of Modi’s victory at the polls. Another obvious similarity is the mass hysteria that was peddled by the MSM in the two countries to undermine the respective campaigns. It reached a point where anyone who treated the words of the MSM as gospel truth would have lost complete touch with reality. In more ways than one, the MSM played a crucial role in the Rise of Modi but in the case of Trump, it might well have handed him the Presidency.

The liberal meltdown at the prospect of a Trump Presidency and Narendra Modi as Prime Minister is also worth pondering upon. And the audacious comparisons to Hitler is the least of them. While the liberals in the United States have led themselves that apocalypse is upon us with Trump’s election, fortunately, the liberals here are not as dense. However, the whole charade of minorities under threat and liberty at peril that Indian liberals cried themselves hoarse about over Modi bears close resemblance with the paranoia that has gripped the American liberals with the ascendance of Donald Trump. Celebrities who had condemned Narendra Modi are matched by their American counterparts whose hollow admonitions fell on deaf ears as well. Intellectuals in both nations left no stone unturned to undermine the two candidates and yet, the masses let their voices heard loud and clear.

Donald Trump and Narendra Modi are matched even by the nature of their opposition. Hillary Clinton represents everything that is wrong with the political establishment and the same can be said about Sonia Gandhi. Both represent the dynastic politics that the masses had grown tired of. Wikileaks has revealed the Democrat Party as a den of corruption and the Congress’ close ties with corruption needs no elaboration. The opposition are even matched by the vote banks they appeal to, while Donald Trump and Narendra Modi relied on the majority community to propel themselves to victory, Hillary Clinton and the Congress Party appealed to the various minorities. Even the alternatives that were presented as credible choices for the Presidency and Prime Minister are more than evenly matched. On one hand, we have Hillary Clinton whose only great achievement is being married to a former President and is one of the most reviled and ridiculed figures in American politics today and on the other, you have Rahul Gandhi whose only achievement is being born into the Gandhi family and his reputation of being an urban idiot is well documented.

Narendra Modi’s critics have always compared him to Donald Trump as an insult but genuinely, I have always regarded Trump to be Narendra Modi minus his grace and etiquette plus theatrics and general lack of composure. Donald Trump’s slogan of ‘Make America Great Again’ bears great semblance with the message of hope and prosperity that Narendra Modi enshrined in his campaign. We can even expect the same things to happen during the Trump Presidency that has transpired in India over the last two and a half years. But one has to admit that the compared to circumstances in India, the intolerance displayed by liberals America post Trump’s victory seems to be on steroids. Intellectuals and celebrities are continuing with their rabid fear mongering and Americans are currently in a state of mass hysteria. Like Modi, Trump has his work cut out and anything less than that would leave his supporters thoroughly disappointed. Hopefully, Donald Trump will succeed in MODIfying America just as Modi has TRUMPed his critics.