What to make out of the Pakistan Russia bonhomie? 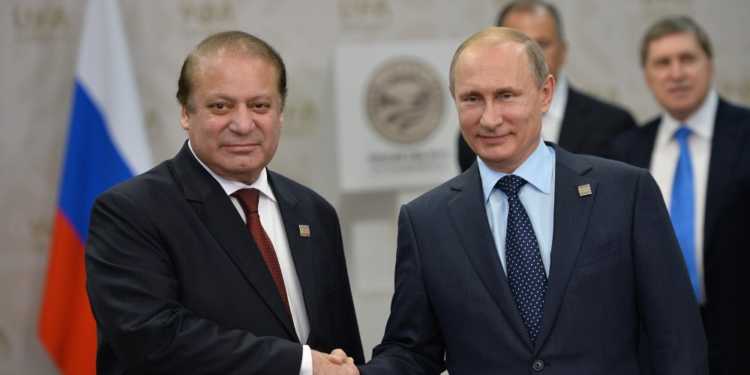 Image Courtesy: Official website of Russia's Presidency in the SCO in 2014-2015

In a surprise move rattling India, Russia has shown great interest in part of CPEC, and is working rapidly towards being a part of the USD 51 billion project that aims to facilitate trade along an overland route that connects Kashgar and Gwadar, through the construction of a network of highways, railways, and pipelines. Pakistan has already dumped USA in favour of China as its most valuable ally, after it had double crossed USA on many fronts after taking USD 18 billion in over 15 years for ‘’war on terror’’.

Russia is also working with China, using the capacity of both as permanent members of UNSC to delist Taliban from UN sanctions, in order to bring peace to Afghanistan by brokering talks between Taliban and Afghan government. Both of these formed a part of the tri party peace talks in Islamabad on this issue. This can only mean these three backing Taliban for a big role in Afghanistan government. Interestingly, Afghanistan was not part of the discussions, causing concerns in Kabul. The joint communique, however, said all the three countries agreed to proceed with consultations in an expanded format and would welcome the participation of Afghanistan.

All of this is severely against the interests of India and Afghanistan. Under agreement as per being Russian weapons biggest buyer, India is assured that the same weapons that are sold to it cannot be sold to Pakistan. Yet, this kind of proximity of Russia to an economic corridor which runs right through Gilgit Baltistan is not something to be dismissed lightly. Immediately after their joint military exercise, Pakistan offered Russia the use of Gwadar, its new Chinese-built port on the Gulf (which from Tsarist times, Russia has always wanted), which is close to Iran and opposite Oman. When the Soviets invaded Afghanistan, Pakistan was convinced that the Russian dream was to have a base on Pakistan’s Gulf coastline. Ironically, Pakistan is now offering the same facility. However, Gwadar port is not yet fully operational and is surrounded by insurgencies in Afghanistan and Balochistan . Its capacity is being enhanced by a Chinese-built network of roads that will eventually connect to the Chinese border in northern Pakistan.  The use of the port for docking foreign ships is still far  (Chinese navy already has been given all landing spots), and its not known if Russian navy vessels will be permitted there.

Russia, Pakistan and China want Taliban to be used as a force to counter the Islamic State and its undeterred influence.

Taliban is a result of the CIA armed mujahideen nurtured by ISI which wrecked havoc in Afghanistan during its five year rule and preceding violence with various factions, notably the northern alliance. Its only after 9/11 that the Americans stopped their support to the Taliban via Pakistan and ended their reign. But even today, the writ of the USA propped Afghan government does not run very far beyond Kabul. Pakistan Army knows that Taliban is its Trojan horse and can very well rule Afghanistan once again.

Islamic state is the erstwhile Iraqi Al Qaeda, which has been strengthened by many personnel of the former Iraqi army , as well as aid & arms from Saudi Arabia, Turkey, Qatar (all of them deny it) and of course, CIA. It today rules an area in Syria and Iraq combined which is bigger than Belgium. It earns millions of dollars via oil and gas sale, and is even in possession of heavy artillery and a few fighter jets. Unlike Taliban, which is completely comprised of Pashtuns, Islamic State has recruited Sunnis from all over the world, from Britian to India and Pakistan. And it makes Taliban look like Elmer Fudd when it comes to violence and cruelty.

Nations have no permanent friends or allies, they have only permanent national interests. Diplomacy is a dynamic affair, and there is never romance between any two nations. It is no secret that last PM and current PM of India are much more interested in Washington than they are in Moscow. India now is spending more money buying US weapons than Russian ones (and has further diversified its basket by adding Israel, Sweden, France), and similar is the tale of trade. Pakistan was in the western camp during the cold war,  had airbases from which CIA spy planes flew to survey Soviet territory (one of them was shot down in 1960, leading to a tense standoff, captured by the film Bridge of Spies) and during the Soviet Afghan war, was the main conduit to route funds and weapons to the mujahideen that fought the Soviets. A lot of Pakistanis also fought in the Chechen wars and Pakistan’s ideological support to them is no secret. Inspite of that Russia is warming towards Pakistan as it wants to keep the Afghan disturbances from spreading to central Asia and mar its influence there. Pakistan faces increasing isolation in the region – led by India, Afghanistan and Iran, and criticised by the US and NATO countries for continuing to aid Taliban. At present, it is solely dependent on Chinese economic and political support on this front. Pakistan is desperately keen to rebuild relations with Russia, as  warmer ties with Moscow will counter US and western pressure and will give it another powerful ally besides China.

India has a major stake in Afghanistan it must not allow Taliban to walk over it. Besides Haqqani network, Gulbuddin Hekmatyar  has returned in Afghanistan after an exile of 20 years. This is bad news for India, which has the added work of  convincing the US of having no truce with Taliban factions as well as  the Haqqani & Hekmatyar network. Indian installations in Afghanistan are a constant target for ISI and Taliban. At the same time in conjunction with Iran and Afghanistan India must revive Northern Alliance of yesteryears composed of Tajik, Uzbek and Hazara tribes of Afghanistan, which form 48% of its population in the north Afghanistan. These ethnicities coming together can build a platform for demanding their own share in governing Afghanistan. If this happens, the tables can turn on Pakistan as the semi autonomous FATA and Khyber Pakhtunkhwa can be a hot ground for the demand of the demand of Pakhtoonistan, and Pakistan stands to lose a lot of ground. Its already lost more than 10000 personnel in the Waziristan war (real figures can be way higher) and there is no end to that in sight.  It can’t afford another separatist movement.  India must also work towards forming a network of anti Pakistan pashtun warlords to make  the already burdened Pakistani army divert their personnel on the eastern border to be engaged in attrition war in Afghan Pak border areas.

India must also remember that like the last thousand years, its has to do its fighting alone against global jihad. It cannot rely on assured support of any old friend always (like during 1962 Indo China war or  Kargil conflict of 1999) or new found allies (inspite of dozens of joint military exercises every year, trade ties, US foreign policy will always be bad for India). To its credit, its position is much stronger than it was in the 1990s while at the same time, Pakistan is a much weaker state whose  utility for the NATO block is diminishing every day.

Will 2017 bring a change in the world’s attitude towards Islamic Terrorism?