Kosovo was once the heart of Serbia, it is now a den of Islamism 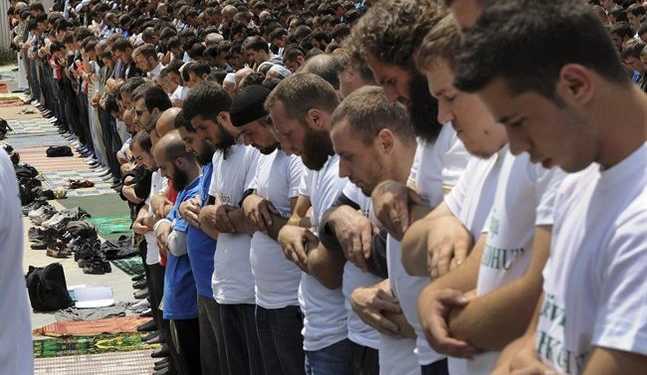 It is a common joke among Foreign Affairs enthusiast that there are two kinds of international crises- the Important and the Urgent. No one ever cares about the Important- until the crows come to roost and the nukes are being loaded. Then the Important becomes the Urgent.

Last month, barely two weeks ago- the Serbian government sent a train covered with the words ‘Kosovo is Serbia’ in multiple languages, barrelling into the Kosovar city of Mitrovica.
Though the train was stopped well before it entered the disputed territory, the ramifications were instantaneous. Albania and Croatia requested NATO to ‘revise’ its ‘peacekeeping plans’ in Kosovo. Random attacks on civilians have been reported in several cities in Kosovo and Serbia. Upon news of possible organized violence- such as the events in 2004 where nearly 30 Serbians were killed by Kosovar Albanians- upon Kosovo’s Serbians, the Serbian president, Tomislav Nikolic, declared that he and his sons would personally take up arms.
It seems the Balkans are no longer just merely ‘Important’.

Readers, if they follow political news regularly, might have noticed the name ‘Kosovo’ earlier. The body- for the term ‘State’ might be premature for Kosovo as yet- appears semi-regularly in public releases by India’s intellectuals.

Some time ago, Kamal Mitra Chenoy- a JNU Professor and known intellectual as can be seen from this report– declared: – ‘the international community’s responsibility…have taken positions on East Timor (and) Kosovo. Kashmir can’t be ignored simply because it’s part of the largest democracy in the world. We want to place the truth (that) the state and federal governments are trying to suppress the people’s movement… because they don’t want an independent Kashmir.’ Less than two years ago, the Naga Scholar’s Association (NSA), based at the (in) famous JNU released a statement prior to the beginning of their Convention: ‘In the recent past, the morale of such struggles for their right to Self-Determination has been boosted through the independence of East Timor in 2002 and Kosovo in 2008.’ Lots of Professors in JNU have either worked in Kosovo- or persons associated with the land.

Readers will note here- Kosovo is a tiny body of less than two million people.
Then why so much focus on tiny Kosovo? Why not on Kurdistan where the Kurdis fight everyday against the Turks, the Arabs, and the Iranians to escape being wiped out of existence. Why not Western Sahara where the Moroccans slowly wipe out the native population? Why not Baluchistan or Papua New Guinea? Why not Tibet- the largest nation under occupation or the Uighurs or the peoples of Inner Mongolia or even Hong Kong? The answer is simple. It is natural for Empires to loathe each other.

There is no point in targeting Pakistan for NATO. It is a puppet state controlled by the Arabs and China.

There is no point in targeting Morocco for NATO. It is an utter non-entity with as much say in the World as a wet paper bag.

There is no point in targeting China. The Chinese communists are not traitors, but Nationalists- and they will die before betraying their Han Chinese State.

India is targeted- again and again and again- because of its ‘Softness’, its tolerance for secessionist traitors masquerading under the guise of intellectualism, its educated classes’ unending desire to pass off as ‘Westernized’ by licking the shoes of every nut job trying to copy a vampire, and its intellectuals’ mad drive to reject every trace of their own civilizational existence. Once upon a time- before Putin- Russia was the same and couldn’t defend its civilizational client States such as Yugoslavia.

The advantages for NATO of Balkanizing Large States are many.

Balkanization of large States- ‘Empires’- not only creates smaller, more manageable Client States, it also prevents the growth of large Powers that can challenge the status quo. Both the Western Right and Left share this ideology.

Smaller States- even of opposing ideologies such as Islamism- can be easily controlled via bribes and threats in the way larger States cannot be. Readers can easily note how the USA finds controlling nations like Thailand- still nominally steadfast to its pagan roots- and South Korea- rapidly Christianizing and Westernizing- easier than controlling Brazil though the latter are far closer to it in culture

Creating small Client States allows for easy exploitation of resources and markets. A proud civilization superstructure- such as the Russian Orthodox Church or the Japanese Imperial Throne- can prevent this, but that can only happen when the peoples of the land are united under the banner of Empire.

That was when Kosovo was born.

Kosovo was once the heart of Serbia; it is where the (in) famous Battle of Kosovo Polje was fought where the Serbians were finally defeated and conquered by the Turks under Murad I.

It houses not only the remains of Serbia’s last pre-muslim ruler Lazar, but also the capital of the Serbian Empire- Prizen- and the original grave of their greatest ruler, Emperor Dusan the Great. Even as late as 1914- after five centuries, Kosovo was majority Serb with constant rebellions and the local barons managing to preserve as much of Serbia’s ancient heritage and art and architecture as possible.

That was before Communism and Liberalism came in.

The proportion of Albanian Muslims in Kosovo doubled in proportion within a mere 30 years of Communist rule. The first rebellions- ‘Self Determination’- movements started by the 80s. The process was exacerbated by well-to-do Serbs fleeing the increasing violence in Kosovo- such as the 1981 riots which left dozens, even hundreds, dead. War- funded by CIA and Saudi agents in the aftermath of the Soviet Union’s breakup- started in 1992.
The Serbs and the Montenegrins and other Yugoslavian groups won- but that was only the cue for more Islamists to flood in, more Albanian mafia gangs, and more NATO interference. When the War started again, cries of genocide went up. Then President of Yugoslavia, Slobodan Milosevic, was accused of genocide, trying to murder the local Muslims.

And NATO moved in- despite the UN’s and the Security Council’s protests.

In course of the war- NATO conducted an unprecedented 19,484 Airstrikes within Serbia- as much as over 250 per day. This is more than the figure from the decade long wars in both the Afghanistan and the Iraq wars combined. In contrast, NATO has conducted only a mere 2,900 odd airstrikes against the Islamic State, and Al Qaeda and its affiliates over a much longer period of operation. In less than 3 months, NATO dropped over 20,000 tons of bombs on Yugoslavia- targeting both military and civilian sites with impunity.

Even embassies of rival States were bombed- for example, the Chinese embassy. According to several sources- such as Parenti’s To Kill a Nation, NATO used Cluster bombs, radioactive projectiles- such as depleted Uranium shells, and other weapons it itself purports to ban.
Kosovo was born- and as we have seen where Liberalism flourishes, Islamism is sure to follow.

Under Yugoslavia’s Nationalistic Communism, religious extremism- both from Christians and Muslims- was kept under control. In contrast, Liberal Democracy has brought with it violence and extremism.

In the past 5 years, more than 300 Kosovars- including women- have left Kosovo to join ISIS- though the numbers are supposed to be far higher. More than 200 people have been arrested for terrorist activities and a further 127 arrested. Over 5000 people are suspected to be tied to radical Islamic groups.

Women’s Rights are on the decline- clearly a triumph of Feminism. Reports state: ‘…one sees more and more women and girls wearing headscarves in the capital Pristina and not just rural areas. Even fully covered women are no longer a rare sight…’

This has gone hand-in-hand with other events– Gulf States pouring money into the land, destruction of important historical sites related to the Christian and Pagan past of the region, and trade in organs of prisoners. Kosovo has become a centre of Sex Slave Trade in Europe supplying Balkan girls to markets as far as Iran and Morocco.

The nonsensical pretext of ‘Self Determination’ upon which Kosovo was built- much like the ridiculous Kashmiriyat our local intellectuals constantly bemoan as they spit on murdered Kashmiri Hindus and martyred security personnel- is collapsing quickly. According to the Kosovar Institute for Policy Research and Development’s Lulzim Peci, only 57% of Kosovar Albanians ‘feel Albanian’. 32% described themselves as Muslim first.

Do mark the absence of the term ‘Kosovar’ anywhere.

On the other hand- Liberals and their Arab masters have been working hard to ensure that the very memory of a Christian Serbian Kosovo is forgotten. Two years, Obama played the part- all but denying the existence of a Serbian Kosovo. Here, some Readers would accuse us of quoting an ‘unreliable’ Right-wing site- so to them, we present the words of the noted Dr Daniel McAdams, an associate of Ron Paul himself, where he decries ‘Obama’s War on History’.

The Liberal Establishment’s War on History extends to more recent events- as no Mainstream media outlets reported the ICTY’s exoneration of the late Milosevic. Instead, the former President of Yugoslavia- elected from among 20 parties- was branded a ‘tyrant’ by shadowy NGOs such as the Coalition for International Justice, staffed by US government officials and eminent intellectuals from large colleges.

This is War- not merely on sovereign States, but upon Reality itself.

The existence of entire Nations, people is being denied outright- and wiped out piecemeal. Ancient statues are being destroyed, heroes and kings are being wiped out of history, Islamic tyrants praised as paragons of virtue, demographic warfare openly encouraged. Kosovo- once the heart of the Serbian Empire- barely has 5% of its population as Serbian. Serbs have been wiped out of existence not only in Kosovo- but also in Krajina and other territories. Even now- the vile Liberal-Islamist net is extending in Europe with the Liberal politicians cultivating ghetto voting blocks of Refugees and pushing Islamist principles into yet-unaligned States such as Macedonia; recently the self-proclaimed president of Kosovo, Hashim Thaci, has called on ethnic Albanians in Macedonia to “take the destiny of their rights into their own hands.”

We live in a World where Up is Down, and Right is Left.

We live in a World where Two and Two make Five.

We live in a World where the livers and kidneys of children are being torn out and sold to old rich degenerates in the West, where young girls are being kidnapped and raped in Arab harems.

We live in a World where all this is happening- and the Media and Intellectuals smile their oily smiles and stuff their mouths with Arab gold and Hindu blood.

We live in a World where Kosovo exists. And one where soon Mughalistan might as well.
Be loyal! Be brave! Be vigilant!

The Chinese Dragon is about to unleash war of waters, India is the immediate target