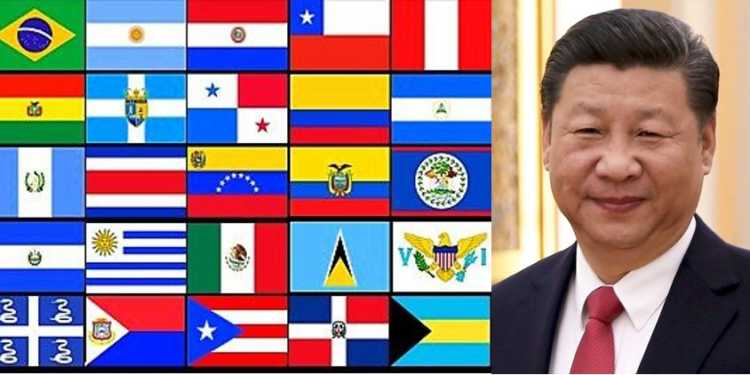 The rise of China has broken the world from the shackles of the uni-polar world as it’s the only contender that is capable of challenging United States of America. In 2016, when the whole world had its eye on United States president elect Donald Trump whose unforeseeable victory gave constipation to biased mainstream media; Xi Jinping, president of the world’s second-largest economy was busy in Latin America. It was his third trip there since 2013 to finalize a number of trade deals.

China has undergone one of the most remarkable transformations in history after the Cultural Revolution. The Latin America’s economy was stagnated because of the debt crisis and Washington Consensus policies in the 1980s but China rode the wave of three decades of sustained robust economic growth (GDP 8-10 per cent). It helped China to emerge as the world’s second largest economy and second largest global exporter. Apart from establishing itself on global level it has pulled close to 400 million of its citizens out of poverty and improved its infrastructure in unprecedented fashion.

The dragon’s rise is only one part of a broader shift towards a world in which center of gravity has shifted east as Emerging Economies are gaining relevance in the new world order. Latin American countries, with their rich strategic natural resources (oil, minerals and metals) are infested by structural problems of poverty (close to 40 per cent still live on less than US$ 2 a day), unemployment, stunted infrastructure, etc. They perceive China as a messiah who would rescue them prom poverty just like Moses rescued slaves from Egypt. Latin Americans are avidly seeking viable alternatives to the Washington Consensus framework of neo-liberal economic policies which has failed to give desired results in the region.

Over the past decade mutual trade between China and Latin America has skyrocketed on account of China’s voracious demand for new sources of strategic natural resources, which Latin America has in abundance ( oil, minerals and metals) is the reason China is strengthening its feet there. The resources fuel China’s robustly growing economy .Of 81 per cent of Chile’s exports to China, copper is a product which is susceptible to unpredictable price swings which is undesirable for importer; same is the case with Argentina’s soya bean industry (74 per cent of the South American country’s exports are for China alone). To mitigate the effects of changes in commodity prices, Chile and other resource countries have begun utilizing profits resulting from such exports towards welfare initiatives in education and job and skills training.

Both China and Latin American countries have undertaken steps to improve market access for either in each other’s marketplace.

Chile was the first Latin American country to sign a Free Trade Agreement with China back in 2006 followed by Peru and Costa Rica in 2010 and 2011, respectively. Chinese brands in consumer appliances, telecommunications and automobile industries have been able to successfully compete in Latin American markets due to their cost competitiveness.

According to the United Nations Economic Commission for Latin America (ECLAC), China’s foreign direct investment in Latin America reached US$ 15.3 billion in 2010 and US$ 22.7 billion in 2011. Though operating from a relatively small base, Chinese investments in Latin America are growing exponentially, having touched US$ 15.3 billion in 2010 and US$ 22.7 billion in 2011. As Latin American expectations are changing, so too is the pattern of Chinese investment. In 2010-13, 90% of it went to natural resources. Recent investments have branched out. In September 2016, China’s State Grid bought a 23% stake in CPFL, a Brazilian energy utility, for $1.8bn. In 2015 Bank of Communications bought 80% of BBM, a Brazilian lender for $174m. Fosun, an investment company bought a controlling stake in Rio Bravo, an asset manager in Brazil last year. However, concerns haven’t been far behind, regarding Chinese business practices and their disastrous consequences on local industry and domestic sectors in Latin American countries, particularly clothing and textiles.

Although Chinese are nowhere close to displacing the United States which is a key provider of foreign aid to Latin America (US$ 40 billion received in 2010). Besides being a critical source of foreign exchange for multiple countries in the region the Yankees should not be complacent about their influence.

Most of the trade deals have been with left-wing governments of Latin America, which initially saw China as an anti-imperialist baton holder. Chinese loans to the socialist nations over the past decade have cemented that expectation. They went mainly to Venezuela, Brazil, Argentina and Ecuador that had left-leaning governments for most of the period. Now China worries that Venezuela which is nearly bankrupt and on a self-destructive populism may not repay its debts. So it wants to improve its relations with business-friendly governments in Argentina and Brazil.

Latin America which is the backyard of USA is now the new playground of Chinese. In Obama administration public position of the United States Government was that it does not see a geopolitical threat arising from China’s growing influence in Latin America. The Yankees have neglected Chinese surge in the region for too long and they have forgotten even Muhammad Ali, the greatest boxer ever was also not invincible. The labyrinthine complexities of eclectic geopolitics should not prevent Americans from keeping backyard check before barging into other’s homes.