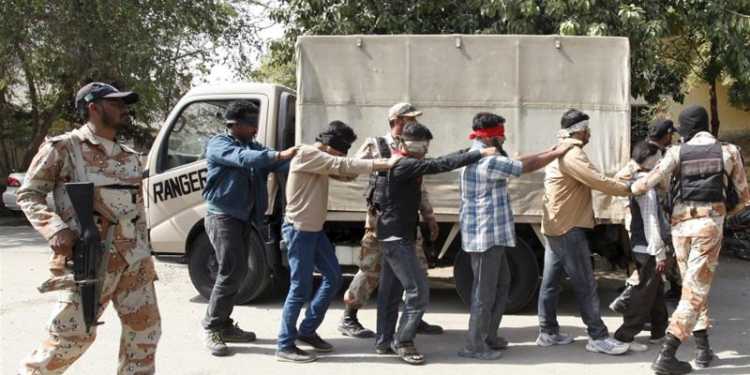 Last month, the farce that is the Pakistani Democracy belched out yet another sign of its complete impotence when Pakistani President Mamnoon Hussain signed the Pakistan Army Act 2017 and the 28th Constitutional Amendment Bill, passed by the Pakistani Parliament earlier, extending the Military’s right to prosecute civilians for another two years.

These Military Courts were first setup in January 2015, in the wake of a Taliban attack on a Peshawar School which left over 150 people, mostly students, dead.

Public outcry and the sad state of Pakistan’s collapsing judicial system had pressured the government into allowing Military Courts to try ‘hardened’ terrorists. The reasoning also went that while Civilian judges might be at risk from fatwas and physical attacks by Islamic bodies and Jihadis, the Military would be able to guarantee quick, secure, and effective persecution of any Islamists captured. These Courts are run by high-ranking Military Officers, and have played an important part in Pakistan’s anti-terrorist operations over the past two years. They have presided over 275 cases till now, sentencing over 160 ‘terrorists’ to death and over a hundred more to life sentences. A total of Eleven Courts are known- three each in Punjab and Khyber Pakhtunkhwa, two in Sindh, and one in Baluchistan; however a total count has never been officially confirmed.

Ostensibly- such Military Courts would be a welcome sight, for the Pakistani judicial system is as bureaucratic, corrupt, inefficient, and soft-handed on Islamic terrorism as its counterpart in another country (which we can’t name for being arrested for the ludicrous Orwellian crime called ‘Contempt of Court’).

However, in case of Pakistan, such optimism would be misplaced.

First, Readers must understand what the idea of ‘Military Courts’ entails. In the entire Indian Subcontinent, Pakistan is the only country which allows the Military to prosecute Civilians. While most militaries do maintain courts to try their own personnel- partly because they operate in remote territories and in secrecy, Pakistan’s 21st Amendment allow it to interfere in Civilian jurisprudence. These Courts are completely opaque in their working; no one knows who the Convicts are, no one knows what are the Charges levied, no one knows what Defence has been presented- or if a Defence has even been allowed. There is no guarantee of a detailed written judgement at the conclusion of the Trial, neither is the Reasoning behind the Verdict or the Legal background established in any form. The Convict’s associates- including their family members- are rarely informed of the Verdict. In many cases, the Accused simply disappear into thin air.

If Readers consult a dictionary, they will find that such a state of affairs is what constitutes a ‘Kangaroo Court’.

The few suicidal Pakistanis who dare go against the Pakistani Army have criticized the move, especially since the Inter-Services Public Relations (ISPR), the Pakistani Military’s Publicity Wing has repeatedly stressed on the coming end of such Military Courts. However, Pakistani political parties have been, by and large, subdued and even supportive of this Tyrannical practice.

The Decision to revive Military Courts were taken at a Meeting chaired by Pakistani Prime Minister Nawaz Sharif himself, which featured Top Pakistani Military brass, Pakistani Army Chief General Qamar Javed Bajwa, and ISI Director General Naveed Mukhtar. The Opposition- such as the PPP, PTI, and Jamaat- have been subdued, meekly voicing concerns but repeatedly emphasizing on the “need for judicial reforms.”

Readers who might be consoling themselves at this news by having hopes of effective action against terrorists are requested not to indulge in such juvenile fantasies.

The Revival of Military Courts is just the latest step in a massive Political and PR expansion by the Pakistani Military in recent days, primarily built on the back of genocidal campaigns against the Baluchis, Waziris, Baltis, and other ethnic groups.

A personality cult, centered on former Pakistani general Raheel Sharif, had risen with posters of him appearing regularly in billboards across major cities. His appointment as the leader of a 39-member Saudi Military Alliance called the ‘Islamic Military Alliance to fight Terrorism’ has led to further questions, considering the explicitly anti-Shia, anti-Kurdish vibes being presented by the Organization. Propaganda websites- often featuring images seemingly sourced from Military agencies- have cropped up in Pakistan by the dozen. And the Pakistani military itself is now funding patriotic Rock songs to boost support among the Pakistani Youth.

Even more interestingly, this PR drive by the Pakistani military has come simultaneously alongside a sustained assault on the image of the Indian Armed Forces by several Indian Mainstream Media channels. False accusations that the Indian military murders its detractors- peddled with the aid of fake images, journalists hounding jawans to suicide by publishing faked interviews, young girls chanting ‘Aman ki Asha’ on Indian channels, questions on the Military’s handling of the Kashmiri problem- all have figured prominently in the Indian media in recent months. Readers are requested to connect the dots themselves.

With weaker foes, the Pakistani Military has taken a more direct approach.

In a recent report, Saeed Baloch in the Balochwarna News writes: ‘Hundreds of Baloch political leaders and activists have been assassinated in different parts of Baluchistan by Pakistani security forces.  Since 2001, more than 23,000 Baloch political activists, journalists, writers, and children have gone missing, “illegally abducted” by the Pakistani state security forces and the victims of enforced disappearances are being “tortured and executed” in custody, more than 5,000 Baluch have been dumped in various parts of Baluchistan by Pakistani state security forces. The number does not include those who were killed during the military attack and air strikes on their homes by Pakistan Air Force fighter jets and cobra helicopters, the Voice for Baloch Missing Persons (VBMP) has registered 667 cases of enforced disappearance and 116 of recovered mutilated bodies in 2016 alone.’

The genocide of Shias in Gilgit and Baltistan has been even starker.

In the past five years, the Pakistani Military has engaged in systematic genocide of the Shia populace in this occupied territory, with thousands being murdered and the area resettled with Punjabi Muslims. The Institute for Gilgit Baltistan Studies reported about the rise of the persecution from 2012: ‘…first on February 28 and then on April 3, terrorists attacked buses loaded with passengers of Gilgit-Baltistan and slaughtered more than 100 Shias. The unfortunate incidents occurred in broad daylight on the Karakoram Highway (KKH) which is dotted with police and military check posts. Eyewitnesses claim that police provided weapons to the assailants, who numbered in thousands. Following the Shia massacre, an indefinite curfew was imposed in Gilgit-Baltistan causing food and medicine shortages. As of now, the region is cut off from the rest of the world as traffic on KKH, the sole road linking Gilgit-Baltistan with Pakistan, remains unsafe and disrupted, and air travel is cost prohibitive for the vast majority.‘

The motivating factor in Gilgit Baltistan, as in Baluchistan, is the construction of the CPEC with Chinese Assistance- which is, essentially, nothing more than a great Chinese plot to turn Pakistan into a financially-dependent Puppet State- with the complicity of the Pakistani military.

For Chinese funding and bribes will help the Pakistani military the most. The organization is a fiscally autonomous, massively wealthy body- in many ways, merely an ally to the Pakistani government rather than a Government body in itself. Dr Ayesha Siddiqa- writer of the book Military Inc- estimates the Pakistani’s military net worth- in 2007- to have been an incredible $30 billion. The Pakistani army owns 12% of all land- including the most fertile parts in East Punjab. Three Military foundations control over 100 separate commercial entities- and only 9 have ever published even partial financial statements in public. Up to one third of all heavy manufacturing and 7 per cent of private assets are reckoned to be in army hands. As for prime real estate, a major-general can expect to receive on retirement a present of 240 acres of prime farmland, worth on average £550,000, as well an urban real estate plot valued at £700,000. Over two hundred Pakistani Military officials are believed to be billionaires.

The one strength this massive, bloated, genocidal organization has ever lacked has been an independent judicial wing of its own- and now it has obtained it.

The Pakistani military has built itself a throne of bayonets, with independent financial strength, a working propaganda branch that reaches within and across borders, vast landholdings, a free license to wipe out entire peoples out of existence, alliance with bloodthirsty Islamist groups, and now- a constitutionally-sanctioned Kangaroo court system of its own. Advocates of ‘Chaman Charlie ka Tamasha’ never had it better.