There is a Right Wing wave across the world, Where do France’s loyalties lie? 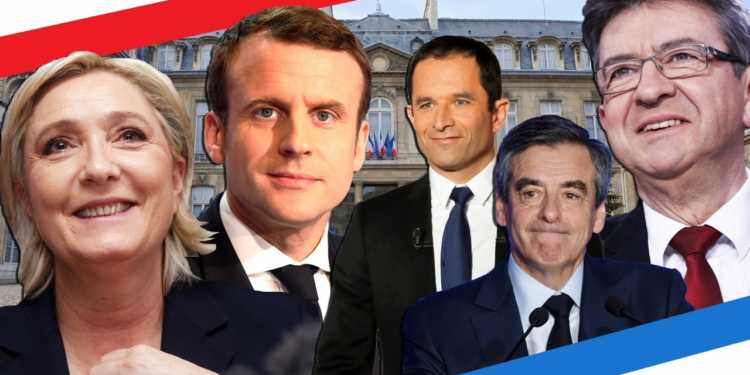 The countdown to the first round of voting in the race for the French Presidency has entered its final moments, tomorrow France goes to vote in the first round of presidential elections. The world will be watching to see just how far the right wing wave has traveled.

Centrist leader Emmanuel Macron is locked in a duel with the far-right leader Marine Le Pen for the first round of voting as per exit polls. But unlike most countries France follows two round electoral system. Candidates are pitted against each other twice in the election. Just because a candidate won in the first round, it doesn’t mean that they’re going to win the presidency.

French politics has historically been dominated by parties of the left and Centre, but this model could be shattered this elections, thanks to the rapid rise of Far Right candidate Marie Le Pen.

Let us look at all the prominent candidates involved in the French election.

Marie le Penn (far right): Her father, Jean-Marie, was a racist who showed more interest in talking nonsense than leading the Front National (FN) into power. But Marine Le Pen, a former lawyer steered the far-right group in a decidedly different direction. She removed her father from the party and softened the party’s toxic image, and she is now being widely touted as a strong contender for the French presidency. Several polls have put Ms. Le Pen in the lead; the “Trump effect” could see millions of undecided voters pick her over Mr. Fillon, the mainstream right-winger. Unlike Trump who didn’t have the support of millennial, most of Le Penn support comes from the millennial.

Emmanuel Macron(Centre) :Emmanuel Macron, an ex-banker who has never held elected office, has gone from rank outsider to presidential frontrunner. He is not an MP and has never stood for election before but his political rise has been meteoric and is polling to tie with Marine Le Pen in round one and is widely expected to win round 2. He is pro-European and pro-business, critics say he talks in empty slogans. He is married to a divorcee 20 year his senior, insists he is “neither of the Left or the Right” but “for France. While France’s business community loves him, his policies have strong opposition from leaders in the opposition.

Francois Fillon (Centre right) :When Mr. Francois Fillon won his centre-right party’s nomination for the presidency he immediately became the favorite. But his campaign was plunged into chaos after a French newspaper accused him of paying his wife, Penelope Fillon, just shy of a million euros to do a job that never existed. He is also accused of transferring public funds to his two children. He complained he was the victim of a “political assassination” .Despite the inquiry, he is not far behind the two front-runners in the polls and his campaign team remains confident.

Jean-Luc Melenchon (far left): Jean-Luc Melenchon is calling for a nonviolent citizen’s revolution and for the constitution to be torn up and rewritten. Mélenchon has seen support surge since stealing the show in the first televised presidential debate and impressed the public with his hi-tech use of holograms, projecting his image to rallies in six cities simultaneously. He is proposing 100 per cent taxation for anyone earning more than €33,000 a month while raising the monthly minimum wage to €1,300. He sees himself pro poor and anti-capitalist politician. Backed by France’s Communists, he says the means of production, trade and consumption must be changed, and cites climate change as one of his concerns.

After the surprise of Britain’s Brexit referendum and the election of Donald Trump as US president, just what kind of politics France embraces will be of huge interest to many around the world. One just has to wait till May 7th 2017.

Keep following TFI for more in depth coverage of round 2 French elections.

After Syria and Afghanistan, America is very likely to hit another nation soon