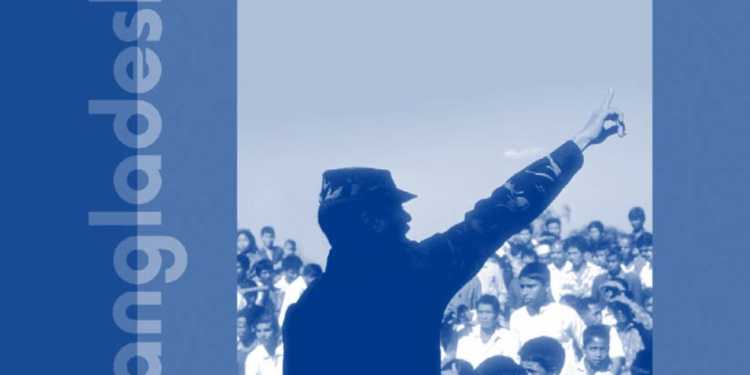 Few days back, the Islamist group Harakah al-Yakin announced the start of a new wave of terrorist attacks upon the people of Myanmar. The Harakah-al-Yakin or the ‘Faith movement’ is simply one of the dozens of Islamist organization based in the forested, mountainous border between Bangladesh and Myanmar, fighting for the ‘liberation’ of the Arakan province from Myanma control, the creation of a new Islamist State, and- of course- the genocide of every Myanma man and the rape of every Myanma woman. All of this while the International and Indian liberal media cries itself hoarse on the ‘human rights violations’ committed by the Myanma government in its attempts to keep the peace.

Be that as may- we should not be surprised at either the actions of the bleeding heart Islamo-liberals or the fact that Saudi preachers and Saudi money have grown ever more common in the area in recent years or that the Media has been consistently ignoring the plight of the native Myanma in favour of the vicious Bengali Islamists.

All of this has happened earlier.

From the Classical Era when the Gupta Emperors of Pataliputra and Ujjain forged the Continent into the pinnacle of Human achievement and learning, the North-East has been a major centre of Arya Dharma and culture. Several among these Arya States on the border have persisted to this day- such as the Chakma, named after the Sanskrit ‘Shakti-manata’ for their valour in Warfare and Administration and once allies of the Burmese Empire, or the Meitei, rulers of the Manipuri Empire for millennia. These States remained free and independent long after the surrounding Bengali and Arakanese territories fell to the Muslim invaders. For centuries, they defended themselves as the surrounding Bengali communities fell from Dharma, holding true to their Arya customs and ways- ultimately forcing the Mughals, at the time beset by Shivaji Maharaja’s wars in the Mainland, to sue for peace. Even the British invaders were unable to destroy these kingdoms- contenting themselves with merely tribute and alliance.

In 1947, most of these hill states were betrayed not only by the British, but also by the Congress who allowed extensive territories populated by non-Muslims to go into the hands of the East Pakistanis. As a result, the entire Chittagong Hill Tract with 98% non-Muslim population fell into the hands of the ravenous Islamist hordes of Bengal. And the horror started.

The construction of large dams such as Kaptai complex were meant to dispossess the hill people of their lands, rather than Bengali Muslims. Few of the lakhs displaced were ever resettled.

Vast drug trafficking rings were started by Islamists to ensnare the non-Muslim hill people into circles of poverty and disease. This is a model that continues to this day, often in association with Chinese and Thai gangs in the East and the Afghan mujahedeen in the West.

The trafficking of hill women became a major industry– and persists to this day, stretching from Dhaka to the Gulf where the ‘exotic’ looks of hill women are in heavy demand from Arab brothels and abusers. Needless to say- feminists and the media remains unconcerned.
Nevertheless, these hill people had one great stroke of luck.

The Punjabi-dominated Pakistanis considered Bengali Muslims to be inferior and actively oppressed them throughout the 50s and 60s. Exploitation was limited by the fact that the Pakistani military was reluctant to allow Islamist Bengalis to acquire too much power by exploiting the hill states. Nevertheless- atrocities were common and arose each year.
But then- the Bengalis of East Pakistan finally achieved what they’d long hoped for- an Islamist tyranny of their own called Bangladesh.

Since 1971, the story of the non-Muslim hill people of the Chittagong and Arakan area can be summed up in one word: HELL.

Since 1971, Dhaka’s Islamists have been fighting a long covert war to destroy every trace of non-Bengali, non-Islamic culture across their Islamist Bangladesh. Since 1971, the Bengali Islamists have been actively collaborating with their former Pakistani foes, the Western heroes of ‘Human Rights’, the Chinese Communists, and not least- the valiant Liberals of India to essentially wipe out cultures that have existed since before the rise of Japan or England.

The process of doing so is Three-fold, and is being outlined here in the English-speaking media for the first time in history:-

Civilian: The Bangladeshi government actively encourages the migration of Bengali Muslims into the hill tracts of Chittagong, providing each invader- apologies, ‘settlers’– with 500 Taka and 85 kilograms rice. The construction of mosques is subsidized and often paid by Arab money while the temples and monasteries of the native hill people is destroyed. Organized riots are commonplace with bands of Bengali Islamists running amok regularly through the towns and villages, kidnapping girls and raping women.

As a result, the non-Muslim population is in freefall. From 98% during Indian independence and 93% in 1971, less than 40% of the population in the former CHT remains non-Muslim, non-Bengali. And in every locality where Bengali Islamists even gain a 30% population base, ALL elections are invariably won by Islamist candidates with the help of consolidated voting blocs. The situation is so grim that in 2015, ALL local candidates lost to Bengali Islamist candidates in the Municipality elections. In the 2016 Union Parishad Chairman elections, not even one hill person was elected.

Military: The Bangladeshi Islamist tyranny is ably aided in its atrocities by the Bengali military. It has become mandatory for the hill people to pay ‘protection tax’ to the Military to even survive. Even so, kidnapping of hill women and girls by the Bengali military is so common that the population itself is in freefall. Of course- not one of the great Feminists of either India or abroad has ever paid any attention to this crisis. Military permission has also become compulsory in order to build a home, celebrate a festival, travel between towns, or even to gather in large groups across the length and breadth of the hill areas of Chittagong.

Intellectual/ Academic: The brutality of the Islamist Bengalis has been matched only by the hypocrisy of the English-speaking intellectuals of India and Bangladesh. While Indians wax eloquent on the farcical ‘Liberal Islamic Democracy’ of Bangladesh headed by a woman, massacres continue unabated across the country. Any protest by right-thinking Indian is drowned in a spate of whataboutery and liberal double-speak. We will, therefore, handle their arguments one after the other.

Liberals protest that Indians should have no concern with the internal affairs of Bangladesh. This argument loses ALL its potency when one remember that these are the very same Liberals who quote Western studies at every point and coo over foreign butchers like Obama when they have the gall to lecture India. These are the very same Liberals who call all Indian men ‘potential rapists’ and froth at the mouth on the Indian ‘occupation’ of the Islamist-ridden hellhole called Kashmir.

Liberals protest that India cannot even guarantee land and resources to its own people and so must not interfere in the ‘development’ of Bangladesh. This is exceedingly rich, coming from a host of over-educated professional whiners who cry their guts out every time a new nuclear plant is constructed or a new government scheme is launched. Also- the question deals with the genocide of the ethnic hill peoples of Bangladesh. Even China ‘develops’ the lands it conquers- after wiping out the local peoples and resettling the area with Han Chinese! India provides some of the most extensive land rights to local people that the World has seen. And why even care for the anti-imperialist opinions of Westerners who have built their societies on the blood of brown and black and yellow folk?

Liberals protest that India’s dealing in its own hill states in the North-East hasn’t been the best and so interference in Bangladesh would be hypocrisy. This is, again, nonsense of the highest order. The Crises in the Indian North-East stem invariably from two factors- the spread of Christian fanaticism, a plague that goes unspoken in the so-called polite societies of India- and Administrative bungling thanks to Socialism.

It is no surprise that the insurgency in Nagaland arose from the few Christian areas in the state back in the 50s. Mizoram saw the expulsion of entire Hindu-Buddhist Arya communities such as the Chakmas and Brus. Even the entire career of political figures such as Kiren Rijiju himself has been built in the wake of the Christianization- and thus, insurgency- of people in the Arunachal.

If Peace reigns in India’s North-East, it is because of Arya Dharma- be it based on the teachings of the Vedas or the Shakyamuni or the rest of the great Arya schools. Even ‘peaceful’ Mizoram- built on war and Christianization and cultural genocide (to the extent that Mizos don’t even remember their own history before the coming of missionaries in the late 1800s while the neighbouring Manipuris, across a single hill ridge- maintain millennia-old records) and the expulsion of Brus and other groups- had a temple in the middle of Aizawl bombed as late as 2013.

Nonetheless, there is one overarching truth.

No amount of whataboutery or Liberal whining or puerile accusations of double-speak can hide the simple fact that the Islamist Bengali population has been carrying out a massive genocidal campaign to decimate the Jumma, Chakma, and other hill people of the land.

It is imperative that Indians- of all walks of life- gather in protest of these distant Arya kin, these people so much like ourselves, being persecuted by a Bengali Islamist administration and ignored by the rest of the Liberal-dominated World.

We owe them our support, as we owe our support to the Copts in Egypt or the Tibetans still under Han domination or the Chinese in Malaysia or the Buddhists in the Southern provinces of Thailand or the Animists suffering from Christian domination in Africa or even the much-maligned European neo-pagans. Despite our differences, despite the gulfs of race or language or caste or colour, we are all one people, in one world, bound by Dharma and a mutual goodwill, beset by the same ills and weaknesses that aim to tear all Aryas apart.

We must unite- or we will be undone. Be brave! Be aware! Be vigilant!

Have your Australian Dreams just been crushed?