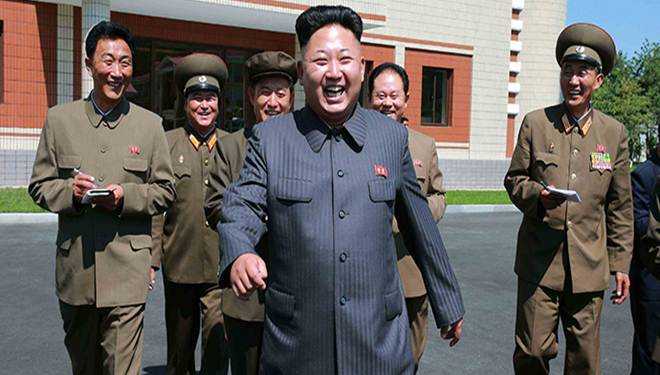 With the tension rising in Asia-Pacific region over the crisis prevailing in Korean peninsula the path towards another war is being paved gradually. Despite multiple sanctions North Korea has advanced its nuclear program which has grabbed world’s eyeball and the threat cannot be taken lightly.

Last year, in January Pyongyang claimed that it successfully tested a hydrogen bomb. Western nations were shocked but according to experts Pyongyang lied to the world. Truth or lie, it’s subject to debate since North Korea is governed by propaganda and no free press; there is nothing but to speculate.

But who is behind North Korea’s nuclear program? How did it obtain the technology despite sanctions? Even North Korea’s strongest ally in the region, China does not assist North Korea in nuclear advancement. North Korea got nuclear technology through another rogue state in Asia and its Pakistan.

The AQ Khan Network run by the notorious father of Pakistan’s nuclear weapons program, Dr Abdul Qadeer Khan, sold sensitive technology to North Korea. No investigation was ever carried out by the Pakistani authorities or United Nations in this matter. Dr. AQ Khan never paid for what he did and is living freely despite of his despicable actions. Because Pakistan was America’s ally in Afghanistan war the latter did not pressurize too much for Khan’s trial. In fact, the former military dictator General Pervez Musharraf pardoned AQ Khan in 2004.The transaction between the infamous physicist could cost the world dearly because North Korea is communist nation ruled by a wacky dictator. The Pakistan’s North Korea connection does not end here.

The North Korea dictator Kim Jong Un is much impressed by Pakistan ‘s policy of confronting India. It is “Thousand Cuts” strategy which was formulated in Army headquarters at Rawalpindi.

The way Pakistan’s Inter State Intelligence (ISI) has weaved its clandestine network in India has caught the attention of North Korean authorities. It plans to follow the same path and plant its spies in Japan and South Korea. These spies can be used to carry out assassinations, steal secrets and make forbidden trade.

The North Korean nuclear program is kind of immunity that it enjoyed till now. Till now most of the North Korea’s foreign policy was based on South Korea and Japan but under the regime of Kim Jong Un its changing. Now North Korea is showing eye to Uncle Sam. North Korea’s foreign policy has a flavor of Pakistan’s foreign policy in dealing with America because of common recipe called ‘blackmail’. DPRK shows its weapon might just like elephant’s tusk with no purpose of biting but to deter its enemies. Threats by North Korea under the guardianship of China prevents world to take action against it. Coincidentally, China is all weather ally of Pakistan also. In case of war, North Korea would have nothing to lose because it has nothing to offer like rich oil wells of Middle-East.

North Korea ’s Supreme Leader Kim Jong un spends a lot of time with his close aides and scholars in contemplation and discussions about the world affairs.

In particular, Supreme Leader has studied the civil war of Iraq, Libya, Egypt and the game of West there. Most of the times western politicians have failed to keep their promises and have taken different course of action where they smelled opportunity somewhere else. Many experts claim that under the pretense of removing weapons of mass destruction (WMD), survey was conducted of the vulnerable areas of defenses in Iraq and Libya. It won’t be wrong to say that information gathered from there may be one of the many reasons that helped the Americans defeat Saddam Hussein and Muammar Gaddafi.

Today, Kim Jong Un must have an eye on Syrian conflict and he must have observed that help for Syrian rebels increased even after Assad’s weapons of mass destruction (WMD) stocks were removed under Putin’s pressure. The West has played the same game again and again so much that its tactics are not secret anymore. All this signals to one thing that Kim Jong Un will not allow inspections of military facilities under any agreement. Under global pressure, it may allow inspection of only some sites that are not strategically important. Last year, several North Koreans suspected of passing on information to South Korea were tortured in facilities set up for the purpose in the northeast of the DPRK. If North Korea carries out “Thousand Cuts” strategy successfully it would result in slow and painful death of America’s ally (South Korea) in the region and the Chinese would gain an upper hand.

Since the demarcation of 38th Parallel that divides North and South Korea, the two nations are at war technically as there was no ceasefire or peace treaty signed. If Pyongyang falls, it would pave way to unified North and South Korea. The integration of North Korea’s current administrative and military apparatus in unified Korea would be unacceptable. Apart from war there is another way of unifying Korea through agreements.

Unlike Kim Jong 2, who had great animosity towards the people in south, his son Kim Jong Un does not abhors South’s societal construct. Although, the possibility of this is very less but an agreement based on mutual right, respect and benefits can be chalked out. The unification of Korea would be devastating for China because it would increase the American influence in the region and China would lose its pawn in the big game. The dragon never wants this and is in a dilemma of taming its wild pet.

When you play Game of thrones you either win or die. Kim Jong Un knows this very well and he will try everything to win. Interesting times lie ahead and yes, winter is coming.