The Only Subject where Donald Trump has an Anti-India stand 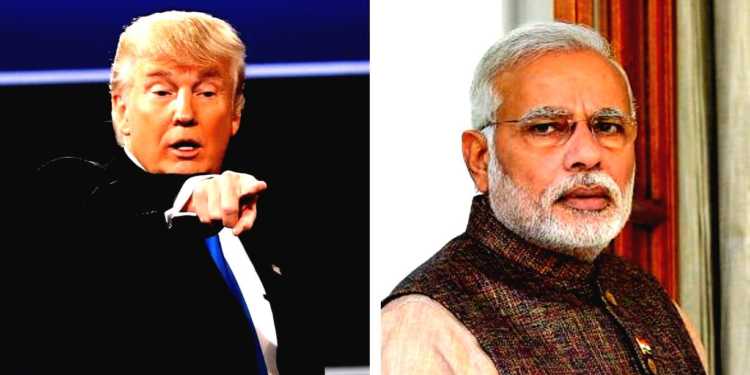 The recent G-20 summit saw an isolated USA fumbling for answers and effectively relinquished it’s status “as the leader of the world” as almost all countries except the USA pledged to follow the historic Paris Climate Agreement. The Paris Climate Agreement which was born in 2015 was a result of years of hard work of hundreds of diplomats and after numerous failed treaties(eg.Kyoto Agreement,1992)an accord was agreed in Paris with the aim to protect the environment and arrest Global Warming.

In December 2015, 195 countries signed an agreement to slow the process of global warming by making efforts to “hold the increase in the global average temperature to well below 2 degrees above pre-industrial levels and to pursue efforts to limit the temperature increase to 1.5°C above pre-industrial levels”. This means that the countries would try to limit the increase in global temperature rise. The agreement came into force in November 2016. The agreement also states the decision to limit the amount of greenhouse gases emitted by human activity to a level that can be naturally absorbed by trees, soils and oceans. Nations have pledged “to achieve a balance between anthropogenic emissions by sources and removals by sinks of greenhouse gases in the second half of this century.”

According to UN’s climate science panel, net zero emissions must be attained by 2070 to avoid dangerous warming. Global temperature has risen about 1 degree Celsius in the last half-century. In addition , the developed nations agreed to fund the massive move to a cleaner energy and meet the zero emission target especially for the developing countries. As part of a review mechanism, developed countries were also asked to communicate every two years the “indicative” amount of money they would be able to raise over the next two years, and information on how much of it would come from public financial sources. In contrast, developing countries have only been “encouraged” to provide such information every two years on a voluntary basis.

While this may sound unfair to the developed nations like USA, but its important to know that the additional responsibility on them is due to the fact that they are largely responsible for emitting almost all of the greenhouse gases from about 1850 to the 1980s.

i.e. A country is free to set it’s own targets regarding emission control and is free to revise it’s targets, upwards or downwards, without any legal implications. The Paris accord aims to achieve it’s targets through peer pressure and by bringing countries to a public promise and disclosure and growing awareness about global warming, the countries will follow through their promises.

However, as part of it’s promise during his election campaign President Trump pulled out of the Paris accord citing India and China , who he accused of cheating on the deal and having absolutely nothing to do till 2030 and bleeding USA of finances.

So are India and China, really cheating on the deal?

India was a late signatory to the Paris accord and perhaps a reluctant one too at the beginning citing financial assistance. A developing nation like India needs funds to move to clean energy especially when 300 million Indians are still without 24X7 electricity. India and China both have set their targets for 2030 like every other signatory and are well placed to achieve that.

Donald Trump said India will be allowed to double it’s coal power plants by 2020 and had reservations about moving to solar and wind energy as they would prove to be more costly. However, Indian officials have estimated that country might no longer need to build new coal plants beyond those that are already under construction. In a recent auction in India, developers of solar farms offered to sell electricity to the grid for 2.44 rupees per kilowatt-hour . That is about 50% less than what solar farms bid a year earlier and about 24% less than the average price for energy generated by coal-fired power plants. China too is doing it’s bit for the environment. China’s emission of carbon dioxide have peaked 10 years sooner than it’s government said it would. China has reduced coal use for three years in a row and recently scrapped plans to build more than 100 coal power plants. Sales of electric vehicles jumped 70% last year thanks to various government incentives whereas India lags behind in this aspect, there is every reason to be optimistic as Power Minister Piyush Goyal recently announced all cars sold in the country should be electric by 2030. Contrary to Donald Trump , clearly India and China are showing the way forward as the world pushes for a cleaner and a greener earth. PM Modi has made it clear when the Paris Agreement was first broadly agreed to in 2015 that more developed countries needed to shoulder more responsibility for reducing carbon emissions and he certainly isn’t blind to the repercussions that would follow after USA pulled out of the agreement with funds being the biggest hurdle.

The Green Climate Fund, one of the distributors of international UN renewables funding, announced $34.3 million in funding for a ground water and solar irrigation project in India. But President Trump stopped all contributions to the Green Climate Fund as part of it’s pulling out of the deal speech. Under the tenure of Barack Obama, the USA had been intending to contribute more than $3 billion to the fund. India still needs money to set up solar and wind farms. In that sense, it may hurt from the US pulling back. But unfazed by the accusations of Trump, India is working at a breakneck speed to move towards solar energy. India is set to pass Japan this year to become the world’s third largest market for solar(after China and the US).

President Trump has absolutely no reason to pull out of the Paris Accord. His withdrawal speech itself was confusing and exposed a man who seemingly was unaware of the simplest of the ground realities. He called the agreement as “draconian”. Paris agreement is voluntary and solely relies on transparency, surely an agreement cannot be non-binding and draconian at the same time. Perhaps , Donald Trump got swayed by the climate change deniers that are a plenty in his Republican Party. Only Syria and Nicaragua have not signed the agreement. Surely, the Americans would be so proud to be included in that group.

As the World pushes through a massive climate change mission, the likes of France, Germany, China and India are showing the way. It’s paramount that the environment is not left on the whims of a single person. More importantly, it will be important to sustain the current improvements to prevent natural calamity which threatens to wipe the existence of all things living on Earth and all nations must contribute to it because we have not inherited this world from our ancestors but borrowed it from our future generations. An Indo-China agreement and better co-operation on climate change will not just be a win-win for both the nations but the whole world. Simply put, India and China have a lot to gain from each other by being on the same side rather than constantly being at loggerheads.

India is all set to Confront the Chinese, USA and Japan will be on India’s side