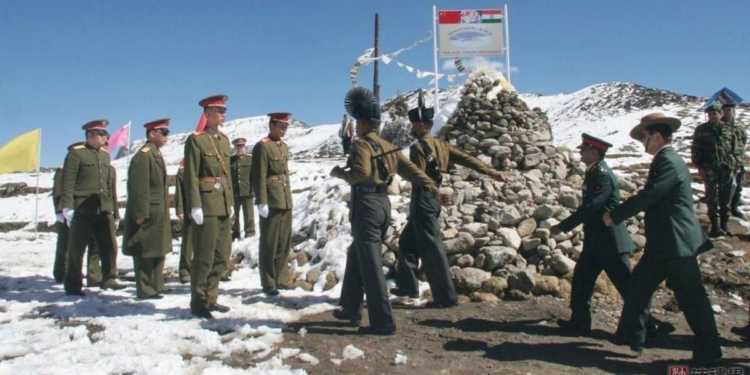 Amid the murmurs of a full-scale war with China, a section of Chinese experts have warned China against waging a war with India. The standoff at Doklam is over 40 days old now and with every passing day both India and more importantly China stand to lose. China is set to lose its lifeline, and the war eventually in case of an actual war.

According Macau-based military expert Antony Wong Dong “China is playing psychological warfare but it should realise that even if it defeated India in a war on land, it would be impossible for the PLA navy to break India’s maritime containment,” he said, pointing to the importance of the Indian Ocean as a commercial lifeline. Now, The Chinese import over 80% of its fuel consumption that travels through the Strait of Malacca and the Indian Ocean. The location of India is such that it lies in the heart of China’s energy lifeline and in case of a military conflict, there’s every chance that India will look to block China’s energy lifeline by using its location in a bid to cripple China. Also, India’s maritime containment is for all to see after the recent 10-day Malabar exercise which included USA, Japan and India holding a joint naval exercise and showcasing their maritime strength. A war with India will certainly destabilise the South China Sea which Chinese claim to be solely it’s, whose hegemony has been contradicted by USA, Japan, Vietnam and Philippines. USA recently, sent its warship to SCS as a show of support to Japan. One cannot rule out the involvement of USA and Japan to help India’s cause in case of a war with China.

Sun Shihai, an adviser to the Chinese Association for South Asian Studies, too echoed Wong’s views. He said he was concerned that the worst military stand-off in more than three decades would fuel anti-Chinese sentiment in India, as mistrust and hostility between the two countries run deep. If not properly handled, the border row could have a long-term impact on China’s efforts to expand its diplomatic and economic influence beyond the Asia-Pacific region with its “Belt and Road Initiative”, he said. China wants India to be a part of its One Belt One Road (OBOR) project as owing to India’s geographic location the success or failure of the ambitious project depends on India’s participation. Make no mistake, Chinese President Xi Jinping put immense pressure on India to join the project of which 29 countries are a part of but the Indian government didn’t yield. Liberals back home like Mani Shankar Aiyar and Sudheendra Kulkarni criticised the government for missing this opportunity. India’s opposition to the project is simple. The China Pakistan Economic Corridor(CPEC) that is a part of OBOR passes through Pakistan occupied Kashmir (PoK) and India can never be a part of such project. It is about India’s integrity and existence. CPEC tried to undermine India’s sovereignty and no Indian government would allow that. CPEC reflects China’s agenda of splitting PoK from India in its mission to achieve global leadership status. By joining OBOR, India would have had to forgo it’s claim to PoK. Also by continuously opposing India’s NSG bid and blocking India’s bid to declare Jaish-e-Mohammed leader Masoor Azhad to declare him a UN designated terrorist and now with the Doklam standoff, it will only push India further away from China and the handful of voices in India that supported China’s OBOR will also be muzzled. It is only likely that India will not even reconsider its stand on OBOR after the latest events.

China too is well aware of the futility of an all-out war for a desolate border area that remains frozen up for eight months of the year, it’s logistical cost being inestimable. The standoff is already having a knock-on effect. China’s intense psychological war “psywar” has led to a trade war between the two countries. The Regional Comprehensive Economic Partnership which was initiated by the members of ASEAN, was recently held in Hyderabad which saw a slowing down of discussions. The Chinese were hoping for this partnership to succeed amidst the pulling out of US from the Trans-Pacific partnership, a similar free trade agreement after Donald Trump became President. China was hoping that the success of this partnership which it promoted so zealously would further enhance its position as a global leader. But India threw a spanner in its works by denying to give greater market access to Chinese goods and instead demanded for greater market access for its skilled workers leaving China red faced.

Recently, The Chinese have been hurling empty threats on India like supporting the non-existent independence movements of Sikkim and Arunachal Pradesh. However back home, things for Chinese are not all rosy. Hong Kong remains unstable in the face of multiple democratic movements and Tibet continues to be volatile as always. Also, the $60 billion CPEC which passes through PoK will be under threat in case of a war. China will further risk the fate of CPEC and OBOR if it escalates tensions as India can pave hurdles on the progress of OBOR , a project in which China has already heavily invested in.

China is said to be extremely protective of its investments and India expects it to only hurl empty threats and not escalate tensions. Maybe that’s why China stopped Indian pilgrims from visiting Mansarovar but not trade through Nathu-la. China stopping the trade route might have invited a similar Indian response.

However, by not bowing down to Chinese “carrot and stick” policy, India has called China’s bluff. China wanted to control the narrative of the Doklam stand off and it’s increasingly clear that it is China who is on the back foot. By constructing a strategic highway that would have given the Chinese a militarily advantageous position, it expected Bhutan’s diplomatic protest but a bully being bully, Bhutan’s protest has fallen to deaf ears. But China half expected India’s swift military action in Doklam to bail out Bhutan and deny China holding a knife against it leading to a logjam.

India, in the face of vitriolic warmongering, has defiantly stood up to the Chinese and refused to budge. By calling the bully’s bluff, India has set an example for other Asian states to emulate. Chinese “psywar” has resulted in next to nothing and only hampered China’s hard-earned reputation. China wanted the narrative to focus on India’s aggression in Chinese territories and play the victim card like it did in 1962 and 1967. But with Bhutan’s support owing to India’s excellent diplomatic ties due to PM Narendra Modi’s endeavours, the narrative quickly changed to China being a bully and bullying a small nation (Bhutan) and India stepping in to help it’s one of the closest allies. China has caught itself in a mess completely of its own making and India must not let go China easily. Both countries can ill afford a war owing to the excellent trade partnership but China has more to lose. The longer this standoff drags on, more questions will be raised on the sustainability OBOR which China simply cannot afford. The upcoming autumn’s Communist Party Congress Which Xi Jinping is looking to head and cement his position as China’s most powerful leader since Mao Zedong, he cannot afford this issue to drag on and hamper OBOR and India should turn the tables on China and look to defeat China in its own game. By playing “psywar” with the Chinese and letting the issue to drag on till the harsh winter forces both the countries to retreat and restore the status quo, Xi Jinping and China will be left sulking and possibly Chinese losing their influence in Asia as South Asian countries will continually look to India’s brave defiance in face of Chinese aggression.

The Chinese experts are perhaps not wrong in warning China of raising the stakes against India and in all probability Chinese won’t unless it wants to self-destruct its economy. One must fear the health of these experts as free speech and open criticism of government is generally not met warmly in China. India on its part must ensure that there are no more Chinese incursions by teaching China a lesson in Doklam. If India succeeds in its mission, China will lose its fear factor that it prides itself of and uses to it to get favours from countries like Sri Lanka and Philippines.