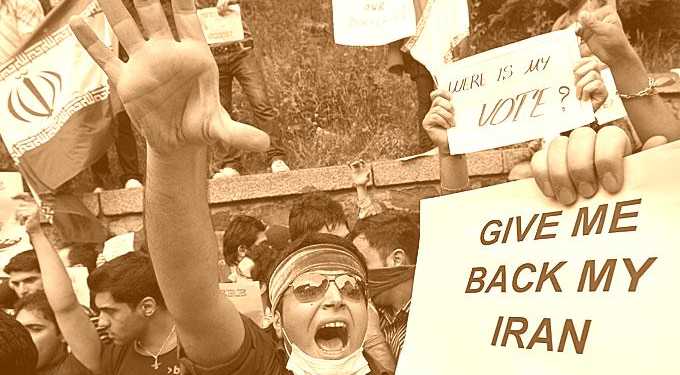 On 28 December, some people gathered at the Shohadah square in Mashhad – the second-most populous city in Iran to protest against their government, demanding accountability, transparency and an end to the repressive clerical status quo. For more than a week, thousands of Iranians rallied behind them in different cities of Iran. More than a thousand people have been rounded up and detained in Iran over the past week to crush the dissent. On the surface, the protests were similar to the discontent that erupted in the summer of 2009, following the fraudulent re-election of Mahmoud Ahmadinejad to the Iranian presidency. However, there are clear signs that these protests are more broad-based than the protests of 2009.

Let’s analyze the cause of the biggest anti-government protests in Iran after the Iranian revolution.

Initially, Iran’s economy was badly affected for several years because of sanctions imposed by the international community over the country’s nuclear programme. In contrast with the hopes of economic recovery and general betterment in living conditions after the interim deal between Iran and P5+1 (China, France, Russia, the United Kingdom, and the United States, plus Germany) in 2013, the situation had deteriorated hopelessly further. The protesters were angry at the continuously rising food and petrol prices. In case of some basic commodities such as poultry and eggs, the price rise has been 50 to 60 per cent in a span of less than one month. The price of eggs became a symbol for Iran’s economic problems and the failure of the Rouhani government to solve them. When protesters first assembled on December 2017 in Mashhad, they chanted “No to high prices,” and, “Death to Rouhani.” Gross domestic product (GDP) contracted 1.4% in 2015 – the year President Hassan Rouhani, a moderate Islamist, agreed with world powers to limit Iran’s sensitive nuclear activities.

In 2016, after the deal was implemented and most sanctions were lifted, the economy bounced back sharply, and GDP grew 12.3%. Thanks to the oil and gas industry but the recovery was not significant as many Iranians hoped. US sanctions on financial transactions with Iran are still in place, which deter foreign companies from doing business there. To make situation worse in October 2017, US President Donald Trump refused to recertify the nuclear deal and called on Congress to consider restoring sanctions. The budget presented by President Hassan Rouhani on 10 December 2017 seems to have added fuel to fire. The budget not only had a magnifying effect on prices of commodities of daily use, it allocated huge funds to religious bodies and endowments in Iran and abroad.

There’s a theory among some analysts that these protests weren’t spontaneous. In fact, they were actually organized and pre-planned by conservative Iranian politicians. Mashhad where the protests began is dominated by a conservative religious charity, whose directors are aligned with Rouhani’s political opponents. The plan was to exploit Iran’s economic woes to undermine the president’s support. This theory is hard to prove but if it’s true then it backfired terribly. It started to go wrong for hardliners, when more and more people joined the Mashhad protests. Students and women started participating in large numbers. These newcomers shifted the tone of the protest blaming Rouhani for the poor economic performance to blaming the Iranian government and political system more broadly. Within a day, the protests spread to Kermanshah, Rasht, Sari, Qazvin, Hamadan and the holy city of Qom, where most of the Ayatollahs live. The most significant aspect of the protests has been the anti-Islamic character of these demonstrations. There is an iconic picture of these protests in which a woman is waving a white scarf while refusing to don the hijab.

3. Adventurism in the Middle-East

Despite its own economic woes Iran has been fighting proxy war on several fronts in the Middle- East. It’s backing Bashar Al-Asad on the Syrian front and funding Houthis in the Yemen war. In Gaza, it supplies weapons to Hezbollah that launches missiles on Israel and conducts terrorist attacks.

Protesters were angry at the Iranian meddling in foreign affairs, which they perceive as jeopardizing their interests. Some common slogans by protesters were “Mullahs get lost”, “Clerics, return us our country”, “Death to Khamenei”, “Death to Hezbollah”, “Not Gaza, Not Lebanon, my sacrifice is for Iran”, “This is the end of your adventure”. The money which Iran uses to fund terrorism across the border can be used for the benefit of its own people back at home.

He blamed Washington, Britain and Saudi Arabia for the protests. He did not forget to mention Israel’s hand in the mayhem. The reason being given is that Israel wants its main regional rival eliminated and aspiration to replace the Islamic Republic with pro-western rule.

When the last round of mass protests hit Iran in 2009, there was a serious debate over whether the United States should vocally align itself with the protesters. The Obama administration declined to do so, on grounds that it would make the protesters seem like puppets of American interests. With the change in government, unlike 2009, the Trump administration expressed support for protesters. President Trump tweeted several times in their support. He wrote “the people of Iran are finally acting against the brutal and corrupt Iranian regime.”

The people of Iran are finally acting against the brutal and corrupt Iranian regime. All of the money that President Obama so foolishly gave them went into terrorism and into their “pockets.” The people have little food, big inflation and no human rights. The U.S. is watching!

US Ambassador to the United Nations Nikki Haley has called for two separate UN emergency sessions to discuss the situation. Netanyahu in a video message too sent his best wishes to the protesters who were fighting tyranny.

The truth of the matter is USA and Israel may try to influence the protests but it all depends on the circumstances in Iran that breed these protests.

At the time of writing this article, the head of Iran’s Revolutionary Guards claimed that a string of anti-government protests were over after six days of unrest. Protests might have been crushed by Iranian Revolutionary Guards, but it does not mean they won’t happen again. Many Iranians are unhappy about the way things are being run in their country and they are demanding a change. There is little doubt that they will be satisfied with improved economic circumstances. Apart from economic change they may also demand radical social change along with political re-configuration of Iran. More than half of the Iranian population is under the age of 30, which means they have not witnessed what life under the Shah was like. The only state they know is the Islamic Republic, and they are not afraid to criticize it. It’s an alarming bell for the Ayatollahs. Better late than never they get the message otherwise they are one step closer to their doom with each passing day.

India’s ISRO and Japan’s JAXA are Coming Together