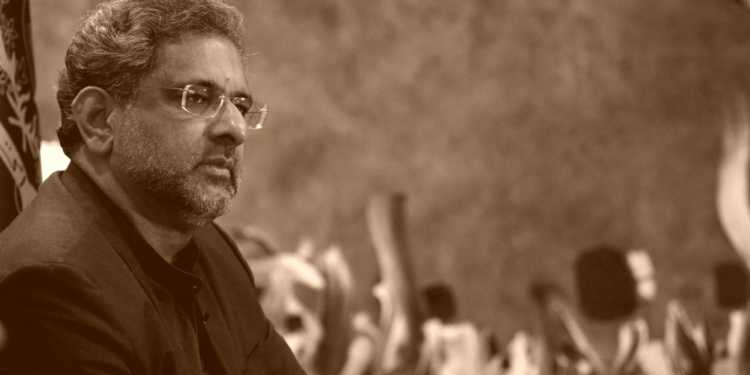 In a major embarrassment for Pakistan, the country’s prime minister was frisked like any other commoner at the JFK airport in New York. The incident took place last week, although it has only emerged now. Footage of the incident is being widely circulated on social media.

Far from the red carpet that is laid out at the airport when a head-of-state visits another country, prime minister Shahid Khaqan Abbasi was made to stand in the airport queue like any other common traveler. He was made to undergo the usual Airport security check, and was seen carrying his own bag after it came out of the x-ray machine. Not only is this a major embarrassment for Pakistan, it is testament to how the country’s standing internationally has reduced to that of a pariah state.

Pakistan Prime Minister frisked at JFK Intl Airport. The television footage shows that Pak PM was frisked by the security personals on his arrival in USA where he was visiting his sick sister.? pic.twitter.com/dzZ9WEhrit

Republic TV’s Aditya Raj Kaul reports that the prime minister was even asked to take his shoes, belt and clothes off. He has drawn an interesting parallel too.

Kulbhushan Jadhav’s mother and wife were harassed and forced to change clothes, remove bangles, bindi and mangalsutra in Pakistan.

And now Pakistan Prime Minister was made to remove his clothes, belt and shoes at a US airport.

Destiny is an equaliser. Karma.

This sort of treatment is unheard of. Strict protocol and certain decorum are adhered to even if visiting dignitaries of a particular country do not see eye to eye with the host country. This incident takes us back to medieval times, when visiting dignitaries couldn’t be trusted by a particular kingdom and were searched thoroughly to ensure that they weren’t carrying any lethal weapon. Perhaps Pakistan has attained such a standing in the international arena, wherein not a single citizen including the prime minister can be trusted to enter another country without malicious intent. Recently, staff of the country’s national airline PIA, were found to be involved in a global drug-trafficking operation as well.

The Pakistani media has tried to spin this incident, claiming that the prime minister was on a personal visit and that he is a man known for his simplicity. A personal visit doesn’t absolve anyone from their official post, especially if they are the prime minister of a country. Moreover, there are doubts about how personal this visit really was, considering he met vice-president Michael Pence during the visit. And however simple one might be, if one is the prime minister of a country, one doesn’t allow themselves to be frisked at the airport. That would be monumentally stupid, considering it would lower the stature of your own country, just like this incident has. But trust the Pakistanis to put a moronic spin to it just to save face!

The Trump administration is the first administration in decades to have seen through Pakistan’s double-games, and has come down hard on the rogue nation. This incident comes at a time when the Americans are considering clamping down hard on the terrorist state by imposing some serious sanctions on it. If reports are to be believed, the Americans attempted to put pressure on Pakistan by suspending $1.3 billion worth of aid in January, but are unsatisfied with the result. Cutting aid altogether is now on the cards. This was preceded by a series of suspensions in aid, and even strikes on terrorist camps in Pakistani territory by the Americans.

As the Trump administration looks to make another North Korea out of Pakistan, it is quite clear that the humiliation meted out to the Pakistani prime minister was part of a series of instances to corner and embarrass the rogue state. Harboring terrorists and utilizing international aid to further strategic objectives using the terrorists they harbor is unacceptable. The Americans seem to be showing the Pakistanis their place.