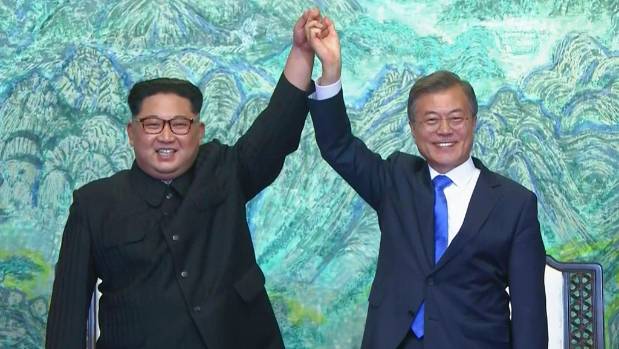 North Korea and South Korea, two bordering nations sharing the same race and ethnicity have been at loggerheads with each other for many decades. The dictatorial rule in North Korea did not allow freedoms to its own population, how then could it tolerate the freedom being enjoyed by the citizens of its neighbour and brother nation, South Korea? The question as to when the dictatorial regime in North Korea would collapse has plagued the minds of scholars and analysts around the globe for ages. The times are finally changing and for the better. North Korean leader Kim Jong-un has finally crossed the border into South Korea, thankfully this time for holding talks. No accusations or name-calling have emerged from either side of the Korean border. Kim Jong-un has made this historic visit after being pressured from US President Donald Trump. Trump might be over the top in expressing his opinions and often gets carried away when dealing with the liberal press but he sure can pack a punch. It is a phenomenal event in the history of the world, as the Korean War which began in 1950 and has till date not officially ended could soon come to a close.

Attending a historic summit on Friday in Seoul, North Korean leader Kim Jong-un has agreed on making Korean Peninsula a nuclear-free state and to end the Korean War officially after a consultation with the United States of America. These words coming from the mouth of the North Korean leader would have been unimaginable just a few days back, but the Trump administration maintained its hard line approach to the Communist regime, leading to the North Korean leaders’ acceptance of a truce. It must be pointed out that this is the same North Korea which prevents people from the North crossing over into the South. For Kim Jong-un to cross over into South Korea and hold talks with Southern President Moon Jae-in is unprecedented and a huge statement for a nation that punishes people trying to cross the border and head South with torture or a death sentence. This is the first time that a North Korean leader has ever set foot in the South.

History continues to be made under this president! You might not like his tweets but you can’t deny his results! #maga #korea

China was probably the only nation which had openly supported the North Korean regime and held a considerable sway over the North Korean leadership as well. China enjoyed a monopoly on the purchase and sale of goods and raw materials from North Korea. This talk between the North and South Korean level will give a setback to China too. China stands to lose its monopoly on the resources it purchases from North Korea while its inflow of goods in the North Korean lands could also receive a setback if South Korea is allowed to engage in trade with the North. The sway which China holds over its other neighbouring countries could also receive a major setback owing to this Korean coalition.

The talks which went on for half an hour consisted of some diplomatic formalities with increased the hopes of reconciliation between the two countries. China might be unhappy with the way these talks have taken place, but this development definitely showed the world the power of the Trump administration. The pushover technique of Donald Trump worked in the case of Kim Jong-un and it has finally borne fruit. The Korean Peninsula will become a happier and more prosperous place when these talks finally see the light of the day. It is a long road, but as is often said, well begun is half done.