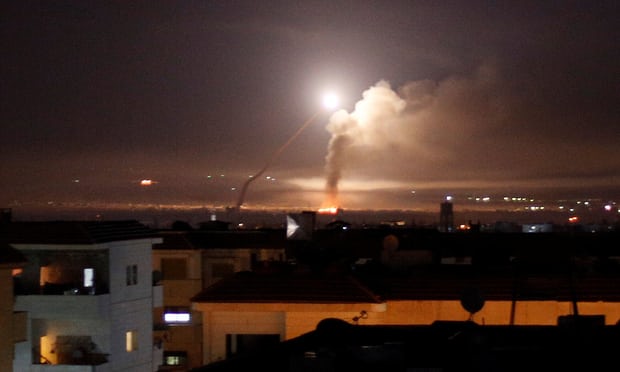 In what seems to be the biggest manifestation of the shadow war between Israel and Iran, Israeli military has struck Iranian military installments deep inside Syrian territory. In what is seen by many as the emergence of a major military conflict between the two nations, Iran fired twenty rockets into Israel from Syria. Most of the rockets were intercepted by Israel’s Iron Dome aerial defense system. However, the attack triggered a response from the Israeli military which yet again proved Israel’s absolute military supremacy and prowess in the region. Israel targeted strategic installations including intelligence posts, command posts and ammunition depots. In major assaults, a radar site and an ammunition depot were totally destroyed.

The IDF has struck dozens of Iranian military targets in Syria in response to the Iranian rocket attack against Israel. Quds force is behind attack and has played the initial price. IDF remains ready for various scenarios but does not seek to escalate the situation. pic.twitter.com/4rC8gHK2LG

According to reports, almost all of Iranian military infrastructure in Syria has been hit badly by the military strikes carried out in a massive retaliation by Israel. Israeli Prime Minister Benjamin Netanyahu said in a YouTube statement issued on Thursday that Iran “crossed a red line”. Holding that Israel action was totally justified, Prime Minister Netanyahu has reflected upon the Israeli intent of exercising its right to defend istelf. He made it clear that Israel won’t exercise any restraint and strike back with full vigour causing disproportionate damage to anyone attacking Israeli territory. He also made it clear that whoever prepares to attack Israel will face pre-emptive strikes by Israel. Israeli Defence Minister Avigdor Liberman also confirmed that Israel had attacked the entire Iranian infrastructure in Syria and has caused huge damage. He made it clear, “if it will rain in Israel, there will be a biblical flood on the other side.”

This comes on the heels of a mammoth shock given to Iran by the Trump administration. President Trump announced this Tuesday that he will withdraw the United States from the 2015 Iran nuclear deal and restore economic sanctions against Iran as they stood before the deal. He also stated that this will sever Iran from the global financial system. He also made it clear that whoever helps Iran in building up a nuclear arsenal will also face the wrath of far reaching sanctions. The sanctions on major sectors such as Iran’s ports, oil companies of Iran, foreign financial institutions transacting with Iranian financial institutions, etc. are going to be imposed after the expiry of 180 days. This has triggered a countdown before Iran plunges into the pre-2015 era when its economy was in tatters. Iran is already facing high inflation and its currency has lost 25 percent of its value against the US dollar. With an unemployment rate of 11 percent and a banking system which has plunged into a credit crisis, Iran is definitely going to face trying times even before the sanctions are re-imposed. The country’s GDP growth which has seen a recovery from negative 1.5 percent in 2015 is also going to take a toll. A healthy GDP growth rate of 4.3 percent had been predicted for Iran, however, with the sanctions being re-imposed it is set to go down.

With matters escalating between the two sides and the Middle East further plunging into another crisis, we could see more similar incidents take place in the coming future between Iran and the US-Israel nexus.