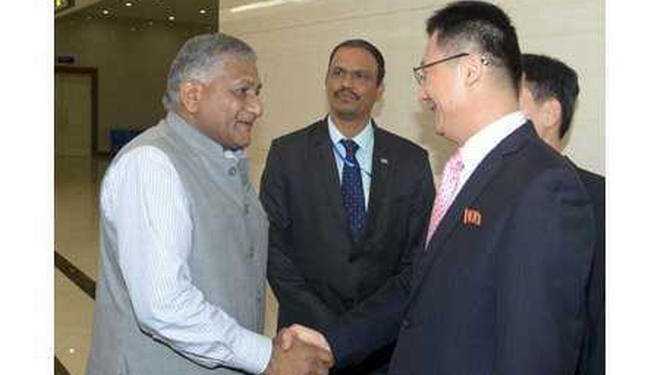 Donald Trump has been ridiculed aplenty and has come under increasing scrutiny by liberals ever since he assumed the office of President of the United States of America, but time and again he has managed to silence his critics and stand up for the USA’s allies. Now he has managed what was conceived to be impossible under Obama’s tenure. North Korea, after persistent efforts from the USA is finally abandoning its nuclear programme which threatened to plummet the World into chaos, and has now decided to open up to the World. India, sensing the opportunity at hand, has already started making moves endearing itself into the good books of the hermit kingdom.

India’s Minister of State for External Affairs General V K Singh paid a two-day visit to North Korea in the third week of May, which incidentally happens to be the first ministerial visit from India in nearly two decades which took place at the pretext of an invitation from the North Korean government. While the details of VK Singh’s visit are still unknown, his visit signifies the fact that India being a rising power is actively seeking a role in this dramatic geopolitical development. China being China is not particularly pleased with the recent developments and they have every reason to be worried. China, who defended North Korea through thick and thin in lieu of reaping benefits when the hermit kingdom finally opened up to the world, has seen its rug being snatched right beneath its legs thanks to the USA and its allies.

The Global Times, an English language daily in China, has speculated that the primary concern for VK Singh and India on his visit to the isolated country was to get assurances that post the country’s denuclearization; North Korea won’t indulge in any technology transfer with Pakistan. It is widely believed that Pakistan unearthed the power of nuclear missiles from North Korea and the latter played a huge role in helping Pakistan develop its nuclear arsenal. North Korea on its part has assured India of its concerns and pledged not to indulge in any activities that threaten the security and stability of India.

It is no secret that North Korea is looking to open up to the world in a last ditch effort to save its sinking economy. While China, being the largest trading partner of North Korea, gleefully expected the country and its natural resources to fall into its own hands, India has moved swiftly as VK Singh discussed future economic cooperation. It is important to note that India is North Korea’s second-largest trading partner both in terms of imports and exports and is eagerly looking to tap the vast natural resources of North Korea. If anyone had doubts what India had achieved by sending VK Singh to North Korea, The Global Times, which works under the Chinese government, admitted that with this visit India has won some advantage in future economic cooperation with North Korea. The two nations also explored cooperation in areas such as vocational education, agriculture, pharmaceuticals, promotion of Yoga and traditional medicine.

India’s recent bonhomie with North Korea and the latter’s reciprocation is no overnight phenomenon. India has had longstanding diplomatic relations which have withstood the test of time as India even refused to reduce bilateral diplomatic activity under intense pressure from the USA under Obama and in face of harsh UN sanctions. North Korean Foreign Minister Ri Su-Yong visited New Delhi in 2015 which surprised many and enraged many within the USA, but India managed to pacify the USA by arguing that at least some channels for talks with the isolated country must remain open in case both the sides decide to disengage. Fast forward to 2018, India has been proved right to stand its ground and might play a huge role in descalating tensions in the Korean peninsula keeping in mind the fact that India shares excellent relations with all the key players involved in the Korean stand-off, barring China ofcourse.

All this has happened while China expected to make North Korea the latest entrants into its debt trap and further assert its authority. But Donald Trump had other ideas and with the help of some deft diplomacy, he has managed to take away a country which was right under China’s. Trump indeed has halted the Chinese juggernaut and India will have a huge role to play in ending China’s dominance not only in Asia but across the world as well. It seems China has met its match in President Trump who won’t mind backing Narendra Modi led India to the tilt against the China-Pakistan nexus.