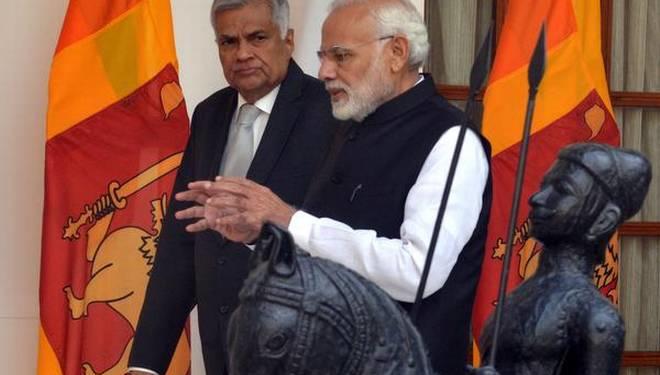 The success of Modi government’s foreign policy has achieved yet another success. The government is now reaping rich dividends as far as its diplomatic and friendly relations with Sri Lanka is concerned.

This time around Sri Lanka has set the stage for closer relations with India ahead of prime minister Ranil Wickremesinghe’s visit to India. Sri Lanka has reportedly stalled a US$300 million housing deal to China in favour of a joint venture with an Indian company. In April this year, state owned China Railway Beijing Engineering Group had won a tender worth more than US$300 million to build 40,000 houses in Jaffna in Sri Lanka’s north, with China’s Exim bank to provide funding.

The project has been halted as the residents demanded brick houses over concrete houses that were proposed. The residents reportedly prefer traditional form of dwelling over the planned houses. Now, in a major snub to China, Sri Lanka government spokesman Rajitha Senaratne said the cabinet has approved a new proposal for 28,000 houses worth 35.8 billion rupees (US$210 million) to be built by Indian firm ND Enterprises and two Sri Lankan firms in the north and east. There is a total requirement of 65,000 houses and Senaratne added that China could be considered in future. The rest of the houses are to be built by the firms who are willing to construct them at lower rates.

The Chinese foreign ministry spokesperson Lu Kang has meanwhile stated that China’s cooperation with Sri Lanka was derived from consultations on an equal footing and he hoped that cooperation would be viewed objectively. Critics have been stating that big port development project and related infrastructure development by the Chinese in southern Sri Lanka has already plunged Sri Lanka deep into debt. India which has built 44,000 houses in the reconstruction phase after a 26 year war in northern Sri Lanka. The Chinese influence is therefore considered obnoxious and a huge concern by India.

However, ever since the Sirisena regime has come up in Sri Lanka, the Chinese influence has been consistently reduced. A spate of decisions have brought the island nation with cultural and ethnic relations closer to India and the Chinese influence is not as significant as it was in the previous regime. The current regime has taken a number of pro-India decisions and has reversed the trend of ever increasing Chinese influence during the Rajapaksa regime. This latest step of stalling a Chinese project and in turn awarding a part of the project to an Indian firm should be seen as a clear manifestation of pro-India stance by the island nation. The two nations have not only had a friendly relationship in the past but share a long standing historical and cultural relationship. This trend under the present Sri Lankan regime comes as a huge breather for India.

The stalling of the housing project which had been awarded to the Chinese should not only be seen as a step aimed at reducing the Chinese influence and taking a favourable stance towards India but also as an attempt by President Sirisena to placate New Delhi after the fake news last week quoting the Sri Lankan president as alleging the Indian intelligence agency, R&AW of plotting his assassination. This report was seen as a roadblock in Indo-Sri Lanka relations. However, the Sri Lankan president soon denied these allegations and even had a telephonic conversation with prime minister Modi wherein president Sirisena cleared the air around these allegations. And now Sri Lanka seems to be soothing India and making it clear that India is a valuable and strategic ally in the Indian Ocean region.

With this it can be convincingly said that at least for now India’s interests in the Indian Ocean region are safe. Sri Lanka is a strategic ally given its geographical location and the Modi government having realised that has made sure that things do not go out of hand.

Is the international community done with Saudi Arabia