Tulsi Gabbard to run for 2020 presidential elections in the US ? 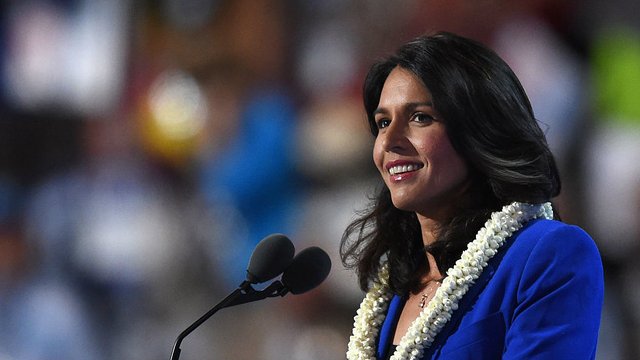 Tulsi Gabbard who has been a member of the US Congress since 2013 could run for presidency elections in 2020. She is the first Hindu lawmaker in the US Congress, having been elected to the House of Representatives from Hawaii. She was also the first US lawmaker to take oath on Bhagavad Gita. Gabbard was born in a Catholic family in Samoa, and her mother, Carol Porter Gabbard professes Hinduism. Tulsi Gabbard embraced Hinduism ever since she was a teenager and is well-versed in the scriptures.

Dr. Sampat Shivangi, a doctor of the Indian origin, who is considered close to the Hindu lawmaker gave this indication during a programme in Los Angeles this Friday. Speaking at the Medtronic Conference, Shivangi introduced Gabbard and said that she could be the next president of the US in 2020. This statement was made in the presence of the four-time lawmaker Tulsi Gabbard, It was marked by a standing ovation. However, this was neither denied nor confirmed by Gabbard.

It is being expected that a decision on her candidacy could be taken after Christmas. However, given the present situation, she could take a year before she announces her decision to run for the top post officially. It is also being said that she and her team has quietly started reaching out to prospective donors for their support, including a large number of Indian Americans. It is believed that the Indian Americans are being targeted in a big way as a part of her campaign.

This does not come as a surprise given the fact that she is already quite popular among the Indian Americans. Throughout her political career, she has nurtured Indian Americans as a constituency and now it is only natural that her team is reaching out to this community, which is considered to be the richest ethnic group in the US after the Jewish community. The Indian American community could thus help her in a big way if she decides to run for presidency.

Her candidature would, most probably, augur well for Indo-US relations as well, given Gabbard’s popularity among the Indo-Americans. Her popularity within the Indian American community would give a new dimension to the relations between these two nations, which are already going very strong. If Gabbard were to contest in the race to the White House, there would be a cultural connect with India given her Hindu background. This had also clearly helped her in nurturing the Indo Americans as a constituency during her political career. Her rise also symbolises the rise of Hinduism as a whole on the global sphere. There was a time when it seemed as if Hinduism was restricted in its popularity to a particular region. However, now Hinduism is being embraced all around the world due to its tenets and philosophy. And with someone like Gabbard making it big at such a high level, it shows that Hinduism is gradually becoming popular all over again after it suffered historical setbacks in popularity due to invasions and campaigns of conversion that it had to cope with for several centuries.