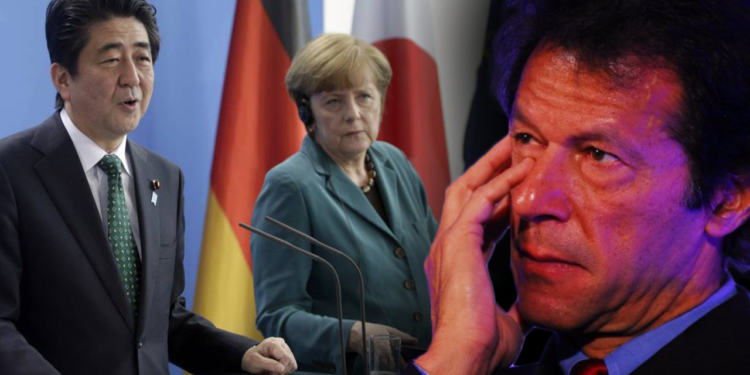 The difference between the two neighbouring countries of South Asia is that while one of them just has an imbecile person as a prime ministerial candidate, the other has actually elected an imbecile person as the prime minister. In light of the Iran visit, Pakistani Prime Minister Imran Khan has successfully added a boastful “international embarrassment” to his list of legacies alongside a “terrorist supporter”. The fruitfulness of the Iran visit is yet to be ascertained but Imran Khan has surely drawn widespread international attention due to his latest stunt.

If Imran Khan has to be believed, the two countries of Japan and Germany share a border. During his two day visit to Iran he stated on Monday, “The more trade you have with each other your ties automatically become stronger…Germany and Japan killed millions of their civilians until after the Second World War when they both decided to have joint industries on their border regions”.

Before proceeding with anything, a quick look at the world map.

The two countries referred here by the learned Prime Minister have a distance of 9,043 km between them. Moreover, Japan happens to be in East Asia and Germany in West Europe, which are two separate continents. It is highly unlikely that joint industries were built between the two nations. How Imran Khan can possibly have them to share a border between them is something that even the Prophet cannot answer.

This shameful incident comes in light of the Iranian visit which was made by Pakistan in an attempt to soothe relations with Iran. The region of Balochistan, on the border between the two countries, is facing unrest due to incessant attacks by each country’s nationals on the other’s. In such a tense situation, Imran Khan went and made a huge mockery of himself.

The social media is having a field day over the incident and several have come out tweeting on the imbecile statement.

Japan is an island country in East Asia located in the Pacific. Germany is in central Europe. They had the same location during the 2nd World War in which they were allies. But PM Imran thinks otherwise and says so before international audience. pic.twitter.com/aR45Y7T2bP

Looking into the history, after World War II, it was France and Germany who had joined hands to lay the foundation of the European Union. Also, Germany and Japan were allies during World War II. Either, Imran Khan is lacking knowledge in history or in geography, the fact remains that he has questionable skills. Even if the country is Pakistan, democracy should have certain standards of education in order for a person to be eligible for the post of a Prime Minister. Whatever the educational standards are there internally within the country, it should be kept in mind that a Prime Minister represents the country on the international front. The geographical error made by Imran Khan is of such a nature that any prudent 10-year-old will know of. It is sad, though not surprising to see the level of education in Pakistan going down to such drastic levels.

Moreover, this isn’t the first time when Imran Khan has showcased his lack of geographic skills. In December last year, during the Envoys Conference on Economic Diplomacy which Pakistan hosted, Imran Khan had he referred to Africa as an “emerging country”. The poor fellow either didn’t know the difference between a country and a continent or knew and thought Africa to be the former.

Being his country’s prime official and a spokesperson, Imran Khan has embarrassed his country down on an international sphere, not that Pakistan had much of a reputation to maintain in the first place. He has successfully shown how the golden proverb, “It is better to keep your mouth shut and let people think you’re an idiot than to open it and remove all doubts”, is accredited to people like him.