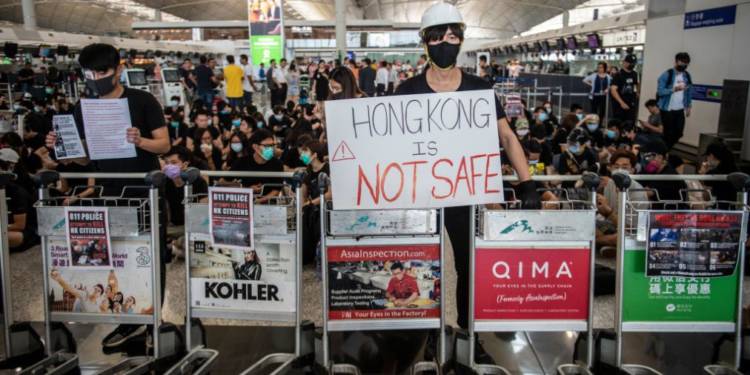 Recently, India abrogated Article 370 that granted special status to Jammu & Kashmir. While the move was taken with a view to ensure speedy development of the region, the so called liberal platforms started a systematic propaganda against India’s move on Kashmir. Leading the international media is British Broadcasting Corporation or the BBC which was called out a number of times for its skewed and controversial reporting on sensitive issues. It came under fire for putting out such reports which are factually incorrect and overtly misleading. In a similar ‘exclusive video’ released by the BBC, it had claimed the Indian security forces had fired on protesters. However, the ground situation was totally contrary to what BBC had projected, as a matter of fact verified official reports had clearly dismissed any incident of firing and also refuted the claims of large scale protests in the region.

While Hong Kong, a Chinese special administrative region, is currently passing through a deep political crisis, global liberal platforms have remain fixated on Kashmir. The ongoing protests broke out in Hong Kong two months ago after the local authorities proposed a Bill which would allow extradition of suspects to such places with which Hong Kong does not even have an extradition treaty, including mainland China. Many saw this bill as a dilution of Hong Kong’s autonomy promised under the ‘one country, two systems’ model of governance. The Police responded brutally to protests, that must have fuelled even more public anger in the city. Even though the Bill was suspended amid public outrage, the city continues to remain embroiled in political crisis. Graffiti appearing across Hong Kong has been calling for “a revolution” and “liberation”. Reportedly, the protests are no longer just about the Bill. The pro-democratic protestors have also demanded the resignation of Ms. Lam, the Chief Executive of Hong Kong and the architect of the controversial Bill. They have also been demanding withdrawal of the Bill, an independent probe into the clashes between the police and public, dropping of all charges against arrested protestors and finally reforms in the electoral process. The demands seem totally fair and democratic, however the liberal platforms and activists have chosen to ignore Hong Kong and remain focused on Kashmir.

The tense political situation in Hong Kong is further aggravated by the fact that Beijing hinted that it could interfere to end the crisis. In what clearly gives a very bad signal, China has said that Hong Kong’s protest movement has reached “near terrorism.” The political crisis worsened after the protestors confronted and held a man at the airport, they believed was an undercover Chinese agent. However, he turned out to be a reporter from the Global Times, a national tabloid run by the ruling Communist Party’s official People’s Daily. People’s Daily has also used way too strong language about the protestors. It has called for “using the sword of law” to restore order.

As per an NDTV report, thousands of Chinese military personnel waving red flags paraded at a stadium in a city across the border from Hong Kong. Armoured vehicles were also seen inside the stadium. The fact that it comes in the background of pro-democracy protests in Hong Kong and calls for “using the sword of law” to re-establish order in Hong Kong, makes this development very important. A confrontation seems imminent in the present case.

It is shocking how BBC, The Guardian or any other liberal platform or activist has not extensively covered the dire political situation in Hong Kong. It seems that such liberal activists are keen on using Kashmir as a smokescreen to avoid mentioning the Chinese atrocities in Hong Kong.