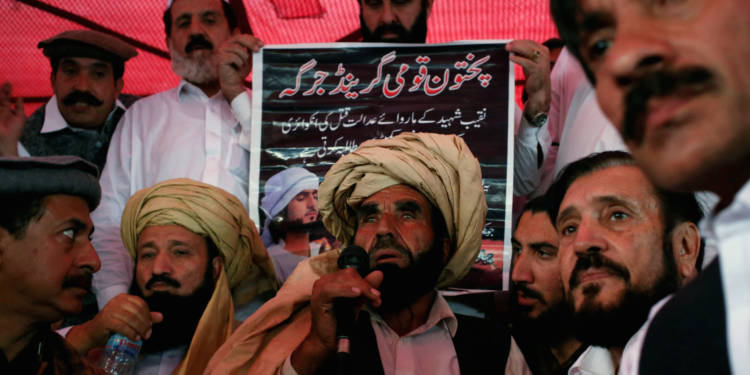 With radical Islamic nationalists in control of Pakistani administration, Pakistan over decades of its creation has witnessed one of the worst records regarding efforts of the state to safeguard rights of its minorities. From religious to ethnic, minorities in Pakistan have been a victim of the oppressive policies of the largely Punjabi dominated Pakistani administration, which has not only exploited these minorities but have also stripped them of their basic human rights.

One such community in Pakistan which has been fighting this horrific oppression are the Pashtuns under the Pashtun Tahafuz Movement (abbreviated PTM), or the Pashtun Protection Movement. PTM is a social movement for Pashtun human rights based in Khyber Pakhtunkhwa and Balochistan, Pakistan. Started in the May 2018 for raising concerns over land mines installed in tribal areas of the Khyber Pakhtunkhwa, the movement soon turned a force countering Pakistani military’s offensive against the community.

The movement rose to prominence in January 2018 when it began a justice movement for Naqeebullah Mehsud, who was extrajudicialy killed in a fake encounter staged by the police officer Rao Anwar in Karachi. Mehsud’s death sparked national outrage in Pakistan and it soon became a metaphor for the historic subjugation and oppression of the residents of tribal areas and the way tens of lakhs have faced conflict and abuse.

What followed was a protest march starting from Dera Ismail Khan(KPK) in late January which ended in Islamabad in March, 2018 with thousands of Pashtuns staging a sit-in called “All Pashtun National Jirga” from 1 February outside the National Press Club. The main demands of PTM presented during the Pashtun Long March’s gatherings in 2018 included punishment of police officers involved in the alleged murder of Naqeebullah Mehsud, investigations regarding extrajudicial killings and disappearances of Pashtuns, removal of landmines in Pashtun tribal areas and stopping of torture and collective punishment against entire villages and tribes in the Pashtun tribal areas, among others.

Nonetheless rather than addressing the genuine grievances expressed by this growing movement, the Pakistani government chose to execute a nationwide crackdown of Pashtun voices. The Pakistani media also toeing the line of Pakistani military has virtually blacked out all the reportage regarding Pashtun resistance in the state. Many senior members and leaders of the PTM have been repeatedly arrested by the police forces. Moreover Pakistani establishment has also prevented the leaders of the PTM from entering parts of Pakistan where they wanted to stage protests; some members of the PTM were also barred from leaving the country.

Pakistan military has also come out openly against the Pashtuns and have been indulging in violent anti-Pashtun rhetoric to discredit the movement and provide cover to the extrajudicial killings and abduction of Pashtun leaders. In one public briefing, the military media spokesperson Asif Gafoor accused the PTM of working on “an anti-Pakistan agenda” with the help of foreign hostile governments signaling to India – a hand book tactic often used by the Pakistani military complex to discredit its critics.

However these efforts by the Pakistani establishment to suppress pro-Pashtuns protests have certainly backfired, the resentment of state sponsored harassment campaign against Pashtuns has further fueled these protests and the gatherings have been seeing a steady rise in participation. While the movement has been largely non-violent, fears of confrontations spiraling out of control given Pakistan’s strong armed tactics cannot be ruled out. For the PTM their motto “Ye jo dehshatgardi hai, iske peeche wardi hai” (The ones responsible for terrorism are the ones in uniform) surely speaks volumes about oppression and subjugation of Pashtuns and other tribals by the hands of Pakistani military establishment or terrorist groups operating in Pakistan.

Nonetheless for Pakistan this surely adds to the problem; while brute force is being used against separatist movements in Baluchistan, Pashtun movement, though not purely separatist yet, surely enjoys wider support not only among the tribals but also among the progressive class in Pakistan who have witnessed the fall of their nation due to similar subservice policies of the state.