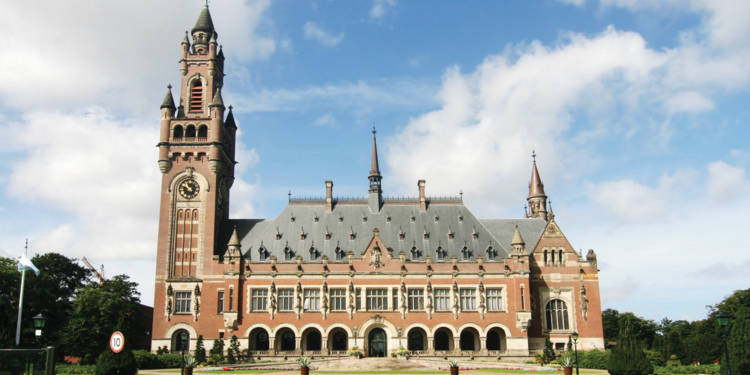 If there is one quality of Pakistan that countries and even individuals all over the world must appreciate and imbibe, it is their inability to give up even in some of the most dreadfully embarrassing situations. After India’s decision to abrogate Article 370 of the Constitution, Pakistan seems to be doing everything in its power to reverse the decision despite the global institutions and countries acknowledging that it was an internal move in coherence with the Constitution of India.

After the major fiasco in the United Nations Security Council wherein the terror country with its all weather ally, China was informed in so many words that the UNSC will not be interfering, Pakistan has now decided to approach the International Court of Justice (ICJ) over the Kashmir issue.

Pakistan Foreign Minister Shah Mahmood Qureshi said, “An in-principle decision has been taken to take the issue of Kashmir to the International Court of Justice. The decision was taken after considering all legal aspects.” On Pakistan’s ICJ move, he further added, “The case would centre on alleged human rights violations by India in Muslim-majority Kashmir, which both countries claim in full but rule in part.”

Determined though, it seems Pakistan is forgetting the most basic legal doctrine of ‘clean hands’. The doctrine which states, “equity must come with clean hands;” outlines that one whose own hands are dirty cannot approach the court to get justice.

The state of Jammu and Kashmir was acceded to India in the year 1947 when Maharaja Hari Singh signed the Instrument of Accession, which included the entire state. However, by deceit and force, Pakistan has latched itself onto a substantial portion of the Indian territory, namely, the areas of PoK and Gilgit-Baltistan.

What the regions witnessed thereafter was gross human rights injustice, persecution, forced displacement and demographic changes. Pakistan has treated the forcefully occupied part of the state as a piece of land, devoid of any people or human rights, as a prize won from India in a display of power.

Now, Pakistan has suddenly decided to sympathize with the plight of the Kashmiris after the abrogation of Article 370, worried that it would lead to a loss in the ethnicity of the residents in the state.

The terror country obviously seems to have a memory disorder, since they cannot remember that since the past 3 decades, the country has been purposefully attempting to change the demography of the occupied regions. Gilgit, Baltistan and PoK were Shia-dominated regions, which is exactly what Pakistan wanted to change. From 1970s, Pakistan encouraged the Sunnis to settle in the regions by offering them incentives such as homes and jobs. In effect, PoK and Gilgit are today dominated by Sunni Muslims. This has worked in Pakistan’s favour geo-politically, but the condition of the people in the regions remains as deplorable as ever.

This was successfully carried out due to Pakistan notifying a rule in 1974, which overrode the 1927 law promulgated by the Maharaja of Jammu and Kashmir that denied property ownership to outsiders. In layman’s terms, it was the same right that was ensured through Article 370 in Jammu and Kashmir, on whose abrogation Pakistan is suddenly much concerned about the ‘human rights’.

Moreover, the existence of Gilgit-Baltistan’s legislative assembly is mere eyewash and the reality seems to be something else entirely. The region is governed by the Ministry of Kashmir Affairs and Gilgit Baltistan in the government of Pakistan. The assembly has limited power to frame laws on limited subjects and the real power resides in a council headed by the prime minister of Pakistan.

Thus, in effect, neither are the regions a province of Pakistan, as the Pakistani constitution finds no mention of them, neither are they an independent entity, free to govern their own selves.

As is aptly put by the Asia director at Human Rights Watch, Brad Adams, “Although ‘azad’ means ‘free,’ the residents of Azad Kashmir are anything but free.”

Qureshi also stated that the case would centre around the human rights violations by India in Kashmir. He seems to forget that even though Pakistan tried its level best to suppress the voices and reports in the PoK region, many have surfaced out.

According to the Institute for Defence Studies and Analyses PoK Project Report in 2011, “PoK is fundamentally backward and comprises areas with little or nothing in terms of infrastructural development. The entire region presents a dismal picture of deprivation both in socio-economic and political terms.”

Moreover, the Human Rights Watch Report titled, “With Friends like these….Human Rights Violations in Azad Kashmir” elaborated on the deplorable state of civilians in the region. For a country which argues ‘self determination’ and ‘will of the majority’ by claiming the moral high ground by stating it does not ‘exercise formal sovereignty’ over PoK, and the territory is ‘self-governed’; Pakistan doesn’t shy from committing any atrocities on the civilians there. According to Brad Adams, “The Pakistani authorities govern Azad Kashmir with strict controls on basic freedoms.” There are routine reports on issues ranging from forced disappearances, torture, denial of rights, arbitrary arrests, political repression and electoral fraud and suppression of freedom of speech.

Since the past many decades, Pakistan has been successful at ensuring that the proponents of human rights organizations have largely ignored the atrocities in PoK committed by the Pakistani state. However, going to the ICJ with the Jammu and Kashmir case is going to change that. Not only will their blatant illegal annexure of the state be highlighted, but so will the atrocities which they commit in the state.

In the occasion of Pakistan moving the ICJ, India will definitely have the upper hand in the case. If Pakistan voluntarily chooses to lose another Rs 20 crores (legal fees for their unsuccessful Kulbhushan Jadhav case in ICJ), along with the meagre respect they have left; all while drawing attention to the atrocities committed in PoK, they are more than welcome to go ahead with the case.