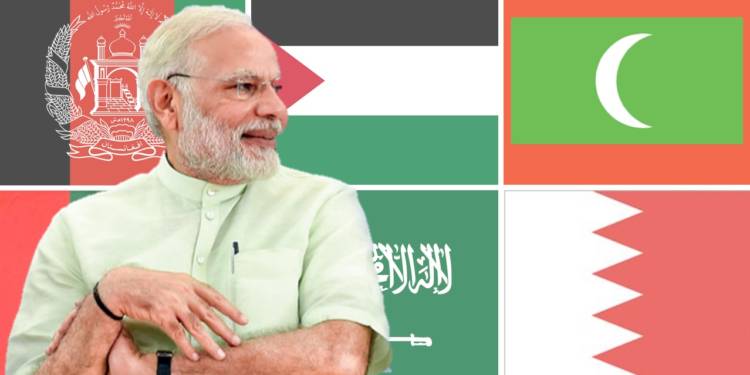 Prime Minister Narendra Modi was honored with “The King Hamad Order of the Renaissance” in Bahrain on Saturday as he held talks with King of Bahrain Hamad bin Isa Al Khalifa on various bilateral and regional issues on the first ever visit of an Indian Prime Minister to the gulf nation.

While receiving the award PM Modi said, “It is an honour for entire India. This is a symbol of the close and friendly relations between the Kingdom of Bahrain and India.”

On the same tour during his visit to the United Arab Emirates, PM Modi was also honored with Order of Zayed, United Arab Emirates highest civilian order. Earlier PM Modi had also received Maldives’ highest honour “Rule of Nishan Izzuddeen”, the Grand Collar of the State Palestine, Amir Abdulla Khan award of Afghanistan and King Abdulla Aziz Award of the Kingdom Saudi Arabia among a number of awards from other nations and international organizations.

While PM Modi has been successful in overhauling India’s image to that of a global contributor from a regional power, these specific awards and accolades surely entail special significance. Saudi Arabia, United Arab Emirates, Bahrain, Maldives, Afghanistan and Palestine, honoring PM Modi and in a sense our nation evidently indicates towards a seismic shift in outlook of Islamic nations towards India.

Foreign diplomatic relations, which are inherently slow paced, require constant struggle against the status quo, However, the pragmatic and proactive approach of PM Modi in this respect has yielded swift positive results for Indian diplomatic efforts. India’s friendly relations with West Asian Islamic nations is a striking example; while at the home turf PM Modi is portrayed as ‘anti-Muslim’ by a specific section of media, at the global stage, Islamic nations have showed their regard and respect for the Indian Prime Minister and India, by honoring him with the highest civilian awards.

What makes these honours even more intriguing is their timing; “The King Hamad Order of the Renaissance” of Bahrain and Order of Zayed of the UAE come at a time when Pakistan has been peeking at its anti-India rhetoric after India abrogated discriminatory provisions of the Article 370. While Pakistan has been trying to portray this issue as a religious struggle between Hindus and Muslims, Gulf Islamic nations by these awards have not only snubbed the terror infested nation but also rejected all the subversive theories around the anti-Muslim image of the current ruling dispensation in India.

Several officials have also indicated that “innovative foreign policy” of PM Modi has brought India’s relation with the Muslim world to an unprecedented favorable position.

“Prime Minister Modi’s personal diplomatic outreach has yielded great results for India as far as the Muslim world is concerned. It has got home substantial investment, led to a rise in haj quota and ensured the return of several prisoners in West Asia, united with their loved ones” an official added.

Nonetheless even after clear indications of the Islamic world rejecting Pakistani theory and standing strong with India and PM Modi, Pakistan is yet to come to terms with the reality that its ‘muslim ummah’ theory has been demolished which it has been using over the past few decades to perpetuate its covert military rule in the state.