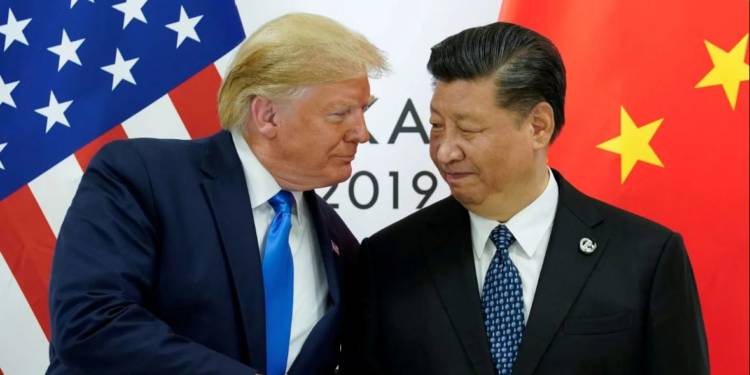 The ongoing ‘trade-war’ between the world’s two largest economies has seen an unprecedented escalation in the past week. It was in March last year when the United States implemented its first round of additional tariffs on $60 billion worth of Chinese goods. Donald Trump has now declared that the existing tariffs on $250 billion imports from China would rise from 25% to 30%, a slap of 5% on China. These new set of tariffs would be applicable from October 1st, the 70th anniversary of the founding of the People’s Republic of China. Furthermore, the planned 10% tariffs on $300 billion in Chinese goods will be taxed at 15% instead of the currently existing 10%.

This move by Trump has no doubt angered China with the nation saying a “bullying” Washington would eventually “eat its own bitter fruit”. A Chinese commerce ministry spokesman on Saturday said, “The Chinese side strongly urges the US side not to misjudge the situation, not to underestimate the determination of the Chinese people, and immediately stop its mistaken actions, otherwise all consequences will be borne by the US.”

Donald Trump is known to be a man who believes in maintaining distance from the biased and self-vested American media, as a result of which all important announcements are usually made by him directly on his Twitter feed. Similarly, Trump took to Twitter for announcing the fresh onslaught of increased tariffs on China. Before this announcement, China had imposed heightened tariffs on $75 billion of US imports, targeting politically sensitive products from American factories to farms. If this wasn’t enough, Trump also advised all American companies to shut their units in China and look for better alternatives. This move might just prove to be a blessing in disguise for India, if we play our cards well. What better an alternative for American companies to China than India? Many of these companies would be looking to set up bases in India under PM Modi’s flagship ‘Make in India’ program.

Many would think that Trump is going extremely hard on China in this ongoing trade war. However, closer study on the subject would reveal that China has been looting the world economies over a long period of time now. Many in the United States agree upon the fact that there has been a grave trade imbalance between the two countries, though little was done to address the issue. Donald Trump, during his presidential campaign had advocated higher tariffs on Chinese goods. Reviving manufacturing within the United States by companies which have bases outside has been Trump’s dream.

Another point of contention between the two countries has been that of Intellectual Property (IP) theft and espionage by China. Apparently, it is mandatory for foreign companies to engage in joint ventures with Chinese companies. This draconian policy gives Chinese companies illicit access to American technology and information. This issue has not only been raised by the US, but also by the European Union, which even filed a complaint with the WTO regarding the same.

China not only indulges in such activities of property theft, but also being the authoritative state that it is, prevents foreign direct investment into some business sectors unless they establish a joint venture with a Chinese company and the domestic company holds a majority share in the venture. This shows how China coerces foreign companies to fall in line while doing business there. With a powerful President at the helm in the United States, China has been put in a tight spot for its unethical practices over the years. The US looks at China as a potential threat, both economically as well as militarily.

Trump’s acts are obviously indicative of his “America First’ policy. Meanwhile, China claims that it is being ‘bullied’ by the US, which is quite a statement in itself. For a country like China, which loves messing with the territorial and economic sovereignty of other nations, to be put in a spot it currently is in, definitely looks good. Be it the South China Sea or be it its adventures in the Indian Ocean, China has never missed on an opportunity to destabilise and undermine India’s influence in the region.

The United States seems in no mood to let China off the hook this time. While it is at it, it will ensure that China’s long term plan of regional, and subsequent global domination is foiled. All we need to do is grab a bucket of popcorn now!