A tragic U Turn of a very poor nation 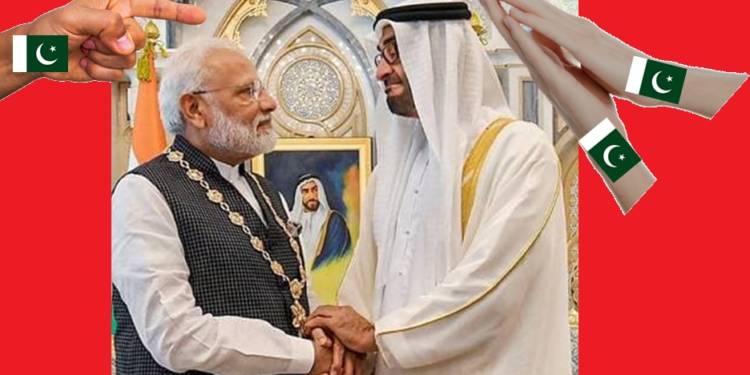 Pakistan seems to have fallen in a catch 22 situation after the UAE awarded PM Modi with the country’s highest civil honour, Order of Zayed. Intially, the Pakistanis felt a deep heartburn when they realized that it has been brutally snubbed over its fake yet vociferous allegations about India concerning Kashmir. The Pakistani citizens had a major meltdown and they tried trending #ShameOnUAE on twitter. Most of the tweets involved distasteful caricatures and bizarre allegations against India. Some of them even made communal remarks and tried to project the decision to award PM Modi as detrimental to Muslim unity. A major bulk of these tweets reek of sick Pakistani mentality.

Pakistan remained in the perturbed state for quite some time with Pakistan’s Senate Chairman Sadiq Sanjrani, cancelling his visit to the UAE, a day after PM Modi was conferred with the Order of Zayed, the UAE’s highest civilian award. As per Geo TV, Sanjrani was supposed to visit UAE from August 25 to 28 with a parliamentary delegation on the invitation of the UAE government. The channel stated that as per a statement from the Senate Secretariat, the Pakistan Senate Chairman cancelled his visit as Pakistan vehemently supports Kashmiri people. This was seen as an ultra aggressive move on the part of Pakistan. For a country, which is embroiled in a deep economic crisis, it was a remarkably bold move to take such a hard stance with a country like the UAE. Moreover, if Pakistan really wants to stay away from countries which have close relations with India, then it might have to isolate itself completely because India, being a regional superpower shares excellent relations with countries in almost every region of the globe.

Pakistan soon realised that its meltdown was unwarranted and protesting over the UAE’s decision to honour PM Modi with the highest civilian award might backfire. Pakistan literally displayed a bipolar disorder over its meltdown post PM Modi’s state visit to the UAE.

Pakistan Foreign Minister, Qureshi first praised the Pakistan’s Senate Chairman’s move of cancelling his UAE visit and immediately followed it up by saying that Pakistan cannot be angry at the UAE as the latter had paid Pakistan $2 billion last year and $ 3.2 billion deferred oil payment facility. He has thus made it clear that given the dire state Pakistan is in, it has no diplomatic standing or economic status which would warrant such extreme reactions. The beggar country does not really have the choice of making such over the top reactions.

Qureshi playing on both sides of the wicket and how.

Express Tribune, leading Pakistani daily, also carried out a story on its website mentioning how Pakistan had “quitely” lodged a protest with the UAE. However, Express Tribune has now “quitely” removed that story showing that Pakistan does not want to annoy the UAE. Pakistan’s economic woes have made it diplomatically weak, fragile and indecisive. The terrorist country has clearly lost sanity over the recent developments.

This story on Pakistan lodging protest with UAE for honouring Modi "quietly removed" from the Express Tribune website. pic.twitter.com/smIPP10E4q