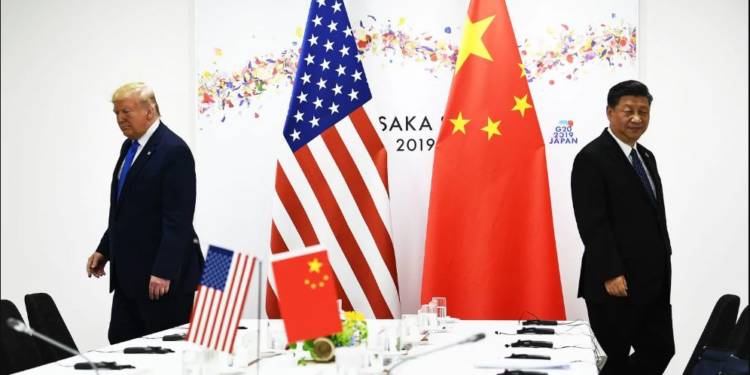 Even as a fresh set of US tariffs is going to kick in on Chinese goods from today, President of the United States on Friday said that 13 per cent of companies will leave China “in the fairly near future”. President Trump told the reporters at White House, “It’s a bad situation they (Chinese) have put themselves in. And I just saw — it came over the wires — that 13% of certain companies are going to be leaving China in the not-too-distant future. That’s a big thing.”

Responding to a question, Trump said, “Thirteen per cent of the companies will be leaving China in the fairly near future. And I’m not surprised to hear that. I think it’s going to be much higher. Because they cannot compete with the tariffs. They can’t compete.” Trump further added, “They’re on. We’ve taken in billions and billions of dollars from those tariffs. As it’s starting to come out, if you look at the Chinese government what they’ve done with tariffs is very interesting. They’ve devalued their currency so much, which hurts them ultimately. It costs them much more to buy things outside of China.”

Recently, TFIPOST had published an analysis report stating that the ongoing trade war between the US and China could trigger a new form of the cold war, a bipolar tech world with two sides of walled-off technology groupings. This trade war could actually turn out to be a great opportunity for India. The American and even European and Japanese companies will have to look for new sources and avenues in the backdrop of the trade war. They might also have to explore new markets given that these companies would no longer be welcomed in China. On the other hand, China will also have to look for options other than the US.

Now, this presents an unprecedentedly big opportunity for India to take over from China and act as the engine of global growth. For decades, India’s northern neighbour China, has been called the ‘world’s factory’. Many global firms set up their manufacturing units in the country owing to the availability of cheap labour and China’s pro-market economic policies. However, with the US imposing a fresh set of tariffs on Chinese goods, it’s advantage India.

In order to adjust with the new realities of global trade rules, global companies are looking for a new ‘world’s factory’. In the light of this development, Foxconn is moving its assembling process of iphone X in India to avoid the impact of ongoing US-China trade war. The company will invest 2.5 thousand crores to assemble the iPhone X series in Tamil Nadu. The move will create 25,000 jobs in the country and make India a manufacturing hub of smartphones across the segments. The next move of the company will be to make Amazon Echo speakers, displays, and printed circuit board (PCB) in India. With this big move, the trend that we are talking about has already started.

The Modi government is trying to encourage the companies to set up manufacturing base in India through various policies implemented under Make in India programme. The manufacturing giants like Foxconn have realized this opportunity; these companies are now shifting the manufacturing operations to India. “Until now, India has made for India,” but “Soon India will make for the world,” said Josh Fougler, who runs Foxconn’s operations in India.

Trump administration has launched a massive trade war and China can no longer risk relying heavily on the US to sustain the former’s export-based economy. Fortunately for India, this trade war has coincided with her rise as the fastest growing economy in the world. With its size and capabilities, the Indian economy is a prolific market for both the American and European companies on the hand and the Chinese companies on the other. In such a situation, India stands to gain big from the ongoing trade war. After all, no other economy is as close a substitute for the Chinese economy as the Indian economy. It seems that the trend TFIPOST had predicted in the analysis report published around a couple of months ago has already set in.