US flags out. US Anthem sung. In Hong Kong. That China claims as its own 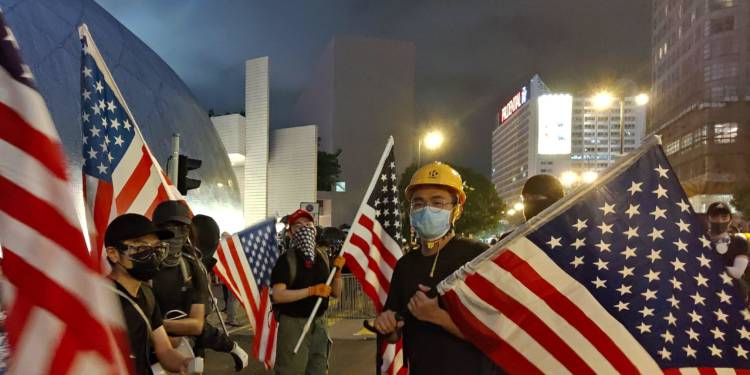 In what started off in Hong Kong as a protest movement against China’s rule to allow extraditions to the authoritarian mainland China, which later snowballed into a broader campaign calling for greater democracy, police accountability and an amnesty for those arrested, it seems that the Chinese Communist Party is still in stormy waters despite scrapping of hugely controversial Extradition bill.

The protesters who have taken to the streets for the past 14 weeks have shown no signs of abating, in fact they have turned to the US and Trump administration for intervention in the ongoing stand-off. Pro-democracy activists rallied outside the United States consulate in central Hong Kong on Sunday as they try to bring an international spotlight to the political crisis in the semi-autonomous Chinese territory. What began as peaceful demonstration was cut short in the late afternoon as hardliners started fires and began erecting barricades on some of the city’s most prestigious streets, including Chater Road, location of the Court of Final Appeal, Cenotaph, and the ultra-exclusive Hong Kong Club. 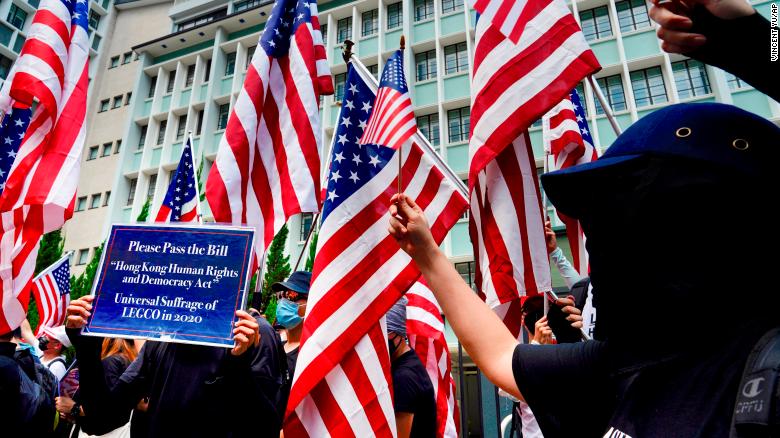 Previously President Trump had called for a peaceful resolution to the political crisis in Hong Kong and urged China against escalating with a violent crackdown. Trump has said if Beijing sends troops into Hong Kong, any talks with Washington will be shut down amid the already prevalent trade stand-off between the two countries. Whereas, China has alleged that the USA is backing protestors in the Asian financial hub which Washington has vehemently denied.

In a letter, which protesters planned to present to consulate officials, the group called for the passing of the proposed “Hong Kong Human Rights and Democracy Act 2019” by the US Congress. The protesters have appealed to President Trump to “stand with Hong Kong” and ensure Congress passes the bill which proposes sanctions and penalties on Hong Kong and China both. US House Speaker Nancy Pelosi said in a statement last week that Hong Kong residents deserve real autonomy and freedom from fear. She urged an end to police violence against protesters and said Congress looks forward to “swiftly advancing” the Hong Kong bill.

Some US lawmakers have been asking for greater US involvement in Hong Kong. Some have even demanded an official re-evaluation of Hong Kong’s “most-favored-nation” trade status with the United States.

The “most-favored-nation” is a special status that gives countries certain trade advantages, including lower tariffs on imported goods, according to the US government. US senators had introduced the “Hong Kong Human Rights and Democracy Act” in June, which requires an annual check that Hong Kong is autonomous enough “to justify special treatment.”
The protesters are now referring to this Act and calling on the US Congress to pass it to put additional pressure on the HK government and Beijing to accede to their demands.
The protesters carried a banner at the march which read, “President Trump, please liberate Hong Kong”. According to CNN, some marchers also sang the US national anthem as they moved towards the consulate.
30-year-old banker David Wong said, “We share the same US values of liberty and democracy.” He added, “USA is a country of democracy. Donald Trump is elected by his people. We want this.” 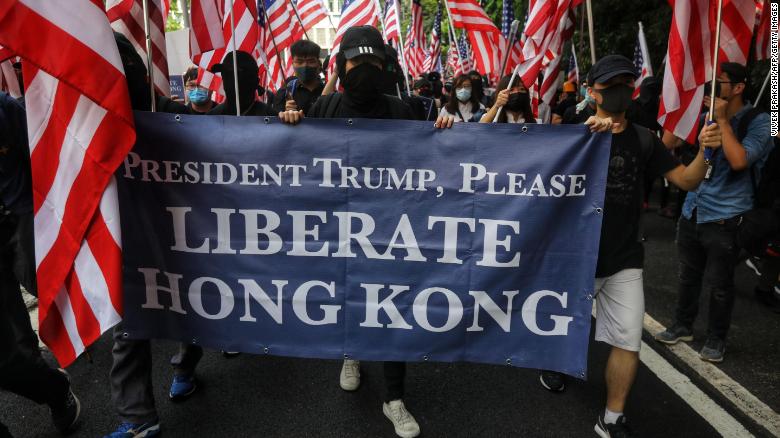 Currently, under the Hong Kong Policy Act, which was by US Congress in 1992 in the wake of Tiananmen Square crackdown, the US has to treat the former British colony as an entity separate from China.

Protesters are seeking permission for a large rally next Sunday and are also looking to get out huge crowds on 1 October. Almost from the beginning, protesters have sought to bring international attention to their cause. The G7 statement has already hit China like Thor’s Mjolnir, “The G7 reaffirms the existence and the importance of the 1984 Sino-British agreement on the former British colony and calls for avoiding violence.” read the joint statement of G7 leaders.

It is shocking how the human rights organisations​ around the world have not spoken about the police brutalities against the protesters. It seems that such liberal activists are keen on using Kashmir as a smokescreen to avoid mentioning the Chinese atrocities in the territory. It is befuddling and does not have any logical coherence as to why it has not found any prominence in the mainstream. Now the protesters are hoping that the US administration intervenes and free them from the clutches of the oppressive Chinese regime.