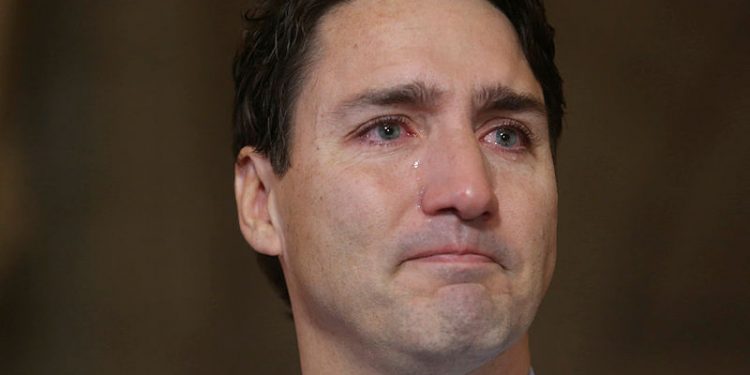 Canadian Prime Minister Justin Trudeau has long been heralded as a liberal hero with liberals from across the world swooning over him and wishing they had someone like Trudeau in their country. There were endless Buzzfeed and Scoopwhoop articles over how perfect Trudeau is ever since he assumed office in 2015 and now four years later, with the Canadian parliamentary elections next month, Trudeau is staring at an embarrassing defeat which will mark a remarkable fall from grace.

Justin Trudeau was elected amidst much fanfare as it was perceived that he stood as the defender of progressive values, a global leader who is open, tolerant, feminist, liberal and colourful and four years later, the only colourful things about Trudeau are his pair of socks. As Canada grows increasingly tired of his antics, his downfall started with his disastrous visit to India. Trudeau’s closeness to the Khalistani separatist groups was not missed by the Indian government and hence Trudeau received a royal snub from the Indian government upon his arrival in India.

It was customary in the Narendra Modi government that every head of state was royally received at the airport but for Trudeau, the government sent a junior minister to receive him and his entourage. The Prime Minister didn’t meet Trudeau till the 5th day of his visit and UP CM Yogi Adityanath didn’t even travel with Trudeau upon the latter’s visit to Taj Mahal where he was received by district officials. Justin Trudeau continued to make a laughing stock of himself with his unnecessary overdressing in Indian attire. His toxic love for Khalistani extremists is so profound that his delegation consisted of Jaspal Atwal – a convicted assassin and former Sikh terrorist who tried to assassinate the visiting Punjabi cabinet minister, Malkiat Singh Sidhu, on Vancouver Island in 1987.

Trudeau also attended a Khalsa Day parade in Toronto in 2017, where he was photographed in front of the Khalistan separatist flag. Trudeau’s India tour further gave proof to the claims that Trudeau had little or no diplomatic awareness as his visit to India involved minimal official business and was reduced to a photo-op with excessive Indian clothing and bringing a terrorist and convicted assassin as a part of his official delegation. Only Trudeau could have managed to lead such a disastrous visit which was widely lamented in Canada and even Trudeau admitted that his visit to India was disastrous and called it a “Trip to End All Trips.”

His visit to India was just a sign of things to come as the shine began to wear off from Trudeau who used to be the darling of international media. The liberal angel is now mired in a corruption scandal that has severely dented his brand image.

Trudeau received many plaudits when he inducted Jody Wilson-Raybould was Minister of Justice and Attorney General of Canada, thus becoming the first indigenous justice minister of Canada. She was recently demoted to the post of minister of Veteran Affairs which she later quit as she was not ready to mend her ways with SNC-Lavalin Group. The company allegedly bribed the son of the erstwhile dictator of Libya Muammar Al Gaddafi to secure contracts in Libya. The company was facing grave charges and has a history of indulging in corrupt practices in various countries given its presence in over 150 countries.

In 2013, the World Bank debarred the company and more than 100 of its affiliates for 10 years, single-handedly putting Canada at the top of the bank’s corruption list. The company lobbied with the Canadian government to escape trial by settling the case by paying a heavy fine. The Deferred Prosecution Agreement would permit SNC-Lavalin to avoid criminal prosecution, allowing it to continue to bid for domestic government contracts. This prompted Justin Trudeau and his trusted aids to pressurise Raybould to not let the case go to trial as it would effectively debar the company from winning domestic contracts for the next 10 years. SNC-Lavalin Group threatened to leave Montreal and shift its base to London if Raybould refused to budge which ultimately led to her demotion and her subsequent resignation. She has gone on record and listed 10 conversations where Trudeau and his aids can be seen pressurising her. Trudeau came up with a weak defence by claiming, “Canadians expect their government to look for ways to protect jobs, to grow the economy, and that’s exactly what we’ve done every step of the way … in a way that has respected our laws and respects the independence of the judiciary.” The Canadian government’s official ethics watchdog has officially censured Trudeau – a sign of growing dismay with his administration in Canada.

During his disastrous tenure, he continued to mingle with terrorists and extremists under the garb of ‘liberal’ values. Trudeau’s incompetence was again at the display when he told a wounded war hero that Canadian veterans were asking for more money than his government was willing to give amidst a standoff between his government and veteran’s group over pension payment. The same Trudeau and his government parted with a whopping $10.5 million which was awarded to convicted Al-Qaeda terrorist Omar Khadr without even going to court. While his hobnobbing with Khalistani extremists have been widely documented, he took minority appeasement to the next level when he decided to welcome back members of ISIS into Canada. Such a move led to many questions being raised and Trudeau foolishly equated the returning ISIS with Europeans who fled Nazi Germany during World War II.

Justin Trudeau, a second-generation political dynast has proved that unlike his father, he has no vision for Canada and acted as a performing artist rather than a Prime Minister as his threadbare knowledge of economy, foreign affairs and defence was time and again exposed. If there was a line to sum up Trudeau’s tenure, it would be ‘Style without Substance’; and just being ‘cute’ and a darling of liberal media doesn’t win you elections, standing right on your principles do and it is safe to say that Trudeau has failed his party and his ardent supporters with his ill-conceived moves as he marks his last month as Canada’s Prime Minister.