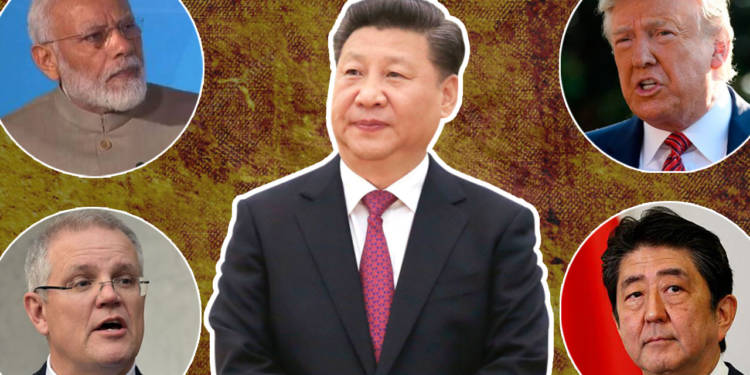 Prime Minister Modi’s ‘Howdy, Modi!’ event was a rousing success and the Trump-Modi bonhomie was for the world to see. POTUS Trump went the extra mile and dropped by at the UN Headquarters just to watch Prime Minister Modi speak at the Climate Summit. Perhaps hidden from all the glamour, PM Modi quietly exercised India’s growing diplomatic clout and set the stage for an Asian NATO minus China, which is sure to be a cause of concern for the Chinese.

In what can be seen as an attempt to disrupt the status quo officials from India, Japan, Australia and the US met on the sidelines of the East Asia Summit in Manila in 2017, as the quadrilateral attempted to start a security dialogue as they collectively attempted to form an alliance as they intended to push back the revanchist China.

The ‘Quad’ is not only a formulation of strategic deterrence but a mechanism to provide more and better options to regional powers. It is important to note that the four-way dialogue resumed in 2017 after 10 years it was initially proposed. The then UPA government buckled under pressure as it strived to stay within the good books of China. The Quad met a premature death as India then subsequently kept Japan out of the annual naval exercise with the US.

However, things changed after the Narendra Modi government took over. The Modi government did extend an olive branch to China but increasingly grew tired of its theatrics and its tacit support to Pakistan and Pakistan backed terrorists like Masoor Azhar. While China thought they could continue to bully India, it was shocked to see India’s reaction when it attempted to trespass at Doklam. The Narendra Modi government wasn’t afraid to take China head on should the revanchist state not mend its ways. The 2017 Manila Summit was just the start and Prime Minister Modi has stepped up the efforts of formulating the Quad as during his visit the talks of forming the four nation alliance picked up pace as the talks have been now happening at the ministerial levels for the first time ever in New York. Foreign Minister Marise Payne, Indian Foreign Minister Subrahmanyam Jaishankar, Japanese Foreign Minister Toshimitsu Motegi and US Secretary of State Mike Pompeo will meet on the sidelines of the United Nations Climate Summit which is sure to make the Chinese jittery.

China has been cornered by the Trump-Modi combo as it gets increasingly wary of the Trump administration and is now forced to think twice before doing any misadventure in South China Sea as international pressure ramps up on China. India has decided to hit China on its jugular vein: the China Pakistan Economic Corridor(CPEC) as China has already invested billions of dollars with little investment and India has sent a strong message to China with its decision to revoke Article 370 as the CPEC passes through PoK which has been illegally occupied by Pakistan and India is within its right to take back PoK which will put the Chinese investments at risk as the tensions intensify in Pakistan occupied Kashmir.

China knows it can’t afford any misadventures with India as it will end up costing it dear as the former has invested a lot in the China Pakistan Economic Corridor(CPEC) which passes through PoK, much to the dismay of India as PoK is illegally been occupied by Pakistan. For China, CPEC is the link between Western China, the Middle East, and Africa, where it has strategic interests and has prompted the nation to invest $46 billion with more investment in the pipeline. CPEC is currently struggling as it faces backlash from the local Baloch population who continue to side with India. The Gwadar port was supposed to be the crown jewel of CPEC which is struggling and not delivering expected returns as China’s COSCO Shipping Lines has moved to terminate its container liner services between Gwadar and Karachi due to the poor pace of construction of Gwadar Free Trade Zone. This has been attributed to Pakistan administration’s inept and due to India’s sustained efforts, so far CPEC activity in Pakistan occupied Kashmir has been limited to reconstruction and maintenance of the Karakoram Highway, which was built in the 60s.

China knows it fully well that further spooking India will result in India striking at PoK as evident from the statements of Rajnath Singh and S Jaishankar as India looks to take back its PoK. China simply cannot afford any unrest in PoK due to its humongous investments and its economy which continues to show a downward spiral. The Indian government’s move to make Ladakh a separate Union Territory with no legislature is likely to keep China on its toes as the Buddhist population will be omnipresent along the Tibetan border as India has often offered shelter to the Buddhists from along the border who continue to lead the voices for the independence of Tibet.

China often used to be the aggressor and again tried to spook India during the Doklam standoff. It was completely caught off-guard with India’s strong posturing on Doklam prompting China to step back. The Narendra Modi government over the years has continued to show China its place and Quad alliance will result in India gaining a huge strategic advantage over China and effectively neutralise any future Chinese misadventure.