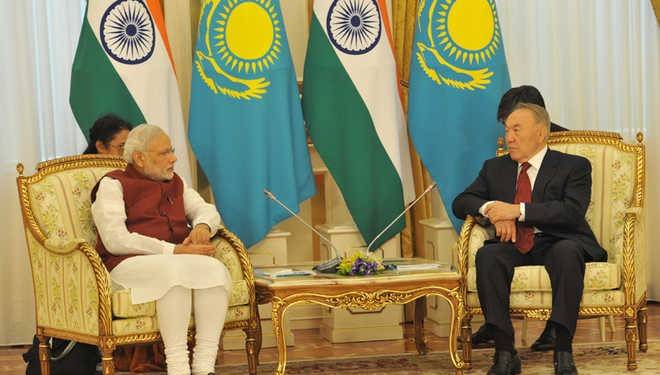 China’s relations with Kazakhstan go back in history as Chinese President Xi Jinping wooing the Central Asian country by unveiling the Belt and Road Initiative in China. Expectedly, China announced a slew of investments in Kazakhstan as it looked to exploit the Uranium-rich country as the country would fall into the Chinese debt-trap. As Kazakhstan President Kassym-Jomart Tokayev announced an easing of the restrictive legislation on the expression of dissent and public demonstrations, there is a palpable anti-Chinese sentiment in the country that too at a time when India-Kazakhstan trade is at an all-time high.

Kazakhstan has seen a rise of protests against the perceived Chinese economic invasion of the country. The wave of protests started from the oil mining town of Zhanaozen in the first week of September and quickly spread in the cities of Aqtobe, Almaty, Shymkent and the capital city of Nur-Sultan. The numbers continue to rise as recently, 57 people were detained in Almaty and Nur-Sultan as the country sees a sudden uprising against Chinese investments and loans at a time when the country is slated to receive Chinese assistance for the construction of 50 new industrial facilities soon enough.

Kazakhstan until now was an autocratic state until Tokayev eased the restrictions on dissent and public demonstrations and the protests against China have been on an upswing since 2016 especially against the country’s Land Code that enabled government sales or leases of agricultural land to foreigners/Chinese for 25 years. While Islamic nations like Pakistan have turned a blind eye to China’s ethnic cleansing in Xinjiang by their treatment of Uyghurs, the protests in Kazakhstan have been further motivated by the horrendous treatment of Uyghurs by the Chinese administration as Kazakhstan has more than 400,000 Uyghurs who continue to live in exile.

China saw an opportunity post the collapse of the Soviet Union as it moved to exploit Kazakhstan to pursue its goals of economic dominance as China has heavily invested in Kazakhstan’s hydrocarbon sector, especially in oil and gas. The China-Central Asia gas pipeline–connecting Turkmenistan with China–delivered 23 billion cubic meters of natural gas to Beijing in the first half of 2019. China also received 5.9 million tonnes of crude oil during the same period from the China-Kazakhstan oil pipeline. As more than one million Muslims – including Uyghurs and Kazakhs – have been sent to “re-education camps” in Xinjiang, the Kazakhstan government finds itself in a tough corner as it faces an exasperated population who are worried about the fate of their relatives in Xinjiang and China who continues to remain strategically important for the country as protest intensifies over the decision to allow the Chinese to set up 55 factories that will further deepen Kazakhstan’s economic dependence on China and see a spike in Chinese settlements rather than creation of local jobs.

Back in India, it had become a norm for the opposition to criticise Prime Minister Modi’s foreign tours but the opposition completely missed Modi’s vision. Ever since the Modi government assumed power, India-Kazakhstan relations have skyrocketed as India seeks to engage the strategically important Central Asian country. India’s rightful entry into the Nuclear Suppliers Group (NSG) has been consistently blocked by China’s insistence to include Pakistan into the coveted group. Kazakhstan is the current chair of NSG and is assisting India to obtain membership of the NSG.

Kazakhstan is one of the major sources of uranium for India after Canada and Australia and Kazakhstan is the main trading partner of India as far as Central Asia is concerned so much so that the Kazakh-Indian trade exceeds India’s combined trade with other countries in Central Asia. The trade turnover between the countries reached $1.2 billion in 2018 (in 2015, the trade turnover amounted to $461.6 million). In the first three months of 2019, bilateral trade between Kazakhstan and India amounted to $293.1 million, which is 35.9% more than in the same period last year. The bilateral trade this year so far has already touched $1.5 billion. The mutual trips of the citizens between the two countries have also intensified in another sign of the deep ties shared by the countries as in 2018, Kazakhstan granted 25,000 visas to Indian citizens up from 6,000 visas it granted in 2014.

In a significant development, the two nations recently embarked on a joint 12-day joint military exercise with a focus on counter-terrorism operations in mountainous terrain. The yearly exercise saw around 60 soldiers from both Indian and Kazakhstan would share their experiences of counter-terrorism operations during the exercise. Incidentally, Kazakhstan’s first participation in a UN peacekeeping mission was deployed in 2018 to Lebanon as part of an Indian battalion.

The rising anti-Chinese sentiment in Kazakhstan presents a great opportunity for India and it must move swiftly to ensure that Kazakhstan doesn’t become the latest prey of the Chinese debt trap.