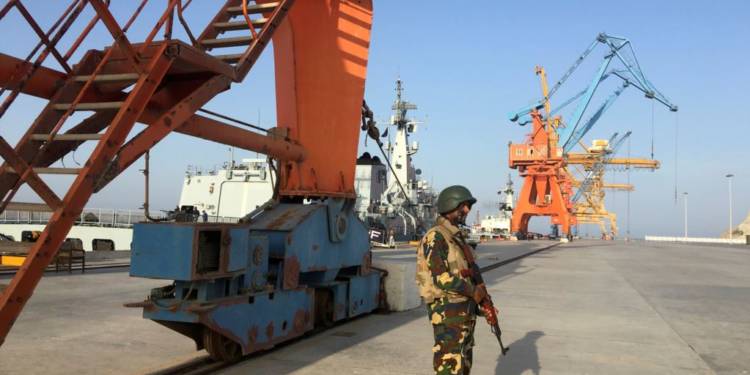 In recent developments coming from Pakistan occupied Balochistan, Pakistani military establishment is in the process of raising a division headquarters in Gwadar region of Balochistan. According to a report in ThePrint,  Pakistan’s plans to raise a division of 44 Light Infantry in Balochistan’s Gwadar is aimed at improving co-ordination of security initiatives and protect Beijing’s $60 billion China-Pakistan Economic Corridor (CPEC).

The China-Pakistan Economic Corridor (CPEC), which runs through the resource rich region of Balochistan has been an issue of contention between the local Baloch population and the Pakistani military establishment. Several reports of gross human rights violations by Pakistani military in the region have also surfaced leading to formation of armed Baluch groups taking on the occupying Pakistani forces in the region. Several incidents of these Baluch groups targeting CPEC infrastructure and officials from Pakistan and China, which is working hand in glove with Pakistan towards exploitation of the resource rich region have also surfaced.

However, for Pakistan this move is sure to back fire, with popular local support for these Baloch freedom groups and critical knowledge of the local geography, Pakistan has essentially walked into a trap. Baloch Liberation Army (BLA), one of the major proponents of an independent Balochistan has been carrying out a series of attacks on Pakistani and Chinese assets in the region. The most recent of the major attack in a luxurious hotel in the heart of Gwadar when several gunmen stormed the luxury Pearl Continental hotel in early May, the Baloch fighters were killed, but only after killing five people inside the hotel and a soldier.

Earlier in another offensive against CPEC, a convoy of 22 vehicles comprising Chinese engineers employed in the China Pakistan Economic Corridor (CPEC) was targeted near Hamdard University in Karachi city, resulting in a number of casualties.

After the attack, Jeeyand Baloch, a spokesperson for BLA in a statement had noted, “This attack is the continuity of the BLA’s policy of not allowing any force including China, to plunder the Baloch wealth in Balochistan. Our fighters had carried out deadly attacks on Chinese interests and engineers in the past and series of such attacks will continue with intensification until China terminates the nexus with Pakistan, regarding Baloch land.”

In November 2018 three heavily armed freedom fighters from the Baloch Liberation Army (BLA) had also targeted the Chinese consulate in Karachi. Two police officers and two visa applicants were killed. The Chinese officials inside the consulate remained safe, while the Baloch fighters  were killed in retaliatory firing.

Baloch nationalists have been critical of the CPEC from its initial phases and have been running massive campaigns against the Chinese-Pakistani nexus in the region. Baloch fighters have also been making use of social media to denouncing Chinese and Pakistani interference in the region and vowing to carry out attacks against CPEC projects. Several Baloch leaders have claimed that CPEC is not only a threat to Baloch identity but has also led to difficult living conditions for the Balochs. Attacks by Baloch fighters on CPEC have been on the rising trend over the past few years and in a bid to check the Baloch freedom movement and the attacks on the CPEC, Pak Army has formulated this new plan. It is perhaps what the Balochs have been hoping for.

With the Pakistani military moving directly into the heart of Balochistan, they are sure to face an higher intensity of Baloch resistance in the region. This move may check a few attacks on the CPEC installations, but is sure to increase the Pak Army casualties. Pakistan has thus fallen right into the trap set up by the Balochs.