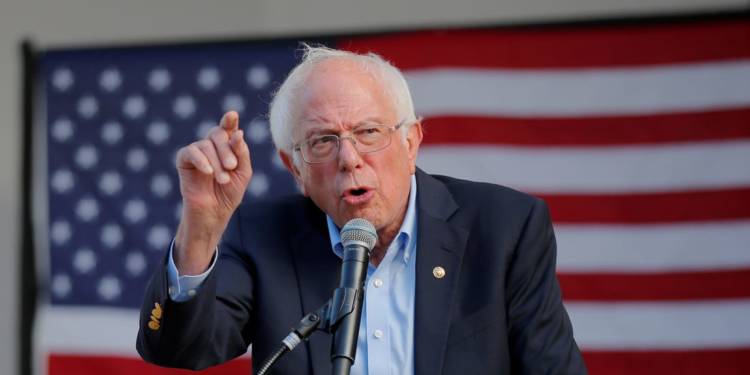 The US Presidential elections have effectively become a race between President Trump and the far-left as the Democrats take a definitive tilt towards communist policies. Democrat hopeful Bernie Sanders who believes in giving everything for free and is a staunch Socialist has now come up with a dangerous immigration policy if he is elected the President. Bernie’s immigration policy if implemented will effectively make the USA a dumping ground for the world.

Bernie Sanders has unveiled the slogan for his 2020 campaign, “A welcoming America for all” which would create a “swift, fair pathway to citizenship”, decriminalise immigration, demilitarise the US’ southern border with Mexico and strive to protect and strengthen the labour rights of immigrants in the country. Sanders plans to reverse Trump’s conservative immigration policy as Sanders would use the executive authority that comes with the office of president to reverse Trump’s actions on immigration that have caused “harm”. Sanders who had previously lauded the socialist model of Venezuela is now pushing to grant Temporary Protected Status (TPS) to the Venezuelans who have fled their country. He also plans to ensure that asylum seekers can file their requests in the United States, and put an end to family detention and separation, get rid of a ban on travellers coming from Muslim countries and stop the construction of the border wall with Mexico.

The issue of immigration is a personal issue for Bernie as his father came to the US at the age of 17 and Bernie with his immigration policy has laid bare his socialist and communist ideologies. The biggest issue with his policy is his pledge to restructure the Department of Homeland Security and begin treating immigration outside of national security which can set a dangerous precedent.

Bernie with his immigration policy is effectively trying to alter America’s demography. He wants the USA to be run over by immigrants which are the biggest vote banks of the Democrats. While Bernie’s counterparts like Joe Biden have taken a moderate stand on the issue, Bernie’s radical stand smacks of desperation to defeat Trump through illegal immigrants. The border state of Texas is a Republican stronghold which the Democrats cannot break and hence they are proposing open borders with Mexico which will see states like Arizona, Texas and Florida being flooded with Mexicans and in the absence of a Homeland Security, the states will face a threat of drug cartels. Like UP which is considered as the gateway to Delhi in Indian politics, Florida is considered to be the gateway to Washington and Bernie’s plan would effectively alter the demography of Texas, Arizona and Florida as the states would switch to blue thus preventing the Republicans to ever come to power again.

Bernie Sanders also wants to provide a “pathway to citizenship” via Congress for all illegal immigrants living in America — which he says is currently around 11 million — and would ensure that “old or low-level contacts with the criminal justice system” do not prevent illegal immigrants from walking along that path and as the President, Sanders would also decriminalize illegal border crossings, making it a civil violation. In yet another worrying development, Sanders has pledged to create a program to “welcome migrants displaced by climate change” and push to accept a minimum of 50,000 “climate migrants” in his first year in office. This will effectively mean an America which is no more for Americans as Sanders will also abolish measures such as DNA testing and facial recognition technology for immigration and border enforcement.

Of course, Sanders simply couldn’t have resisted himself from dolling out yet another set of freebies as he promised that both his “Medicare-for-all” and “College-for-all” plans would be available regardless of immigration status. He also wants to include free universal school meals — breakfast, lunch, dinner (and snacks) — regardless of immigration status. The US currently has more than 40 million people living in the U.S. were born in another country, accounting for about one-fifth of the world’s migrants in 2017 and about 10.5 million (23%) of them are unauthorised immigrants and it remains to be seen how would Sanders pride free medicare and college for all immigrants without running the American economy to the ground.

We have already seen what had happened to Europe as the continent witnesses a spurt in immigrants which has also seen a rise of crimes, demographic change and has a devastating effect on genuine citizens and ethnic communities which also prompted French PM Macron to backtrack from his earlier stance as he claimed that France cannot host everyone.