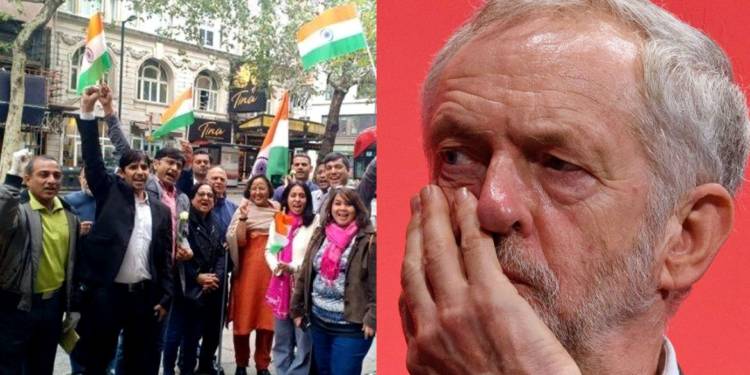 The United Kingdom is heading for a yet another General Election as the nation has shot itself in the foot by voting for Brexit. The Conservatives led by Boris Johnson have been unable to deliver Brexit and the UK economy is in a royal mess. Usually, one would expect the opposition Labour Party to have an upper hand as the Conservatives lead the country into a third General Election in a span of five years. Despite the Conservatives’ failure to deliver Brexit, they are expected to win the elections as the Labour-led Jeremy Corbyn is in complete disarray. Corbyn who is often the subject of ridicule in the UK, took a pro-Pakistan stand when India revoked Article 370 and the Labour Party blindly followed their leader.

Now, with elections on the head, the Labour Party has made a U-turn as it now maintains that the Kashmir issue must be solved bilaterally between India and Pakistan.

Labour Party has stepped in to counter its perceived anti-India stance to urge that the Kashmir issue not be allowed to divide communities in the UK in the lead up to the December 12 general election. Party Chairman Ian Lavery has said that Kashmir is a bilateral issue and Labour party will not interfere as he admits that the resolution passed on Kashmir offended India and British Indians. The letter notes: “Labour is opposed to external interference in the political affairs of any other country. As an international party, our concern is to ensure respect for the human rights of all people in the world, regardless of where they live.”

The letter further states: “We recognise that the language used in the emergency motion has provoked offence in some sections of the Indian diaspora, and in India itself. We are adamant that the deeply felt and genuinely held differences on the issue of Kashmir must not be allowed to divide communities against each other here in the UK. The Labour Party will not adopt any anti-India or anti-Pakistan position over Kashmir.”

The British Indians are a huge constituency for the Labour party as they have traditionally voted Labour. The one million-odd British Indians represent an important constituency that both the Conservatives and the Labour are trying to woo. The British Indians have grown wary of the Labour ever since the party passed a motion slamming India over Kashmir as Corbyn acted like as if he was a puppet of Imran Khan. Corbyn recently stirred another controversy when he met the Indian Overseas Congress and tweeted: “A very productive meeting with UK representatives from the Indian Congress Party where we discussed the human rights situation in Kashmir. There must be de-escalation and an end to the cycle of violence and fear which has plagued the region for so long.” No one was surprised as the Indian National Congress yet again committed an act which was against India’s interests but Corbyn surprised many as he sought to alienate one of his biggest constituency.

A very productive meeting with UK representatives from the Indian Congress Party where we discussed the human rights situation in Kashmir.

There must be a de-escalation and an end to the cycle of violence and fear which has plagued the region for so long. pic.twitter.com/wn8DXLohJT

The Conservatives, on the other hand, have pledged their support to India with MP Bob Blackman leading the charge against the pro-Pakistan voices in the British Parliament. The Labour seems bereft of any ideas as it even refused to condemn the Pakistan sponsored attacks at the Indian High Commission in London. However, it seems that better sense has finally prevailed in the Labour party as it disowned the comment of its leader as it realises that the British Indian voters may switch to the Conservatives, Labour has come out with this latest statement.