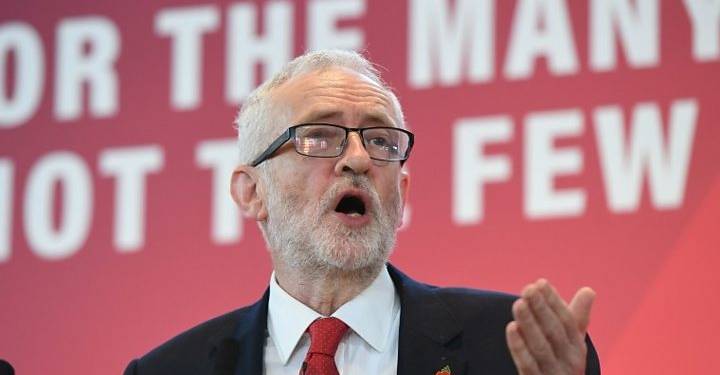 Amidst his plummeting popularity, the UK Labour Party leader, Jemery Corbyn presented the party’s election manifesto on Thursday. The manifesto promises ‘radical’ socialist measures such as better public sector pay rises, higher taxes on companies and a sweeping nationalisation of infrastructure. Announcing the radical measures on the behalf of Labour Party, Corbyn has made bizarre promises such as free broadband for all, state takeover of major sectors such as rail, water and mail delivery services. Corbyn, the main opposition leader of UK also said, “We will give Britain a pay rise starting with a real living wage of at least 10 pounds (€11.68/$12.95) an hour.” The Labour Party leader ha also proposed higher public spending which would rise by 83 billion pounds by 2023-24. The massive hike in public spending has been pledged to be covered by an increase in taxes on businesses.

Corbyn’s socialist utterances interestingly coincided with a Ipsos MORI survey, commissioned by the Evening Post, which has shown that the UK Prime Minister Boris Johnson’s Conservatives enjoy a decisive 16 per cent lead over the Labour Party. The lead for Conservatives has gone up further by three percentage points to 44 per cent over the last week, whereas the Labour Party stands at 28 per cent. Therefore, opinion polls show that the Labour Party is at a clear disadvantage with respect to the country’s December 12 elections.

Corbyn’s ‘radical’ socialist ambitions are bound to invite harsh criticism. The Conservatives have already been critical of the Labour Party over reckless public spending and promoting outmoded socialist ideas. Corbyn’s pledge to nationalise broadband has been labelled as a “crazed Communist scheme” by UK PM Boris Johnson. Paul Johnson, Director of the Institute for Fiscal Studies independent think-tank said, “It’s impossible to understate just how extraordinary this manifesto is in terms of the sheer scale of money being spent and raised through taxation.”

Corbyn has unveiled his populist, socialist manifesto replete with radical measures at a time when his popularity is constantly dipping on account of his relentless opposition to the Brexit deals put forth by the former UK Prime Minister, Theresa May.

He has remained obstructive in the Parliament especially with regard to the Brexit agreements. His desperate bida to rally the opposition parties into blocking the no deal Brexit agreement have further exposed his obstructionist brand of politics. As Britain goes to polls, PM Boris Johnson’s promise to deliver Brexit within months and a “dynamic market economy” seems to be resonating with the voters. It is in this background that the Labour Party leader has unveiled a populist manifesto based on ideas of ‘radical’ socialism.

Corbyn hopes that the radical manifesto would help him level out criticsm that he has been facing on his untenable Brexit stance. He has promised that he will get the Brexit “sorted” within six months and put a new exit deal to referendum as a means of bringing the country together. Even some Labour Party leaders say that his stance lacks the clarity offered by Johnson’s promise to get “get Brexit done”.

Corbyn has described Labour Party manifesto as the most “radical and ambitious plan” in decades. He couldn’t have been more correct with this. The fact remains that Britain is facing such an ill-conceived socialist manifesto for the first time after Labour’s socialist manifesto in 1983, that was later described as “the longest suicide note in history” by a then Labour lawmaker. Corbyn has however been cautious in his approach to avoid comparisons and has rejected the idea that Labour Party’s manifesto is harping Britain back to the 1970s.

The ‘radical’ socialist policies promised by the Labour manifesto could spell disaster for a country like Britain. The manifesto has corroborated that Corbyn is not going to get rid of his ‘communist inclinations’ and with this the Labour Party is in all probability set for a further descent in popularity. This manifesto also makes it clear that the Labour Party is not the party of Tony Blair any longer. Tony Blair had more Centre Right policies and had continued the neoliberal economic agenda.

Labour Party today has fallen to populsim and ‘radical’ socialist ideas. The manner in which it has pandered to Islamists, which was revealed by the manner in which it readmitted an MP having ties with the Muslim Brotherhood is yet another cause fir its decline. Now, the party seems all set to take another plunge in terms of popularity with its disastrous election manifesto.

India didn’t waste even a day in mending diplomatic ties with Sri Lanka. And the result is already here