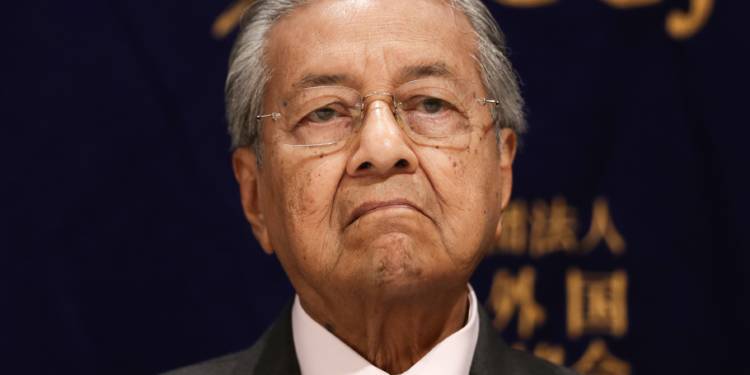 Malaysian Prime Minister Mahathir Mohamad who has drawn a lot of flak in the recent past following his unwarranted remarks after abrogation of Article 370 by India, has once again hogged limelight for pushing his anti-India agenda. Speaking about the CAA, the 94-year old has said, “I am sorry to see that India, which claims to be a secular state now is taking action to deprive some Muslims of their citizenship.” He also questioned the “necessity” of the recent changes to India’s citizenship law. Mahathir added, “People are dying because of this law. Why is there a necessity to do this when all the while, for 70 years, they have lived together as citizens without any problem?”

The Malaysian Prime Minister’s remarks are grossly misleading and far from truth. It shows the level of Malaysian Prime Minister’s ignorance about the sensitive issue. He has clearly failed to understand the Amendment legislation which does not deprive anyone of citizenship but only creates a simpler process for granting citizenship to persecuted minorities in the Islamic States of Afghanistan, Bangladesh and Pakistan. As such only a special right has been created and no changes have been brought about in the substantive provisions of India’s citizenship regime.

Now, Mahathir seems to have put himself in a spot of bother by showing unnecessary hostility, and interfering in India’s internal affairs without any provocation from New Delhi. India has strongly rejected his remarks about the CAA, dismissing them as “factually inaccurate”. The Ministry of External Affairs has set the record straight and stated, “According to media reports, the Prime Minister of Malaysia has yet again remarked on a matter that is entirely internal to India. The Citizenship Amendment Act provides for citizenship through naturalisation to be fast-tracked for non-citizens who are persecuted minorities from three countries.” The statement added, “The Act does not impact in any manner on the status of any citizen of India, or deprive any Indian of any faith of her or his citizenship.” The Ministry of External Affairs has also issued a stern warning to Malaysia over Mahathir’s unwarranted remarks, by stating, “…the Prime Minister of Malaysia’s comment is factually inaccurate. We call upon Malaysia to refrain from commenting on internal developments in India, especially without a right understanding of the facts.”

In fact, Mahathir is facing heat not only from India, but also within Malaysia. P Ramasamy, Deputy Chief Minister II of Penang and leader of the Democratic Action Party (DAP) which is a partner in the ruling coalition government in Malaysia, has also expressly said that Mahathir has got it wrong on the CAA just like the Kashmir matter by saying that India had “invaded and occupied” the Muslim dominated province. Ramasamy has also said, “The new amendment to India’s citizenship law is not about depriving Muslims of their citizenship. Far from it. In fact, the new law has nothing to do with Muslims in India.” Therefore, the nefarious agenda that the 94-year old Malaysian Prime Minister was trying to pursue has been debunked by his own coalition partner himself.

This is not the first time that Mahathir’s unwarranted and distasteful remarks about India’s internal affairs have sparked off diplomatic tensions between the two Asian countries. After India’s August 5 move of revoking special status of the erstwhile state of Jammu & Kashmir, and bifurcating the state into two Union Territories of Ladakh and Jammu & Kashmir, the Malaysian Prime Minister had gone on to accuse India of “invading and occupying” Jammu and Kashmir, during his speech at the United Nations General Assembly. His statement had caught many by surprise as he sought to undo whatever was achieved between India and Malaysia in the past six decades.

Mahathir however does not seem to have learned any lessons from his Kashmir blunder. He seems unable to get rid of the temptation to poke his nose in India’s affairs. This has actually led to the Ministry of External Affairs censuring his remarks and also issuing a stern warning to Malaysia. If Mahathir does not desist from making such unwarranted remarks about India’s internal affairs, then Malaysia could be staring at some real trouble as far as its diplomatic ties with India are concerned.