Even cured patients are becoming transmitters of the disease 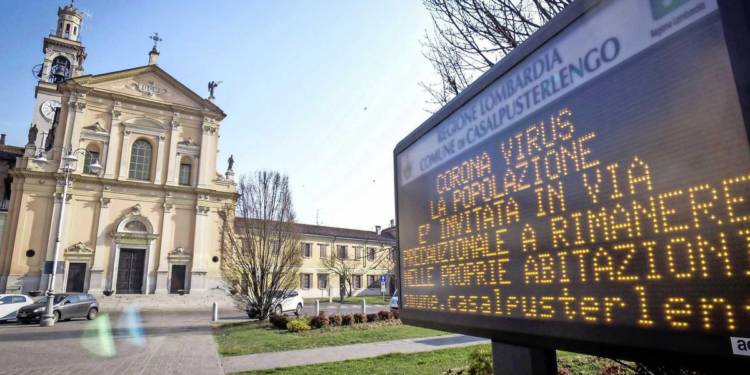 Coronavirus is no longer restricted to China as it has spread to over 24 countries with countries like Iran, Italy, Japan and South Korea having witnessed a huge spike in the cases of the dreaded virus. The virus has now spread across continents and has become a global pandemic.

Italy saw more than 150 confirmed cases of coronavirus last week sparking widespread fears, prompting to lock down at least 10 towns, close schools in major cities and cancel sporting events and cultural touchstones, including the end of the Venice carnival. Early last week, Italy had only 5 confirmed cases of the virus which registered a huge spike during the weekend. In the region of Lombardy, 10 towns were locked down after a cluster of cases suddenly emerged in Codogno, southeast of Milan. Residents were supposed to leave or enter the towns only with special permission, affecting at least 50,000 people and by Sunday night, police officers in surgical masks were waving down cars. Italy Prime Minister Giuseppe Conte announced on Saturday that, “extraordinary measures” would come into force to try to stem the rising number of coronavirus cases.

The alarm bells have spread across Europe as the central identity of the bloc — open borders will be severely tested by the threat of coronavirus. Recently, Austrian officials stopped a train en route Italy to Austria and Germany to test passengers for the virus.  The Austrian interior minister, Karl Nehammer, said the tests came back negative so the train got the “all clear.” France Health Minister Olivier Veran said: “There is a problematic situation at the door, in Italy, that we are watching with great attention.”

The fears of the spread of the virus have prompted countries like the USA and Australia to temporarily deny entry to non-citizens who recently traveled to China. Israel has witnessed two cases of the deadly virus, prompting the nation to ban all foreign nationals who have been to South Korea and Japan in the past 14 days from entering the country. Israel even turned back a South Korean airliner from Ben Gurion Airport with most of its passengers due to fears over the coronavirus. Twelve Israelis on board the Korean Air plane were evacuated and quarantined Saturday night as the jet was held on the tarmac away from the terminal. It was then sent back to Seoul with the rest of the passengers, including some 130 South Koreans, according to a report in the country’s Yonhap news agency. South Korea, on its part, has been put on the highest possible alert by its government as the country has 763 confirmed infections and six deaths.

A terrible case of coronavirus spread outside of took place in the Diamond Princess cruise ship, where over 700 cases have been found out of over 3700 people. Many Indians are stranded in the ship which has now registered the largest number of Coronavirus cases outside of China. There are an unspecified number of Indians among the 3,711 passengers, crew on Board the quarantined ship.

The Cruise ship had arrived at the Japanese coast early last week and was quarantined after a passenger, who de-boarded from the Cruise ship at Hong Kong last month was found to be the carrier of Coronavirus. Initially, 70 people had tested positive for the coronavirus and the number went up to 220 on February 14, 2020. Three Indians aboard the Diamond Princess have been diagnosed with the virus as the ship continues to remain docked and quarantined at the Japanese coast. Cruise ships offer perfect conditions for a viral disaster. With people from various regions of the globe travelling together as passengers or as crew on Board such cruise ships, there is a risk of exponential rise in the number of those infected by the virus on a global level. Take Diamond Princess, for instance, people from 56 different countries are on board the quarantined cruise ship.

Japan which is set to host the Olympics later this year has also taken sweeping measures to contain the virus’s spread in a bid to save the Olympics from getting postponed. Japan has begun suspending major public gatherings to counter the spread of Coronavirus as the number of new cases rises quickly and makes the country one of the biggest sites of infection outside China. The Tokyo metropolitan government said it wouldn’t hold large events such as school graduation ceremonies and entrance examinations for three weeks through mid-March, based on the advice of experts with the city of Osaka taking a matching step. The Olympics would have to be indefinitely postponed if the virus isn’t contained. It all depends on how the summers will kill coronavirus as is being anticipated by scientists and doctors.

While many countries have restricted travel to and from China with India restricting all flights to China, most of the African countries have flights from China coming and going with Ethiopian Airways regularly operating flights to Beijing. The virus has largely spread in China because of the celebrations that took place on the occasion of the New Lunar year during which large scale travel took place in China, resulting in the virus’s spread. The virus quickly spread to other countries because of people coming out of China which prompted many countries to restrict travel from China.

To put things into perspective, a Chinese population of over 2 million resides in the African continent with an increasing number of Africans travelling to China for business and study-related purposes. It is no surprise that Chinese travelers make up the biggest group of customers on Ethiopian Airlines, Africa’s largest carrier. Hence, it is difficult to believe that most countries in the continent haven’t had any case of the virus keeping in mind the booming travel between Africa and China. There are genuine fears that the reason why the African continent hadn’t reported a single case of coronavirus until one recently in Egypt, is because of the poor health infrastructure in African nations which is failing to detect the case of the deadly virus.

In a concerning development, an asymptomatic Wuhan woman who tested negative but infected 5 people is a prime example of the cluelessness of medics in China. A 20-year-old Chinese woman from Wuhan travelled hundreds of miles to another city where she is believed to have infected five relatives without showing signs of infection, scientists in China have said, offering fresh evidence that the new coronavirus can be spread asymptomatically. All five of her relatives developed Covid-19 pneumonia, but as of 11 February, the woman had still not developed any symptoms, her chest CT remained normal and she had no fever, stomach or respiratory symptoms, such as cough or sore throat.

We do not know to what extent China is hiding the numbers of the infected and the dead as very hazy information is coming from China – but after claiming that they have everything in control, Chinese Premier Xi Jinping has now said to his party that coronavirus is the ‘Biggest health emergency China has ever faced’. The virus has turned into a global pandemic.