Muhyiddin Yassin has his feet on the ground 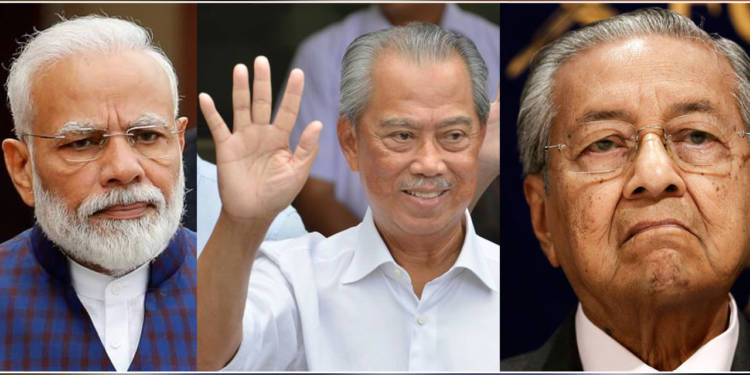 Malaysia has been plunged into fresh political crisis as it seems almost every major party or at least a breakaway faction is currently in the ruling alliance. Last week, Mahathir Mohammad was forced to resign after it became clear that one of the major parties of his Pakatan Harapan coalition was walking out of the alliance. Mahathir’s desperate attempts to hold on to power failed as Malaysia’s kingdom appointed the soft spoken Muhyiddin Yassin, who was the Interior Minister in the Mahathir cabinet. Going by the early signs, Yassin might not repeat the same mistake as Mahathir and would look to reset the bilateral ties between India and Malaysia.

Yassin managed to outmanoeuvre both Mahathir and Anwar as in a shocking turn of events the UNMO which was squarely rejected by the Malaysians in the 2018 elections finds itself back in power. Najib Razak led UNMO was delivered a stinging rejection on the back of serious corruption allegations as once bitter foes Mahathir and Anwar joined hands to defeat Najib’s party. It was agreed well before the elections that Mahathir will eventually pass on the power to Anwar which clearly hasn’t happened as Mahathir in his quest to rule for the full term has managed to lose everything.

Yassin, who famously described himself as a ‘Malay first’ rather than a Malaysian, is a staunch Malay nationalist who was also in the erstwhile Najib Razak cabinet but was shunted out after he protested against the handling of the corruption allegations against Najib. Yassin earlier was the chief minister of Johor, a Malay heartland, and later served in senior posts in central government including as sports minister and education minister before being named deputy prime minister in 2009 in the Najib Razak cabinet.

Yassin who is a cancer survivor has absolutely no love for radical Islamist Zakir Naik, unlike his predecessor Mahathir who preached Wahabism. During his tenure as the Interior Minister, Muhyiddin Yassin had dropped hints of opposition to Zakir Naik. Last year, when the Youth and Sports Minister Syed Saddiq Syed Abdul Rahman had made certain remarks defending controversial and hateful Islamic preacher Zakir Naik, Yassin had made it clear that Abdul Rahman’s remarks did not reflect upon the position of the Malaysian government and would not disrupt the ongoing proceedings on the issue of Zakir Naik.

Yassin had further made it clear that pictures of the Minister with Naik did not suggest that the latter was enjoying political protection of any sort and that Rahman had only represented himself in the matter. He had said, “His actions do not speak for the government or the party. Many have met with Zakir, so it is nothing unusual.”

Yassin was then also quoted as saying, “For me, it doesn’t matter; we aren’t bound by their views. We are bound by the rule of law.” The Islamic preacher had come under fire in Malaysia for bigotry with comments pitting Malaysia’s ethnic and religious minorities against the Muslim Malay majority.

It was in this context that Yassin had hit out at Zakir Naik who has been staying in the country as a Permanent Resident (PR). Yassin had said, “There is no exemption. No one is above the law … It is the same for Zakir Naik as with everyone else.” Then Home Minister had also said, “There are Muslims who want to defend him. True, he is a preacher and a (Muslim) expert, but if he touches on certain (sensitive) matters like what he has (purportedly) done, we cannot allow that.”

It might be a long shot, but to reset the bilateral ties between the two nations, Yassin might look to extradite Naik to India which will signal that he is serious about improving the ties with India. In an important development, officials from both the countries stated that India and Malaysia will look to improve the bilateral ties.

Wee Ka Siong, a lawmaker who is widely believed to bag a plum ministerial post in Yassin’s cabinet stated that improving ties with India is a priority as Malaysian palm oil producers have been suffering due to India’s move to restrict palm oil imports from Malaysia. “Can we just renegotiate? It’s for my country as well as for my people,” Wee told Reuters. “Since we are a new government, let the PM, the new government deal with it. We treasure the friendship with India.”

According to Reuters, an Indian official involved in the dealing with Malaysia said that India is also keen to improve bilateral ties, including palm oil trading, with the caveat that Malaysia keeps out of India’s domestic affairs. There is a possibility that India could also invite the new Malaysian prime minister, Muhyiddin Yassin, for a visit this year, the official said on the condition of anonymity.

Mahathir’s rant against the Citizenship Amendment Act was the last straw for the Indian government who on multiple occasions had made its displeasure known as Mahathir constantly commented on India’s internal affairs. On January 8, India put refined palm oil and palmolein on its list of restricted items which resulted in Malaysia’s January palm shipments to India plummeting 85% from a year earlier to 46,876 tonnes, the lowest since 2011.

For Yassin to improve ties with India, he will need to win the confidence vote in the Malaysian parliament first which is slated to be held on March 9. Yassin who is technically not ‘elected’ but ‘appointed’ by Malaysia’s King has an uphill battle to win legitimacy and improving ties with India will certainly help him garner some much needed support.