Trump is watching every move of Xi JInping 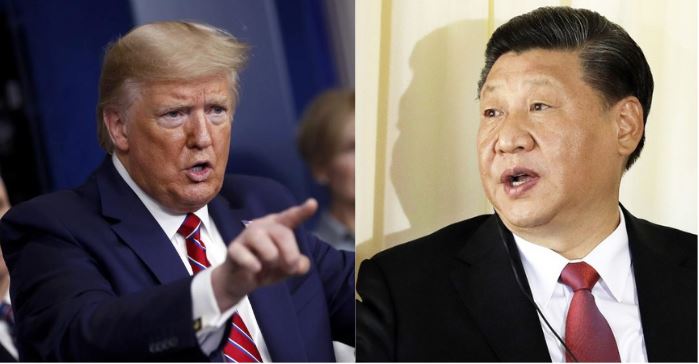 Ideally, the Coronavirus Pandemic which has already killed more than 1,34,000 people across the world apart from infecting more than 2 million, should have led to diffusion of tensions and all international disputes, especially the ones concerning the Dragon given how Beijing’s negligence has unleashed this Pandemic on humankind.

But we do not really live in an ideal world order, do we? In the present world order, China unfortunately happens to be an economic and military giant. The irresponsible Dragon, as mighty as it is, is now trying to make full use of the global misery by stepping up its naval activity in the South China Sea- one of the most disputed, trans-national conflicts.

As per recent reports, the Dragon has started flexing its muscles amidst latest reports of the US Navy docking both its carriers in the Pacific- the  USS Roosevelt and USS Ronald Reagan due to several confirmed COVID-19 cases.

With the US military troops, especially the sailors, getting indisposed with the Chiense virus, China found a wonderful opportunity to press itself strongly in the disputed waters.

China has started threatening Taiwan, trying to corner the island with its naval assets even in the backdrop of the Coronavirus outbreak. On Saturday, China’s first operational aircraft carrier, Liaoning, and five warships accompanying it passed through the Miyako Strait that lies between Japanese islands of Miyako and Okinawa. The Strait lies to the Northeast of Taiwan.

Later this, strike group accompanying the aircraft carrier, consisting of two 052D guided-missile destroyers – the Xining and Guiyang – two 054A guided-missile frigates – the Zaozhuang and Rizhao – and supply ship, the Hulunhu, sailed in waters East of Taiwan and further towards the Southern direction of the island, carrying out exercises.

According to Taiwanese Defence Ministry, Taiwan’s armed forces monitored the carrier group’s progress throughout and “completed relevant actions in response to ensure national security and protect regional peace and stability.”

With the US carriers in the Pacific getting docked, Beijing feels that it has a free hand in the strategically crucial region. In gross violation of the international law concerning Exclusive Economic Zone (EEZ), Beijing ordered the Hai Yang Di Zhi 8, accompanied by six China Coast Guard (CGC) ships to move into Vietnam’s Exclusive Zone, merely months after a similar move had triggered a tense stand-off between the two neighbours.

Only a fortnight ago, things had started heating up between China and Vietnam after a Vietnamese boat had sunk in a confrontation with a CGC ship near the Paracel Islands, that China claims to be a part of its territory.

On Thursday, the Chinese Survey ship, that is, Hai Yang Do Zhi 8, set off from the port of Sanya, along with the six CGC ships and by Wednesday morning the group of these ships was just 92 nautical miles off the coast of  Vietnam’s Binh Dinh province.

The Chinese naval assets thus ventured deep into the Vietnam’s Exclusive Economic Zone (EEZ) setting up the region perfectly for a heated conflict.

The South China Sea is the region where the Dragon’s domineering and expansionism comes out in the open for everyone to see, something that also explains why Beijing has been building far too many military bases on the unihabitated islands in the strategic waterways.

This time around, Chinese misadventures are based on the belief that since the US military is itself coping with the Coronavirus outbreak on several of its assets, this is the time to go for the jugular.

Now, China’s actions in the region have sparked concerns with calls to sanction the actors behind China’s admitted maritime militia- the maintenance of which in itself is a gross violation of international law.

The Philippines too had last week joined the chorus against China after the sinking of a Vietnamese fishing boat.

But the Chinese misadventures have not gone unnoticed. The US too has started flexing its muscles in a massive show of strength in order to make it clear that Beijing shouldn’t live in the illusion of enjoying a free hand in the region.

The United States put on show an amazing formation- an ‘elephant walk’ of its bombers at the Guam Air Force base after China’s bellicose moves against Taiwan and other players in the South China Sea.

The elephant walk- a procession of military aircrafts taxiing close in a unique formation before a minimum interval take off consisted of at least a dozen US Navy and Air Force aircrafts. The Andersen Air Force base in the Guam island is about 1,800 miles east of China.

The timing and location of the elephant walk- a unique formation and a massive show of strength suggest the United States is giving some strong signals to Beijing. The United States military troops have, of course, suffered damage due to the Chinese virus but it remains an overwhelmingly powerful defence force. China shouldn’t assume that it can do what it feels like in the South China Sea.

Beijing and Washington have been trading barbs over the origin of Wuhan infection, with the former even alleging that the US military introduced the virus.  And now things seem to be heating up in the context of China’s misadventures in the South China Sea.

‘China has brought death & destruction,’ A city in Australia has stirred up a storm by cutting all ties with China

‘This will affect China’s credibility in Europe,’ Chinese company loots Italian partner, takes off with data of 1.5 million