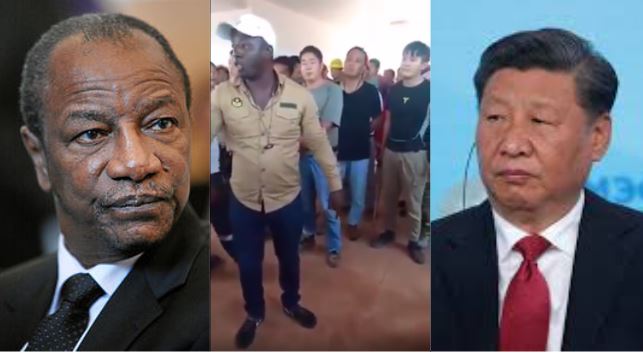 With rising xenophobia in China amidst reports of the Communist Party of China (CCP) targeting people of African origin under the pretext of cracking down on the Wuhan coronavirus, things seem to have started heating up in the West African country of Guinea.

According to reports from Africa, Guinea has arrested Chinese nationals and demanded safe return of its citizens from China. A video trending from the Republic of Guinea shows the moment Guinea Government arresting all Chinese Nationals in the country till China returns its citizens safely.

Sharing the video, a social media user said, “GUINEA GOVERNMENT TOOK A DECISIVE MEASURE,SEIZED ALL CHINESE NATIONAL TILL ALL HER CITIZENS RETURN SAFELY.”

There has been a lot of furore in the African continent over racial attacks against Africans in China. Even the US Consulate had issued a notice, warning, “The US Consulate General advises African-Americans or those who believe Chinese officials may suspect them of having contact with nationals of African countries to avoid the Guangzhou metropolitan area until further notice.”

Meanwhile, the Chinese State media has been denying the reports of brutalities that are being committed on the people of African origin in the country. Its denials and assurances however do not hold any significance given its largely discredited State Media and the rising anti-China sentiment in the African Continent.

What further corroborated the reports of brutalities being committed in China, is the fact that McDonalds apologised after a signboard surfaced that barred Africans from entering its restaurants in China.

The reported measures taken by the Republic of Guinea is a first of its kind initiative taken by an African government amidst the ongoing racial attacks and brutalities against the African-origin people in China.

The racial profiling and targeting of Africans in China is racism of the worst kind, and can be described as peculiar to this part of the world in today’s time.

The fact that a small country situated on the West African Coast took such a drastic measure shows how China’s credibility and global stature has taken a huge hit.

Meanwhile, China has dismissed reports of its citizens getting arrested in Guinea and called them rumours. The Chinese embassy in Guinea issued a statement on the matter that said, “The Chinese diplomatic mission, as always, will make every effort to safeguard the safety and legitimate rights and interests of Chinese citizens in Guinea.”

Apart from Guinea, there is palpable discontent in other countries like Kenya and Nigeria. African websites are also hitting out at domestic governments over the Chinese loans that have piled up in the region.

The racial attacks against Africans in China are being seen as a wake-up call, and from what happened in Guinea it seems that China is bracing for fresh trouble in the African continent- its investments, BRI projects and extensive loans in the region have come directly under threat amidst the ongoing Pandemic.

‘We’ll take them, don’t put restrictions on us,’ Pakistan swiftly takes back its citizens after UAE threat

Is Kim Jong Un dead? Is he alive? Is that a coup?- An interesting new story is developing in North Korea