‘We must investigate China,’ As European Union finally speaks up, the biggest nightmare for China is here

This is by far the worst thing happening to China 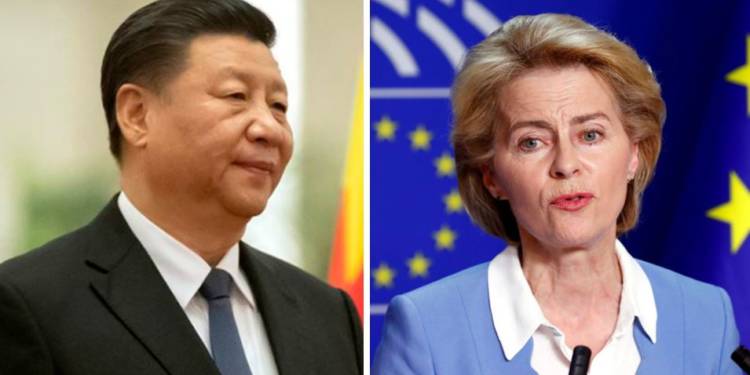 The Coronavirus Pandemic is pushing countries over the edge when it comes to the public perception of China, and governments across the world which were once wary of speaking up against Beijing’s domineering are growing more and more critical of the mighty Dragon.

Political sentiment within countries like the United Kingdom has never been as anti-China as it is today, and this resentment goes right to the top levels of the British political echelons. Acting Prime Minister Dominic Raab has himself spoken of the “hard questions” that need to be answered about how the Wuhan virus spread its deadly wings across the globe.

Meanwhile, the economies of countries like Italy, Spain and Germany have collapsed in face of the ongoing Pandemic and these countries have already moved to alter and tighten their FDI norms in order to prevent a hostile takeover of their companies by Chinese firms.

Growing anger within Europe against Chinese cover-up and mishandling of the COVID-19 outbreak, coupled with the supply of faulty medical gear to the Continent, has compelled the European Union to take a stance against Beijing.

In fact, the European countries had tightened their FDI norms only after the European Union had issued new FDI guidelines keeping the damage done by Coronavirus and the vulnerable position of the European companies in mind.

Beijing also realises how losing a trading partner in European Union can prove a huge setback for its exports-based economy and has been continuously trying to wage a propaganda war in Europe in a desperate attempt to escape unscathed.

Recently, the European Union also prepared a report rebuking Beijing’s State-backed “disinformation campaign” about the Coronavirus Pandemic, but watered it down before publishing, under Chinese pressure.

The European External Action Service (EEAS), which is being accused of bowing down to Chinese pressure after Beijing’s diplomat sought to block the damning report, has denied succumbing to external influence. But reports of the EEAS toning down its criticism of China have already paved the way for a ‘revolt’ within the European bloc.

On Monday, the European People’s Party, which is the largest group in the European Parliament said that it was “revolted” by the reports of the EEAS succumbing to Chinese pressure.

Sandra Kalniete, Vice-Chairwoman of the EPP in charge of Foreign Affairs said, “I urge High Representative Josep Borrell to fully explain in detail and without any delay, what happened to the report.”

Josep Borrell has himself admitted Chinese pressure but has unwittingly claimed that Beijing was unsuccessful in manipulating the European Union. But several stakeholders within the bloc are perturbed.

Markéta Gregorová, a Czech member of the European Parliament said that EU’s image has taken a hit after reports of toning down China’s criticism under pressure from Beijing. He said, “Whether true or not, the damage to our reputation is done and we inadvertently communicated to our adversaries that harassing and intimidating our diplomats will work and they should continue.”

With prominent members like the Czech Republic and Sweden speaking up against Beijing openly, the bloc itself feels compelled to take some kind of stance against China and shed its perceived image of being tilted towards Beijing.

European Union proceeded with a balanced view of China for the longest time in face of the Wuhan virus Pandemic compared to other powers like Australia and the United States that have been escalating the anti-China narrative ever since the Pandemic took a grip of almost the entire globe.

But now the European Union too has grown aware of Beijing’s crisis profiteering and domineering, which is why the European Union’s Competition chief Margrethe Vestager too has asked the member-states of the regional bloc to buy stakes in the capital-starved companies to keep the Chinese away.

Many countries have been economically colonised by China and the European Union too is growing awareness of this threat which is not at all a good signal for Beijing.

China enjoys very good trade relations with this part of the world and though it may not seem like a major setback until one realises that the European Union is an 18 Trillion Dollars economy that Beijing stands to lose in case of China-EU ties souring due to the Coronavirus Pandemic.

Worse still, the European Union too has joined the worldwide chorus for investigations into the origins of the Coronavirus Pandemic. This is, by far, the worst news coming for Beijing ever since it started drawing flak for mismanaging the Pandemic and countries across the world raised suspicions about the virus originating from a Wuhan lab.

The European Commission president Ursula von der Leyen has called on China to join the investigations into the origins of the Pandemic, arguing that this will ensure greater transparency and an “early warning” system in case of future outbreaks.

Last year, China’s trade surplus with the European Union had expanded to a mind-boggling 62 Billion Dollars but with anti-Beijing sentiment rising within the regional bloc, there are talks of reassessing the supply lines and producing “as many things as possible in Europe.”

Apart from trading relations, China’s Belt and Road Initiative (BRI)– Beijing’s ambitious project to access the European markets through land and maritime routes, itself seems to be in the doldrums. The project won’t be able to reach its ultimate end if EU-China ties go Southwards.

China has massive investments in Europe that have risen manifold in the past one decade or so, and Beijing’s colossal transport-infrastructure projects, such as the Yiwu-London rail line, are all a part of its attempts to ensure seamless access to the 18 trillion dollars European Union economy, which is the second biggest economic entity in the world after the United States.

What purpose will such massive transport-infrastructure projects serve if China loses its prolific trading partner- the European Union. Beijing has invested extensively in this part of the world, and it is now running against the tide of public opinion in the Continent to somehow salvage its humungous investments and interests in the region.

European Union however is itself trying to keep its house in order after Brexit and apprehensions of ITAXIT. It doesn’t want to juxtapose itself against the wishes of its member-countries which is why it is gradually giving in to the anti-Beijing sentiment even after holding on against the tendency of criticising China’s irresponsible behaviour for the longest time among all global powers.

‘We want Taiwan in WHO,’ the Taiwanese cause takes the centre stage in USA’s war with China