WHO's loyalty to China is mind-boggling 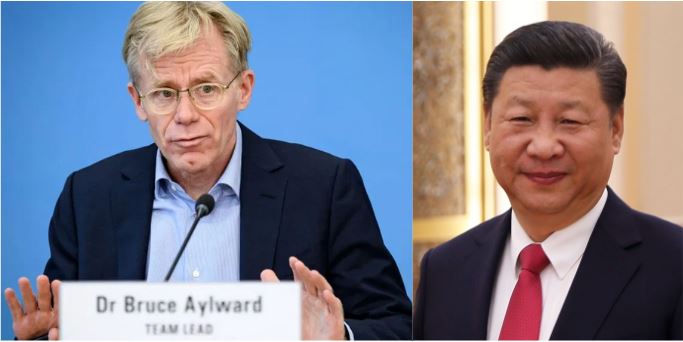 The WHO’s assistant director-general Bruce Aylward was recently in the news for his botched interview to a Hong Kong based media outlet where he abruptly disconnected the video interview after being quizzed about Taiwan.

Bruce Aylward is the same guy who led a “fact finding” mission to China in February and gave glowing reviews to the Chinese Communist Party and wrote a report which was a spitting image of the propaganda articles circulated by the CCP. Turns out, Canadian epidemiologist Bruce Aylward has been turning down repeated invitations to testify to a House of Commons committee which has prompted the Members of the Canadian Parliament to issue mandatory summons to Aylward to testify on the Wuhan coronavirus.

Canadian Members of Parliament have served mandatory summons to Aylward after he twice turned down requests to testify through video conferencing as Aylward is currently in Geneva, Switzerland. Commons health committee voted unanimously to issue Aylward the mandatory summons, which can only be enforced once he returns to Canada.

Recently, during an interview with Hong Kong-based RTHK journalist, the WHO’s assistant director-general Bruce Aylward ended the video interview after the journalist quizzed him about Taiwan’s efforts to combat the Wuhan virus. When asked by the RTHK journalist if the WHO would reconsider Taiwan’s membership, Aylward initially pretended that he didn’t hear the question. The journalist again attempted to ask the question but Aylward was quick to dismiss it and asked her to move to the next question. But the journalist didn’t budge and again sought to ask about Taiwan, Aylward abruptly ended the video interview.

The journalist then proceeded to call him again and asked Aylward about his thoughts on how Taiwan has done to combat the virus. Shockingly, Aylward forgot his position at the WHO and started behaving as a spokesperson for the Chinese Communist Party and exclaimed, “Well, we have already talked about China and you know, when you look across all the different areas of China, they have all done quite a good job.”

It has long been a dream of the Chinese Communist Party to claim Taiwan as a part of China but in reality, the CCP has no jurisdiction rights over Taiwan. To see Aylward directly toe the line of the CCP is a sign that the WHO officials are being thought policed. There is no doubt that Chinese funding and influence has overwhelmed WHO and destroyed the institution as it were.

The same Dr Aylward led a WHO joint mission to China during the peak of the virus’ outbreak in the country. At that time the videos coming from the hospitals of Wuhan were nauseating with dead bodies lying on the aisles of hospitals.

The Aylward led mission came out with a shocking report that sang endless praises of Xi Jinping and the CCP. After the mission, Aylward was quoted, “It’s the unanimous assessment of the team that they (China) have changed the course of this outbreak. What was a rapidly escalating outbreak has plateaued and then come down faster than one would have expected,” and he further added that hundreds of thousands of people in China did not get this because of this response.

While the Communist government has imposed a two-month lockdown on Wuhan, the 40 page WHO report meekly mentions the lockdown as “strict traffic restrictions” and “the cordon sanitaire”. The report lauds China’s epidemic response measures — but conveniently ignores the late-December / early-January dates that might implicate the party’s initial mismanagement of the crisis.

If there were any doubts on the neutrality of the report, a line in the report reads that: “In the face of a previously unknown virus, China has rolled out perhaps the most ambitious, agile and aggressive disease containment effort in history.”

The WHO in its report listed the origins of the virus as one of the “key unknowns” in a bid to please their Chinese masters. Finding the index case is paramount to understand the nature of the virus and accordingly plan containment measures. The WHO had one job to do that is to find the index case, which it grossly failed to do.

Aylward has made no attempts to hide his bias as he has repeatedly praised China’s leadership and, during one press conference, shockingly stated that – if he was infected with the disease – he would want to be treated in China. Truth be told, had Xi Jinping been infected with the virus even he wouldn’t have preferred to be treated in China- such is the state of the country’s healthcare. The same Xi Jinping was absent from the public eye during the virus’ peak in China.

The loyalty of these WHO officials to Xi Jinping is unbelievable. One must question and investigate as they may well have personally received huge amounts from China to continue to toe its line.

The secret nuclear cities of Russia are now out in the open, thanks to coronavirus pandemic