Xi Jinping is having a tough time over Taiwan 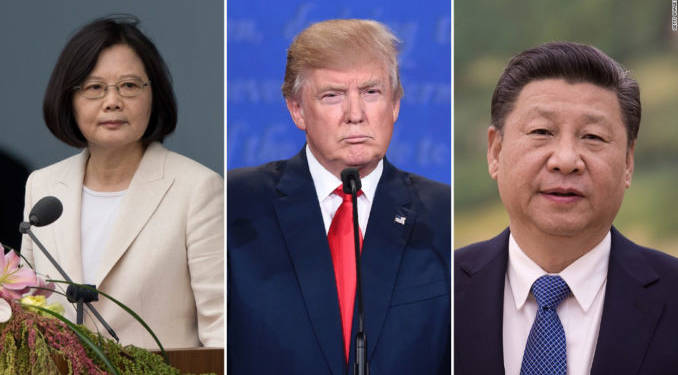 The China-made pandemic has seen Taiwan rising as an independent country as it has shown that with democracy and transparency, the Wuhan coronavirus can be defeated. Unlike China, Taiwan is enjoying tremendous goodwill as the self-ruled island is now helping countries across the world to fight the virus through its mask diplomacy which has greatly enraged China who considers Taiwan as a dissenting province who must be brought back to its fold.

In a recent development, some retired Chinese military leaders have suggested the USA is not in a position to defend Taiwan at present as the US Military battles the Wuhan coronavirus and hence, the time is ripe to bring back Taiwan.

China is witnessing a rising nationalist sentiment as there are growing calls to bring back Taiwan to its fold, especially considering the fact that the US Military has been crippled by the Wuhan coronavirus as its aircraft carriers are stuck in the Pacific region with the warships unable to move as the virus is spreading on the warships at an alarming rate.

The USS Theodore Roosevelt which has been stationed at Guam has witnessed over 400 cases of the Wuhan coronavirus as the aircraft carrier’s 4,865-odd crew has been crippled by the virus. Similarly, the warships of USS Ronald Reagan, USS Nimitz and USS Carl Vinson have all witnessed their crew members contacting the Wuhan coronavirus.

The Chinese Communist Party likes to live in an alternate universe as it continues to claim that Taiwan is a part of China, where in reality, Taiwan has been an independent nation which has been running its own governments since 1949. China believes that Taiwan must be brought back to its fold and won’t hesitate to apply force if needed.

It may be reminded that the USA recently passed the TAIPEI Act much to the chagrin of China as the USA attempts to scale up its engagement with Taiwan and help the latter gain diplomatic recognition, which it so desperately needs. Importantly, the TAIPEI Act also seeks to safeguard Taiwan against any Chinese aggression. The law mandates that the US President is required to provide weapons to Taiwan that mitigate the looming Chinese military threat.

The Communist Party of China wasted no time in labelling the act as an “evil act” as it claimed that the act “sabotages China’s famed One China principle”. A stung Chinese government also warned the USA that it will have to bear the consequences of its actions.

China’s Foreign Ministry Spokesperson Geng Shuang said, “We strongly urge the U.S. to correct its mistake, refrain from implementing this act and obstructing other countries’ pursuit of relations with China. Otherwise, it will be met with resolute countermeasures from the Chinese side.”

There is no doubt that after the world collectively defeats the virus, Taiwan will get increased recognition as from Australia to the US and even the European Union have praised Taiwan’s efforts to help the world with the US and Australia aggressively pushing for Taiwan’s inclusion in the WHO. Taiwan’s inclusion in the WHO will just be the beginning as riding on the USA’s support, it will gain membership of similar international organisations which till date have continued to ignore the island nation due to the Chinese influence and pressure.

The possibility of Taiwan getting international recognition is the worst nightmare for the CCP as not only will it make it impossible for the dragon to take back Taiwan, the mainland might witness a wave of pro-democracy protests on the lines of what happened in Hong Kong in 2019.

Thus the retired military generals have sensed an opportunity as they feel that the US military will not be able to defend Taiwan despite being mandated by the TAIPEI Act.

The fact that Taiwan is getting showered with praises from across the world for its mask diplomacy at a time when the world is rejecting China’s faulty PPEs has further enraged the dragon who might go for the kill to bring back Taiwan to its fold.

More than 20,000 cases in Russia in just 2 days: After months of hiding its Coronavirus cases, the truth is finally out