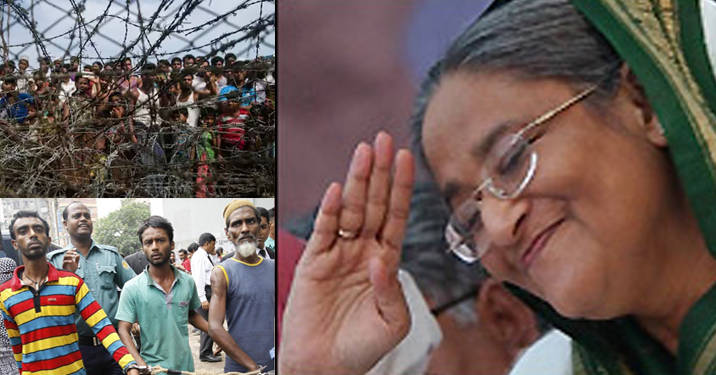 Dozens of Rohingya refugees stranded at sea for weeks are being relocated to a controversial flood-prone ‘Bhashan Char’ island in the Bay of Bengal by Bangladesh authorities. The 28 Rohingya were taken to the island late last week instead of the ‘Cox Bazaar’ camp as authorities were afraid they might be infected with the coronavirus.

In the wake of the global Wuhan virus pandemic that is highly contagious, the Rohingya refugees have emerged as the single greatest cause of worry for the country of Bangladesh.

Over 1.1 million Rohingyas had fled Myanmar after persecution in 2017 and landed on the Bangladesh shores where they have been living since then.

Although, initially Dhaka allowed the refugees but the increasing number of refugees has wreaked havoc on the country’s resources and their involvement in criminal and terror activities has incited an anti-Rohingya wave across the country.

The Sheikh Hasina government has been on the fence about how it wants to get Rohingyas off its back as repeated attempts to deport them to Myanmar through major International bodies has borne no fruit.

“In terms of regional security, I would like to say that more than 1.1 million Rohingya citizens of Myanmar fled to Bangladesh in the face of persecution and they are a threat to the security not only for Bangladesh but also for the region.” PM Sheikh Hasina had said last year about the Rohingyas. She has on several fronts confessed that Bangladesh is not able to keep up with the large influx of refugees and that the nation needs a viable alternative solution.

The authorities had announced in October last year that around 7,000 refugees had agreed to shift to the Bhashan Char-muddy silt islet in the cyclone-prone coastal belt from the over-crowded ‘Cox Bazaar’ camp. However, due to certain administrative and international bodies’ interventions, the move could not lead to any fruition.

But coronavirus has presented the Bangladeshi authorities a golden opportunity to move the Rohingyas to the dangerous island which basically is one big swamp and a disaster waiting to happen.

In the past half-century, powerful cyclones have killed hundreds of thousands of people in the Meghna River estuary where the island is located. The island had emerged from the sea only in August last year and there are fears that the island won’t be able to withstand the annual monsoon and the subsequent violent storms.

Therefore the move to place the suspected coronavirus Rohingya refugees to the floodplain island is being seen in a light to deliberately eliminate the refugees. The island becomes partially submerged during monsoon season, which is rapidly approaching. The UN refugee agency UNHCR has said time and again that comprehensive assessments were needed before anyone is moved to the island.

Subsequently, the Rohingya community has started staunchly opposing this move of the authorities.

Bangladesh last year constructed facilities for 100,000 people on Bhashan Char—saying they needed to take the pressure off crowded border camps that are home to almost one million Rohingyas.

The 28 refugees are the first of the many Rohingyas to be sent to the island. It is still not sure if the facilities at the island are even operational and therefore moving them to a flood-prone island, vulnerable to devastation by cyclone shows how desperate Bangladesh is to get rid of them.

‘Drop the inquiry,’ Pakistan was probing a scam by China but everything changed when China sent a warning